“Government is a dangerous servant and a fearful master.” — George Washington (attributed)

Last Friday, the government reported another disappointing jobs report. Joe Biden said that the tepid increase in jobs meant that the government needed to fund even more deficit spending.

I was on KitcoTV (Canada’s equivalent to CNBC) and told the host that the Biden administration has discovered a clever way to indirectly push through a $15 minimum wage — keep extending unemployment checks and thus force companies and employers to raise wages and bonuses to get people to go back to work.

The Biden administration also supports an expansionary fiscal and monetary policy that increases the demand for goods and services. Unions benefit the most. It is a brilliant political strategy.

The biggest downside is that job growth will stay below expectations and will result in stagflation. Even the Biden budget expects an economic growth rate of only 1.8%, much less than the pre-COVID-19 Trump years. But it is a trade-off Biden is willing to do to placate the unions. 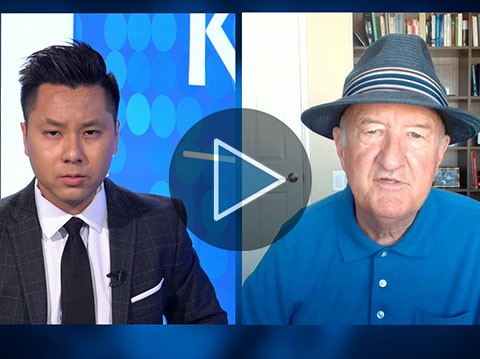 Where to invest during a period of resurging inflation and slow growth? I recommend both growth and income stocks, but the high-income “value” stocks and funds have clearly outperformed growth this year.

Our average position is up 22% year to date! For details about how to profit personally, click here.

I’ll be speaking at the Orlando MoneyShow this Thursday-Saturday and will be doing my special two-hour session on “Puzzles & Paradoxes in Money & the Economy,” based on my popular class at Chapman University. See you at The MoneyShow Orlando | June 10 – 12, 2021 | Event | Investment Conference.

The Most Profitable Investment You Can Make This Year

I met a long-time subscriber last month who told me how pleased he is with my recommendations over the years. “I’ve made a ton of money,” he said with a big smile, referring to my newsletter and trading services.

I asked him, “Tell me, have you ever used some of those profits to come to my big show, FreedomFest?”

He responded, “For years I heard about your show, how good it was. Well, finally I decided to go in 2019 when you had Kevin O’Leary and John Mackey debate the virtues of capitalism…and you interviewed Penn Gillette and Glenn Beck on stage. It was one thrill after another. I even made a big gain on an investment there. It’s the most rewarding, profiting and fun conference I’ve ever been to, and I kicked myself for not going sooner.”

He will be attending again next month in South Dakota.

My staff tells me that hundreds of people are coming to this year’s conference for the first time and are going to turn the trip into a family vacation. South Dakota is a hot destination.

If you have not been to FreedomFest, don’t procrastinate anymore! Come join us this year and see what you have been missing.

Next month’s FreedomFest, July 21-24, will be special for my subscribers. We are having a private meeting and a most memorable reunion to celebrate 41 years of Forecasts & Strategies. The subscribers who attend will receive a 2021 silver dollar and an autographed copy of “The Maxims of Wall Street.” Plus, I will share with those attendees the name and symbol of a penny stock that could triple in value in 2021. They will also be able to meet with top investment gurus like Jim Woods, Alex Green, Jeff Phillips, Adrian Day, Rob Arnott and many more.

However, you must be there in person to take advantage.

I’m excited to announce that Larry Arnn, the fiery president of Hillsdale College, has just confirmed that he will be a keynote speaker at this year’s FreedomFest in Rapid City, South Dakota. It took me 10 years to get him.

Dr. Arnn has faith in both God and man. He defied the governor of Michigan and went ahead with Hillsdale’s in-person graduation ceremonies last June. More than 2,600 students and family members showed up. The college took every precaution to make the event safe, and they succeeded. Nobody came down with COVID-19. 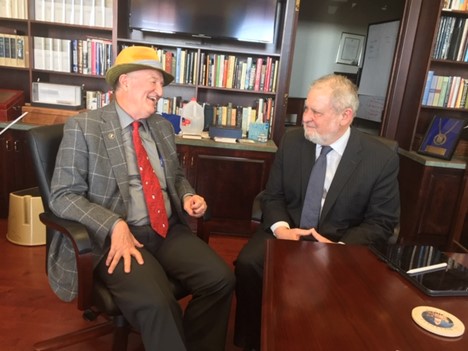 Your editor visiting Larry Arnn in his Hillsdale office in 2019.

In defense of the First Amendment right to the freedom of peaceful assembly, Arnn stated, “Since 1856, the college has exercised those rights by holding annual commencement exercises — including during the Civil War, World War I, the 1918 Pandemic, the Great Depression and World War II.”

It was gutsy for Hillsdale to do its graduation in 1918, and the administration pulled it off again in 2020.

We’re adding 50 new registrations every week. We already have more than 2,200 attendees signed up. We expect a record turnout and could sell out.

We also just posted the full schedule with all 250 speakers, panels and debates. Go to 2021 Agenda – FreedomFest.

A few years ago, a Gallup poll showed that a majority of college students and young millennials favored socialism over capitalism. It was a wake-up call among free-market think tanks and freedom organizations to do a better job of making their case for economic freedom.

I’ve been doing my part by giving talks on college campuses to reverse the trend, “What’s better than Democratic Socialism? Democratic Capitalism!” Check out the following:

How to Get Rid of a Bad Idea (Democratic Socialism) and My Secret Plan to Convert Students to Free-Market Economics and Sound Investing.

But now things are changing.

A survey in 2021 asked Latinos to choose between two statements. The first was unadulterated Milton Friedman: “Some people say free-market capitalism is the best form of government because it gives people the freedom to work and achieve.”

The second was what we might call the Alexandria Ocasio-Cortez option, “Other people say that socialism is the best form of government because it is fairer and more equitable to working-class people.”

Almost two-thirds, 63%, of Latino respondents opted for the Friedman position, against only 17% for the AOC line! Source:  More Latinos Bid ‘Adios’ to Democrats – The Wall Street Journal

I hope this is a new positive trend.