How to Get Rid of a Bad Idea (Democratic Socialism)

“Avoid investing in countries with high levels of socialistic or government regulation of business. Business growth depends on a strong free-enterprise system.” — Sir John Templeton (quoted in “The Maxims of Wall Street,” p. 137)

The great Austrian economist Ludwig von Mises (1881-1973) was once asked, “What’s the difference between socialism and capitalism?”

He answered, “The stock market.” Countries that adopt high levels of socialism and government intervention see their stock markets languish or even disappear.

When communists take over a country, the first thing they do is shut down the stock market. When Vladimir Lenin and the Bolsheviks took over Russia in 1917, they closed the St. Petersburg stock exchange and converted it into an art museum.

There is no stock market in Cuba or Venezuela.

Similarly, the countries that have nationalized their major industries soon see their stock markets disappear. For more than 50 years, the Buenos Aires Bolsa languished due to Juan Perón and the Perónist takeover of Argentina.

Argentina was not able to create the Argentine stock index MERVAL until 1986. Even then, it underperformed the world markets until 2014.

Since the financial collapse of 2008, the appeal of socialism has advanced in the West, including in the United States. Witness the Occupy Wall Street movement, the popularity of socialism on college campuses and the Democratic candidates for president supporting state intervention in the economy.

Howard Schultz, the long-time CEO of Starbucks, considers himself a “progressive” and has been a lifelong Democrat. However, he recently became so disgusted with the direction of the Democratic Party’s move toward outright socialism that he left the party to consider running for the presidency as an Independent.

He’s also not happy with the current crop of Democratic candidates, who are falling all over each other to see which one can promise more “free” goodies from the government and more killer regulations that could destroy the American way of life.

You can’t get rid of a bad idea just by opposing it. You have to offer a better alternative.

And that alternative is “Democratic Capitalism!”

John Mackey, CEO of Whole Foods Market, calls it “conscious capitalism” and has stated that it is a capitalist philosophy that can benefit both workers and executives.

The father of democratic capitalism is Henry Ford. In 1914, the Ford Motor Company had record profits from his Model T manufacturing plant in Highland Park, Michigan (right outside Detroit).

Ford made the dramatic announcement in January 1914 that he was more than doubling the wages of his workers to $5 a day. Investors and labor would benefit from the company’s success. It was a revolutionary decision that made headlines around the country.

This week, I’m in Michigan. Yesterday, I visited the original Ford plant where more than one million Model Ts were built yesterday. (See photo.) I wanted to pay homage to the man who changed the world in terms of labor-capital relations for the better. That is, Henry Ford destroyed the Marxist notion that capital and labor were enemies and that capitalism exploits the worker. 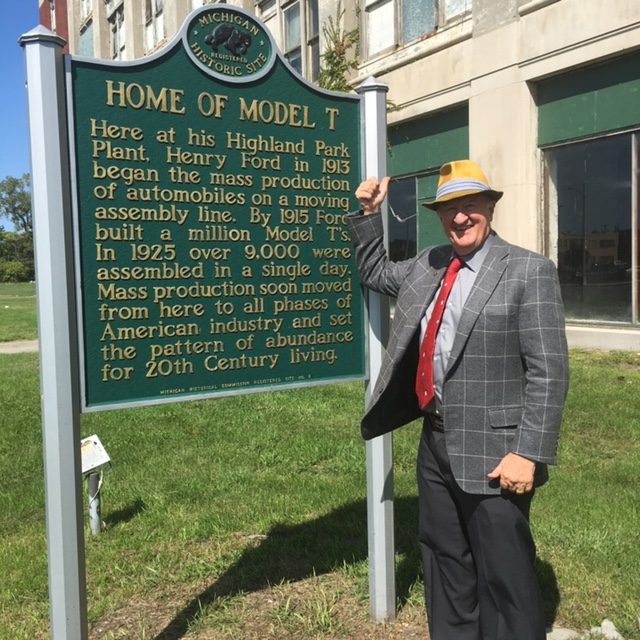 Mark Skousen stands in front of the site of the original Ford plant in Highland Park, Michigan.

Tonight, I’m speaking at Hillsdale College on “How to Get Rid of a Bad Idea (Democratic Socialism): With a Better Idea — Democratic Capitalism!” I’ll have a full report on the reaction of the students in Monday’s Forecasts and Strategies hotline.

If more companies provide incentives to workers through profit-sharing and stock options, democratic socialism will lose its appeal.

By the way, if you’re interested in what could be “the greatest private equity investment of all time,” you’re in luck. I’ve found it… and you don’t need to be an accredited investor to get in. Click here for free access.

I’ll appear in costume as Benjamin Franklin at the Philadelphia MoneyShow; you won’t want to miss it!

“No nation was ever ruined by trade.” — Benjamin Franklin

On Constitution Day, I was invited to address the prestigious Wisconsin Forum in Milwaukee. It was my fourth appearance, the most of any speaker in its illustrious history. Past speakers have included Milton Friedman, Henry Hazlitt, Ron Paul and William F. Buckley, Jr.

I talked about the dangers of executive power — placing too much authority in the hands of the one man or woman who is running the country. I also highlighted the potential abuse of executive orders – the power that Congress gives to the president to enable him or her to act unilaterally during “national emergencies.”

President Donald Trump has declared “national emergencies” to build the wall along the Mexican border and to impose tariffs on Chinese imports. Both are dubious uses of executive orders. The fact that one man, even the elected U.S. president, has such authority is scary.

The Founding Father Benjamin Franklin, who was a famous supporter of free trade, warned us that our republican form of government could turn into tyranny sometime in the future if we gave too much power to the executive. I ended my talk with this ominous warning that Franklin made on June 2, 1789, at the Constitutional Convention in Philadelphia:

“I am apprehensive that the government of these states may in future times end in a monarchy, and a King will the sooner be set over us… But this catastrophe I think may be long delayed, if in our proposed system we do not sow the seeds of contention, faction and tumult.”