Are We Heading for a Recession?

“I see a precarious economy that is built on debt — both household debt and corporate debt. I see a number of serious shocks on the horizon that could cause our economy’s shaky foundation to crumble.”

It could have been said by super bear and FreedomFest regular Peter Schiff. In fact, he did say something similar in our Global Economic Summit at FreedomFest, but this doom-and-gloom prediction was made by Senator Elizabeth Warren.

Of course, ironically, she will be proven right, IF the United States adopts her policies such as forgiving student loans, providing universal health care and raising the minimum wage to $15 an hour.

In the past couple of months, there have been warning signs of a slowdown in the global and U.S. economy, especially in durable goods orders and manufacturing, both leading indicators.

Last month, the government announced that real gross output (GO), the broadest measure of economic spending, rose only 1.6% in the first quarter, much less than real gross domestic product’s increase of 3.1%. Total spending in the economy almost hit $45 trillion.

The supply chain (what the government calls intermediate inputs) declined slightly from the fourth quarter. If that trend continues, it would predict a recession ahead, and the end of the 11-year bull market.

But it’s still too early to tell if this will happen. I am watching this carefully, but for now we remain fully invested. For further updates on GO, go to www.grossoutput.com.

As said by Andrew Hunter, senior U.S. economist at Capital Economics, “We’ve been expecting the economy to slow over the course of this year for some time, mainly because of domestic factors.”

He added, “But I think the downside risks have really increased over the past few weeks with the escalation of trade tensions.”

The longer the trade war lasts with China, the more likely we will suffer a recession.

The stock market has held up well in the face of this threat, but that’s because interest rates have declined.

Eventually, if the trade war isn’t resolved, the stock market will tumble, too.  And that could spell trouble for President Trump’s chances for reelection.

What’s in Store for Next Year? ‘The Most Dangerous, Polarizing Figure Since Gandhi’

FreedomFest was a big hit this year, with nearly 2,000 attendees. For audio recordings, go to www.miracleofamerica.com.

We created quite a buzz when we announced our theme and keynote speaker for next year’s FreedomFest, which is scheduled for July 13-16, 2020, at the Paris Resort, Las Vegas. (Note that this is Monday through Thursday, not our usual end-of-the-week schedule.)

Watch the three-minute trailer here, and be prepared for the surprise keynote speaker, who has been called “the most dangerous, polarizing figure since Gandhi” and “the most important spokesman for liberty and civil justice since Milton Friedman.” The link and password to watch the video are https://vimeo.com/346787688 with password: ff2020.

When one of my students from Chapman University saw who the keynote speaker is for next year, he responded: “I must be dreaming. Unbelievable!!!!! You know I will be there in an absolute heartbeat! Every year, FreedomFest only gets better and better.”

At FreedomFest, we told attendees that they could sign up for next year’s big show for a one-time only super discount rate of $299 per person. Over 200 people signed up on the spot.

Special note: my FreedomFest talk on “Call of the Wild West: Jack London, Rugged Individualist or Socialist?” will air at 1 a.m. EDT this Monday (11 p.m. PDT Sunday night) on C-SPAN BookTV. Other sessions from FreedomFest will air this weekend. 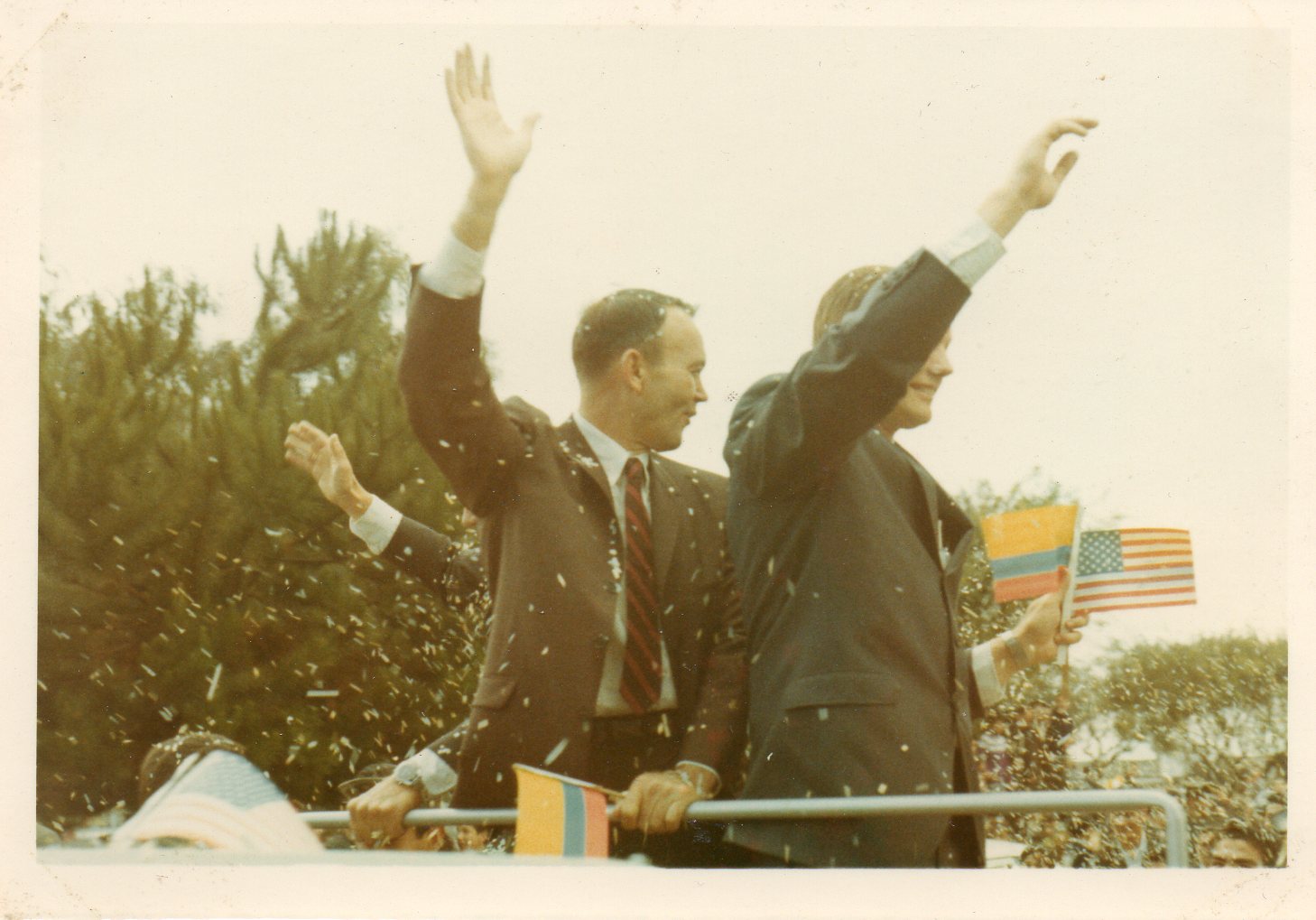 Fifty years ago, I was in Bogota, Colombia, as a Christian missionary and I snapped this photograph of Buzz Aldrin (back), Michael Collins (left) and Neil Armstrong (right), on their world tour in celebration of their landing on the moon on July 20, 1969.

Philadelphia MoneyShow, Sept. 26-28, Philadelphia 201 Hotel: I’ll be making a special appearance dressed as Ben Franklin! Other speakers include Ken Fisher, Dennis Gartman, Tom Sosnoff and John Buckingham. You can obtain free admission to the MoneyShow as my guest by calling 1-800-970-4355 and by mentioning pass code 048316.

Until then, good investing, AEIOU,

The Democratic Party, which has exhibited such socialistic tendencies that I am nicknaming it the Democratic Socialist Party, pushed through the Raise the Wage Act in a 231-199 House vote, lifting the federal minimum wage from $7.25 to $15 an hour for “nearly all” American workers by 2025.

Now it goes to the Senate. Senator Mike Lee told me at FreedomFest last week that it has “no chance” of getting through the Republican-controlled Senate. Nevertheless, some states have already adopted the $15 an hour measure: California will reach $15 an hour in 2022, Massachusetts in 2023, New Jersey in 2024 and Illinois and Maryland in 2025.

Minimum wage legislation is one of the worst examples of bad economics, yet it appears on the surface to be good politics. It makes legislators look as if they are compassionate and concerned about the well-being of its poor and middle-class workers, but what if a $15 minimum wage ends up putting people out of work, or having them cut back their hours?

A reduction in hours is exactly what Senator Bernie Sanders did when his campaign staff complained they were earning less than $15 an hour. He responded by boosting their pay to $15 an hour but cut back their hours!

It is amazing how misguided the Democrats are when it comes to understanding basic economics. Whether it’s advocating the minimum wage, Medicare for All, or free college tuition, they fail to understand the principles of accountability (user pays), or welfare (help those who need help, but don’t help the well to do).