Why the Stock Market Soared After the Democrats Won

We were told that Wall Street reacted favorably to the November elections because investors like gridlock, or divided government.

But now, it is clear that the Democrats will take over not just the executive but the legislative branch in Washington — the White House, the House of Representatives and the Senate — after the Democrats surprised the country by winning two Senate seats in Georgia. We were told by John Fund, one of the country’s top political experts, who spoke at our Global Financial Summit after the November elections that the Democrats had “no chance” of winning in Georgia.

But they did. President Trump’s supporters are again claiming voter fraud, but the fact is that the Democrats had a better ground game. They spent more dollars, and they had more enthusiasm for their candidates.

Meanwhile, both Republican senators were weak candidates. In addition, Trump blundered before the election by threatening the Georgia Secretary of State, and he portrayed the Republicans as looking like Scrooge for not supporting his belated call for $2,000 stimulus checks whether everyone needed the help or not. The Democrats supported Trump’s idea and it all conspired to work against the Republicans in the Jan. 5 special election to fill both of Georgia’s U.S. Senate seats.

So why did the Dow hit all-time highs after the Georgia election, despite the riots on Capitol Hill? Shouldn’t Wall Street have fallen out of bed now that gridlock is over?

There are several reasons for optimism. First, the Georgia election ended the political uncertainty, and the market hates uncertainty.

Second, more stimulus spending, including the $2,000 checks, are likely to continue. A better solution would be to end all lockdowns and let individuals, businesses, institutions and schools decide for themselves how to handle the pandemic and stay healthy.

Third, gridlock is still alive. The Democrats hold a slim margin in the House and are tied in the Senate. That means that it will be very difficult for Democrats to adopt a radical agenda – pushing through the Green New Deal, Medicare for All, raising taxes, eliminating tax breaks for investors, raising the minimum wage to $15 an hour, packing the Supreme Court, or adding four new senators (two each in Washington, D.C., and in Puerto Rico).

Conservative Democrats such as West Virginia Senator Joe Manchin has already said he will oppose any effort to eliminate the filibuster. Who knows, he may get so fed up with the Democrats that he could switch parties and, presto, the Republicans are back in power in the Senate! Either way, Sen. Manchin will become increasingly important to both sides with the Senate split 50-50 between Democrats and Republicans, with Kamala Harris becoming the tiebreaking vote as the new vice president when she takes office.

Still, I expect a series of anti-growth measures to work their way through Congress, including more wasteful stimulus or pork barrel programs, and Biden and the Democrats in charge of appointing federal judges and department secretaries.

Moreover, President Joe Biden (like Trump before him) will now hold the power to issue executive orders, and who knows what will-o-the-wisp mischief he will create by the stoke of a pen, especially during another health care or financial crises. More and more, it seems that everything is either prohibited or mandated. Our freedoms are being squeezed.

That’s why we are getting a huge response to this year’s FreedomFest on July 21-24, which has been moved from Las Vegas, Nevada, to Rapid City, South Dakota, near Mount Rushmore. We are now approaching 900 attendees and growing fast. (The super early bird special is still available at $299 per person but will end on Sunday. Then the rate goes up to $399. To register, go to www.freedomfest.com.)

In short, not all is lost, and we have not reached the point of no return… yet!

So, I remain fully invested in the stock market, with a focus on technology, including cryptocurrencies, as well as precious metals, and individual stock plays. I also see that cannabis stocks have suddenly come alive again.

Good news! My new 10th-anniversary edition of “The Maxims of Wall Street” has suddenly become a bestseller on Amazon, which just ordered nearly 500 copies.

We sold more than 1,000 copies during the holiday season, and I’m still getting orders. One subscriber ordered a copy last month and has come back twice with new orders for friends and clients.

You can buy the new edition from Amazon, but if you want your book autographed and numbered, you need to order directly from me at www.skousenbooks.com. The price is only $20 for the first copy, and $10 for all additional copies. If you order an entire book of 32 copies, you pay only $300. And I pay the postage for all orders if mailed in the United States. 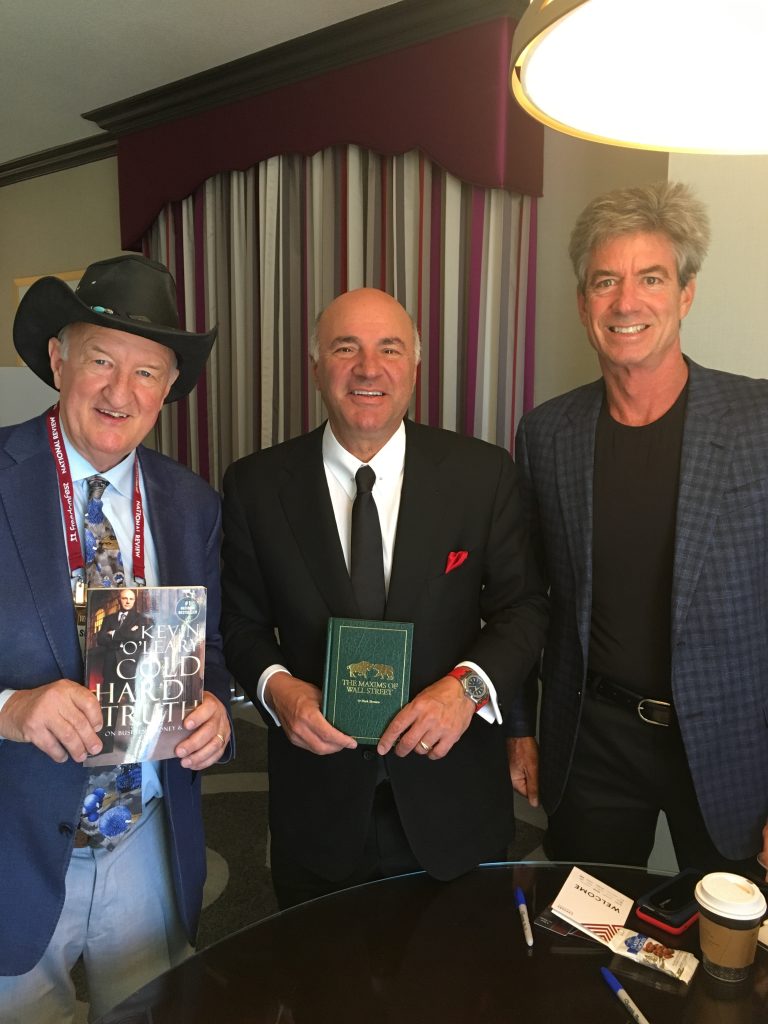 The new edition of “Maxims” is a keepsake — a classic that will be the source of wit and wisdom for years to come. Many subscribers keep it on an office desk or nightstand and refer to it often.

As Kevin O’Leary, “Mr. Wonderful” on Shark Tank (see photo), says, “I love your book. Thanks for quoting me!”

Alex Green calls the Maxims “a crash course in financial freedom.” He wrote: “A college economics professor, founder of FreedomFest and bestselling author, Mark has spent more than four decades reading, writing, teaching and lecturing about financial markets. Along the way, he has collected a treasure trove of proverbs, slogans, stories and juicy quotes. Skousen provides plenty of stories and commentary to go with these gems and hundreds of others. I found myself chuckling (and occasionally sighing) when I first read this book. And I still refer to it regularly.”

California Democrats Seek to Transform Our Culture for the Worse

Between Nancy Pelosi as Speaker of the House and Kamala Harris as Vice President, California radicals are taking over Washington, and changing our culture — and not for the better.

I was shocked to learn that on Jan. 1, 2021, Speaker Pelosi and House Rules Committee Chairman James McGovern imposed House Resolution 8, which includes, among other things:

Replacing certain gender-specific terms, in the text of the rules, with gender-neutral alternatives, including:

The new gender-neutral rules would not impose these rules on House members in making speeches or drafting resolutions, but I think it won’t be long before it will.

Prepare for another cultural war in America.

I wonder whether this new rule will require Speaker Pelosi to rewrite her Twitter bio in which she describes herself as a “mother, grandmother, dark chocolate connoisseur.” That was before she was woke.