Why Stocks Skyrocketed After the Election

Talk about a crazy election night. On Tuesday night, the voting swung from Biden to Trump and back to Biden. We witnessed the fleeting thrill of victory… and the agony of defeat.

The election betting odds saw those who bet on Trump suddenly make millions, and then hours later, they were wiped out

The polls, once again, were proven wrong — the vote was much closer than the “Blue Landslide” they expected. The establishment pollsters have been discredited.

Many of my friends were adamant that Trump would win this election because of the “shy” voters. The secret ballot elected Trump in 2016 and would do so again.

One friend bought the farm and backed up the wagon in betting that Trump would win.

They were almost right. A few thousand votes in a couple of states could have reelected the president.

In my Forecasts & Strategies hotline on Monday, I predicted a “toss-up” in the presidential election. I also stated, “If Trump wins Florida, it could be a long night, and anything could happen.” He did, and it was. I also thought that despite the presence of “shy” Trump voters, Biden had the upper hand in this presidential cycle.

The outcome of the presidential election could take a while, given some troubling signs of irregularities (voter fraud) in contested states such as Michigan, North Carolina and Pennsylvania. Here come the lawsuits!

But as it now stands, Joe Biden could be declared a winner in the next day or two.

If Joe Biden does prevail, the Democrats will say, “The nightmare is over.”

But another nightmare could be around the corner, with the radical Democrats pushing through their socialist agenda — the Green New Deal, free college tuition, socialized medicine, court-packing, adding new senators from D.C. and Puerto Rico and tax hikes on investors and business.

Fortunately, it’s not likely to happen. It appears that the Republicans have managed to hold on to the Senate majority, which means another two-to-four years of gridlock. This means the radical socialist agenda is not likely to go through.

Let’s hope for that. But the danger remains.

There’s still a lot of uncertainty about yesterday’s national elections and their impact on your portfolio.

Why the Stock Market Soared This Week

And yet the stock market skyrocketed the day before and after the election. Why? Primarily because whether Biden or Trump won the presidency, financial experts knew we were going to get gridlock. And Wall Street loves gridlock because it means a dependable tax and spending policy. The government is unlikely to adopt any crazy schemes by Democrats or Republicans.

Me? I still like both technology and gold as investments in 2021 and beyond. They should do well no matter who gets elected.

The Few, the Proud, the Brave!

I’ve arranged a private “off-the-record” Post-Election Summit to analyze the election and what it means for investors.

I look forward to seeing a few hundred brave investors and concerned citizens who plan on joining me in person starting tomorrow, Nov. 6-7 at my private “off-the-record” Post-Election Summit in Las Vegas.

A long-time friend and subscriber said that he is driving all the way from Tennessee to come to the Post-Election Summit.

I have invited a dozen political, economic and financial experts to join us for a private meeting in Las Vegas right after the election to give us their perspective and best insider advice. You can see the list of speakers and their topics at https://globalfinancialsummit.co/.

They include our top Eagle financial experts Jim Woods, Hilary Kramer and Bryan Perry…. plus Adrian Day on investing in gold and mining stocks.

I’m especially looking forward to John Fund, senior editor at National Review, who will give us an “off-the-record” report on the election, potential voting fraud in the key battleground states, and the Hunter Biden/Joe Biden scandal. Plus, he will give a hard-hitting critique of political polling. His talk alone will be worth the price.

Some of the questions we’ll tackle at the Post-Election Summit:

Fly there, drive there, bike there, be there!

The Two Best Books to Counter the Big Government Democrats in Power!

For those of you who can’t make it, I suggest you subscribe to my newsletter, Forecasts & Strategies, where I will summarize the conclusions of our Post-Election Summit. To subscribe, go to www.markskousen.com.

In addition, I recommend you invest some time reading and digesting two good books in sound economics.

How do you get rid of a bad idea (socialism and big government interventionism)?

With a better idea! 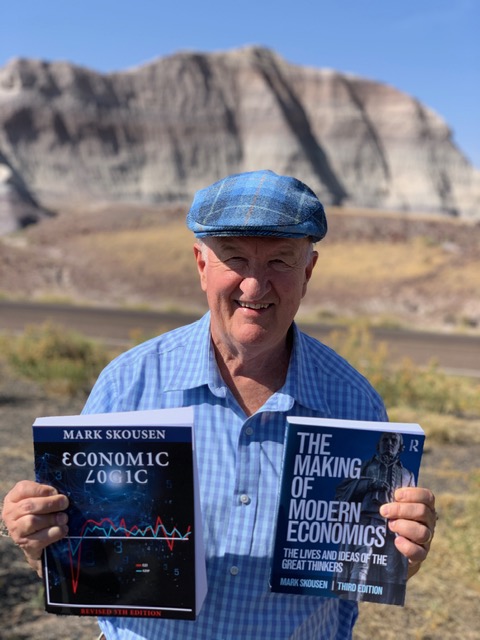 That’s why I spent years writing and updating my two best books on sound economics: “Economic Logic,” my book that teaches students and adults about free-market capitalism in 28 easy lessons.

Here’s what Steve Forbes says about my book:

“His textbook, Economic Logic, now in its 5th edition, demonstrates his ability to look at the whole economy, that is, the real world and real people. The rigidity between micro- and macro-economics is not for him. He realizes instead that they’re all connected together. He begins this book with a profit-loss income statement to demonstrate the dynamics of the real-world economy. No other textbook does this.

“Skousen’s book brings in many other disciplines to teach lessons of economics, whether it is history, sociology, finance or marketing management. He recognizes that individual departments may be a convenient way for universities to organize their academic activities, but in the real world, it does not advance learning. They need to be integrated. In that sense, he is the spiritual heir of Adam Smith, harking back to a time before mathematicians took over economics.”

Forbes is also a big fan of my history of the great economic thinkers, “The Making of Modern Economics,” now in its third edition and published by Routledge. It won the Choice Award for Academic Excellence.

“The Making of Modern Economics”

“Mark is unique in his fascination with history. Read his concise and incisive sketches of numerous economists in ‘The Making of Modem Economics,’ now in its third edition and published by Routledge. He brings history to life. People are interested in people. He understands that such stories are highly instructive.

“Skousen has done many other things. He has written illuminating books on investing. He created FreedomFest. He is a talented thespian. He also married Jo Ann, the best thing he ever did.

“A hundred years from now, we will celebrate Mark’s contributions. Mark is a great economist, great teacher and a great friend.”

What Others Are Saying

Greg Feirman, manager of Top Gun Financial writes: “Skousen is a brilliant and prolific economist as well as writer of a popular financial newsletter, Forecasts & Strategies, for decades now. Because of his interest in financial markets, Skousen is an economist obsessed with the real-world applicability of his economic ideas. He has written over 20 books, including Economic Logic, his brilliant introductory textbook to economics, and The Making of Modern Economics, the best history of modern economics around.”

And John Mackey, CEO of Whole Foods Market, writes; “Mark’s book [‘Making of Modern Economics’] is fun to read on every page. I have read it three times. I love this book and have recommended it to dozens of my friends.”

And the late great William F. Buckley, Jr., wrote, “I champion Skousen’s book to everyone. I keep it by my bedside and refer to it often. An absolutely ideal gift for college students.”

To purchase copies of “Economic Logic” or “The Making of Modern Economics” at a 30% discount, go to www.skousenbooks.com. They are only $35 each and are all autographed and postpaid. (For orders outside the United States, add an extra $30 per book.) They also make great gifts to students to inoculate them from the socialist indoctrination in our colleges and universities.

Keynote Speaker at the Asset Protection and Investment Conference in Vegas

I’ve also just been invited to give the keynote address at the Annual Asset Protection and Investment Conference, Nov. 14-18, at the J. W. Marriott Hotel in Las Vegas.

By then, hopefully, the dust will have settled on the elections. This is a high net worth conference limited to no more than 50 accredited investors who are keen on finding ways to protect and grow their assets.

My keynote dinner speech (Monday evening, Nov. 16) will be “The Post-Election Verdict: Are We Headed for Another Roaring Twenties or a Great Depression?”

Good News Out of California

Everybody complains about California. “Why did you move there?” friends ask with a perplexed look on their faces.

Honestly, we moved to California to have a home near Chapman University, where we teach. We love the nice weather, the friendly people and the diverse amenities.

We sold our home in New York. Since the pandemic lockdown, it’s hard to find anything fun to do in the Big Apple anymore. Broadway, Lincoln Center, the clubs, the restaurants, the museums — practically everything is shut down.

In this week’s election, there was some news out of California. Voters overwhelmingly rejected a return to affirmative action in government decision-making. Uber and Lyft won a ballot measure to keep paying its drivers as independent contractors rather than employees. And a ballot initiative to eliminate the requirement that arrested criminals post bail pending their court appearance is losing handily.

In Virginia, voters vowed to end partisan gerrymandering by approving a referendum that will put redistricting in the hands of a bipartisan commission next year. Every state should do this.

We also have a home in Florida, our official residence. What did they vote for? A constitutional amendment raising the minimum wage passed by 61%. In the future, companies doing business in Florida will have to pay their workers a minimum of $10 an hour, which will increase a dollar each year until 2025, when it will reach $15 an hour — and then the minimum wage will be indexed to the consumer price index.

This will be a disaster for small businesses, such as restaurants and shops, that depend on unskilled labor. Will citizens ever learn that government intervention always has unintended consequences? If only they took one of my classes in sound economics!

Chapter 10 on wages and work in my textbook, “Economic Logic,” offers the best, most convincing argument against minimum wage legislation. Why? Because it shows, in graphic form, why a minimum wage is bad for society and then shows “natural” ways to raise wages without government interference.

You can’t win an argument against a bad law unless you show students or voters a better way. That’s what I do. Students who take my economics class change their minds every time.

For more information on my book “Economic Logic,” go to http://mskousen.com/economics-books/economic-logic/.

To order “Economic Logic,” go to www.skousenbooks.com. They are only $35 per copy. I sign each book and mail it at no extra charge.