Who Killed the Bull Market?

At 1:00 p.m. that day, I’ll begin filming an important new investment video — and I want YOU to be part of our small, live audience. As a “thank you” for attending, I’ll personally hand you a signed hardcover copy of my book, Maxims of Wall Street. Additionally, I’ll conduct a short Questions & Answers session immediately following the taping.

Please note: Seating is limited in the studio, so I encourage you to sign up now if you’re interested in attending. Click here for all the details and to confirm your seat. I look forward to seeing you in downtown Washington, D.C., on May 29!

“A forecast is never so useful as when it warns man of a crisis.” — Bertrand de Jouvenal

The 10-year-old “mother of all bull markets” is struggling. Is this the end of the good times on Wall Street?

At the Las Vegas MoneyShow, I debated Peter Schiff, the perennial bear, on the economy. He argued that that the high debt load and artificially low interest rates had created a bubble that will inevitably collapse at any given time.

Since the Dow Jones Industrial Average has yet to reach another all-time high in 2019, he has predicted that we are entering a bear market now.

On the other hand, I pointed out that U.S. corporations are in solid financial shape after the financial crisis of 2008 and that they have cut costs to the bone in order to build a large cash position. Corporate profits are near record highs. And the economy is booming without much inflation.

Still, there is trouble on the horizon. Corporate debt is not a problem, but government debt is. It is now is approaching $22 trillion, with no end in sight. Whatever happened to President Donald Trump’s campaign promise to cut the national debt?

When interest rates rise sharply, watch out. We could be headed for trouble.

What Could Cause the Market to Turn South? Beware of the Fed!

In my breakout session, I said the stock market is relatively high and could suffer a bear market at any time, given its run-up is now over 10 years old.

What could kill it? I named three potential causes:

Since the end of World War II, the main cause of bear markets has been inflation — followed by tight-money policies, such as in 2000 and 2008, when the Fed raised short-term interest rates and caused an inverted yield curve (where short-term rates exceed long-term rates).

Steve Hanke, Professor of Economics at the Johns Hopkins University, argues that the Fed has switched from easy money to tight money. He noted that the broad-based money supply is slowing down in both the United States and China, which could end the bull market.

Another possible killer is the prolonged U.S.-China trade war. It not only could end the bull market in America, but elsewhere around the world as well.

Global trade has increased dramatically since World War II. In the United States, trade (exports + imports) now exceeds 25% of gross domestic product (GDP). Globalization is a major reason for an increase in our standard of living. However, protectionism and an America First policy could kill it. So could an economic war between China and the United States.

We can only hope that President Trump will succeed in reaching a trade agreement with China soon. It is starting to look like this trade war will not end quickly.

Finally, a geopolitical or global military incident could trigger a collapse in stocks. Such an event last occurred in 2001 with the 9/11 terrorist attacks. Wall Street went into a bear market that lasted until 2003.

President Trump is enamored with a bull market and does not want it to end. Let’s hope he pursues policies to keep it going.

New 6th Edition of ‘Maxims of Wall Street’ Is a Hit!

The two quotes at the top of this article come from the latest edition of “The Maxims of Wall Street,” my bestselling collection of all the sayings, proverbs and wisdom of finance.

The new sixth edition is hot off the press, and I sold nearly five boxes at the Las Vegas MoneyShow. It was the most popular book there. Attendees fought to get copies at our Eagle booth!

John Buckingham, the respected editor of the Prudent Speculator, told me at the Las Vegas conference, “It’s the best gift I received all last year — seriously! I quote from it all the time.” 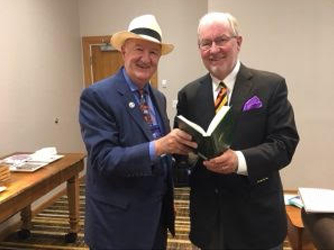 Dennis Gartman, editor of the Gartman Letter, said it best: “It’s amazing the depth of wisdom one can find in just one or two lines from your wonderful book. I keep it on my desk and refer to it for daily wisdom.”

Over 27,000 copies are now in print. It has been endorsed by Warren Buffett, Jack Bogle, Alex Green and Bert Dohmen.

Here’s a few of the additions in the new 6th edition:

“The light on Wall Street can at any time go from green to red without pausing at yellow.” — Warren Buffett

And vice versa. So true in the past week!

“In investing it’s better to be scared than sorry.” — Seth Klarman

On page 51, “It’s better to make a little money than to lose a lot of money.” — Robert Brady

“If Santa Claus fails to call, bears may come to Broad and Hall.” — Yale Hirsch

“When the pundits say gold is dead, it’s time to look for a resurrection.” — Richard Band

And on a more somber note:

“We squander health in search of wealth,

We scheme and toil and save,

Then squander wealth in search of health,

And find at last a grave.”

Sad but too often true!

Hopefully I’ve whetted your appetite to buy a copy for yourself — and a bunch for your friends, relatives, brokers and clients. It makes the ideal gift.

Although my costs have gone up for the 6th edition, I have decided to keep the price the same: $20 for the first copy, and $10 for all additional copies. And if you buy a box (32 copies), the price is only $300 — less than $10 each. I autograph each book and mail them for free within the United States.

To order online, go to www.skousenbooks.com. Or call Harold at Ensign Publishing at 1-866-254-2057. (For orders outside the United States, call Harold for a quote.)

People tell me the book has made them a better investor. Amen!

Why Socialists Are Winning the Hearts and Minds of the Youth

On May Day (Socialist Workers’ Day), I received two books in the mail. Both books were written by “Christians,” but they were very different. Which do you think I should read first? 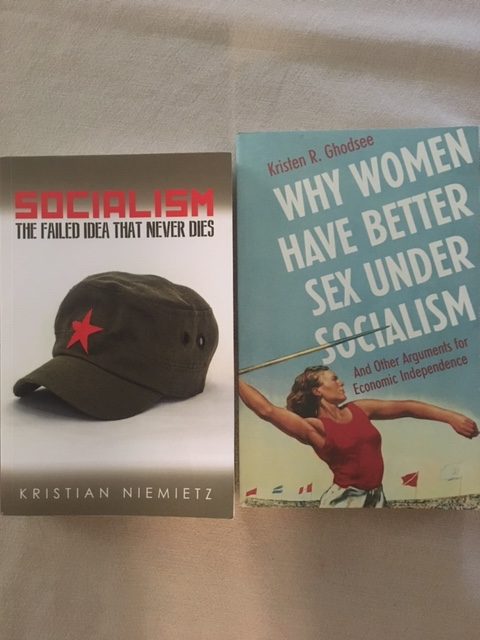 The first one is written by Kristian Niemietz, chief economist at the Institute for Economic Affairs in London (a free-market think tank), called “Socialism: The Failed Idea that Never Dies.” It is a big book of 372 pages that goes into detail of the failures of Socialist states from the Soviet Union to Venezuela.

The second one is written by Kristen R. Glodsee, a sociology professor at the University of Pennsylvania who has spent years in Russia and Eastern Europe. Her book is called “Why Women Have Better Sex Under Socialism, And Other Arguments for Economic Independence.” Her book is 207 pages and has photos of heroic women behind the Iron Curtain.

Professor Glodsee is serious about the title. She also highlights the fact that women were given equal status with men in the former Socialist countries and that this supposedly improved their sex lives and self-esteem.

She complains that, under the new “neo-liberal unfettered capitalist model” in today’s Eastern Europe and Russia, women are so harried and overworked that they can’t have a decent romantic relationship.

It is an important debate — and one that we are going to address head-on at this year’s FreedomFest.

New Debate: “State Socialism vs. Democratic Capitalism: Which Model is Better?” I’m happy to announce that John Mackey, CEO of Whole Foods Market, and author of “Conscious Capitalism,” will debate Barry Eidlin, a sociology professor at McGill University in Canada, and a self-styled radical Marxist socialist who has had extensive experience defending labor unions in the United States and France, at this year’s FreedomFest. Professor Eidlin can fluently quote Marx in English and French!