What Happens If Your Favorite Guru Loses His Magic Touch?

“There’s no such thing as the goose that lays the golden egg forever.” — Jim Simons, Renaissance Technologies Fund

I’ve written recently about legendary money managers who used to beat the market for years, but then suddenly lost their magic touch.

For example, I reproduced a chart in my September 26, 2019, issue of Skousen CAFÉ to show how Warren Buffett is now underperforming the market indexes. Even he admits it. Click here to read the details.

In the 1990s, Bill Miller, manager of the Legg Mason Capital Management Value Trust Fund, had the hot hand. His fund beat the S&P 500 Index 15 years a row from 1991 to 2005, but then the fund cratered during the 2008 financial crisis. He left to start his own company.

Last week, I attended the Mont Pelerin Society meetings at the Hoover Institution at Stanford University.

While there I spent some time with Ron Muhlenkamp, the legendary money manager of the Muhlenkamp Fund. He’s a strong supporter of free enterprise.

For decades, his fund beat the market. He even engineered his fund to make money in the treacherous bear market of 2000-2003. He gave me a copy of his investment book, “Harvesting Profits on Wall Street,” published in 2006, at the pinnacle of his success.

But then Muhlenkamp’s magic touch ended abruptly, and his fund has really struggled since 2006, up an average 2% a year. Morningstar rates it only one star! I see that his fund’s two biggest positions currently are Microsoft and Apple, two of the best performing stocks in 2019, and yet the fund rose only 15% last year.

It reminds me of Alex Green’s clever saying, “Funds don’t have track records, but fund managers do.” (We’ll add this quote to the new 7th edition of “Maxims of Wall Street,” due to be released next week.)

Fortunately, our favorite money manager, Ron Baron, is still going strong. I’m betting he will continue to do well, but as Yogi Berra famously said, “Never make predictions, especially about the future.”

At the Mont Pelerin Society meetings, I met up with several Latin American experts, who told me that the famed Chilean Model of free-market capitalism is now on the ropes, just when Latin America desperately needs an alternative to the failed states of Venezuela and Argentina. 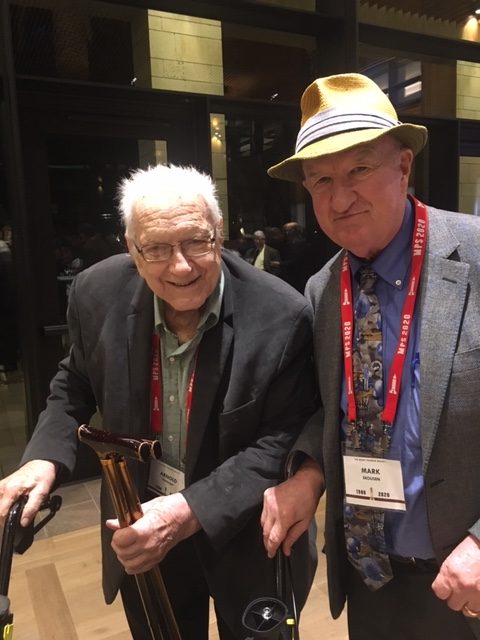 Here is a picture of me with Professor Arnold Harberger, who, along with the late Milton Friedman, guided the turnaround in Chile by the “Chicago Boys.” Harberger is now 95 years old, and sadly his influence is waning. Chile is planning a new constitution soon, and that can’t bode well for the Chilean Model.

The Chilean stock market used to be a big winner, but like the top investors mentioned above, suddenly lost its glitter and has done so poorly in the past 10 years that it is now been incorporated into the Aberdeen Emerging Markets Income Fund — a fund that is down sharply from its high of 2010.

I know a lot of my investment friends think emerging markets are due for a rebound, but this sector is too volatile for my tastes. There are better opportunities elsewhere, although I may buy some foreign stocks in my trading services.

How Long Will This Bull Market Last?

Many of my subscribers are worried that Wall Street also will succumb finally to a bear market. I’m convinced that the most recent crisis of 2008 won’t be the last.

We are still fully invested in Forecasts & Strategies but have guarded optimism. At the Mont Pelerin Society meetings, I met up with a member of the Council of Economic Advisors (CEA) in the Trump Administration and complained to him about the excess spending by Congress and the current administration.

I asked him if he was worried about the rising deficits, now over $1 trillion during a time of full employment — something no sound economist favors. (We should be running healthy surpluses and creating a “rainy day fund.”)

“Yes,” he said, “We are worried, but budget cuts are difficult when most of the budget is linked to entitlements.”

Really? But that was true during the Clinton years, which ended in surplus.

There really is no excuse for the “spend, spend, spend” policies of this government. That’s one area where the Democrats and Republicans agree — an activist fiscal policy. Capitol Hill should be worried about out-of-control spending, not the impeachment of a president.

There will be a day of reckoning, and my goal is to warn investors in advance to protect their profits.

We already have sold a dozen cabins, but I was just informed by the Crystal cruise line that the rest of the ship is sold out, with a waiting list.

The good news is we still are holding 24 cabins for our group. But we must fill these cabins by March 1, or we will need to give them away. So, if you want to join us for this incredible journey from Athens to Rome, now is the time to act!

As we sail, we’ll discuss the global economy, investment opportunities and strategies to build wealth and produce safe, steady income… plus, learn the lessons of history in the ancient world of Greece and Rome from John Prevas, one of the world’s foremost historians, who will speak about his book, “Power, Ambition, Glory: The Stunning Parallels between Great Leaders of the Ancient World and Today,” co-authored with Steve Forbes.

I will be speaking on “Applying Aristotle’s Golden Mean to Your Investment Strategy,” and my wife Jo Ann will give her famous talk on the “Greek and Roman Myths” as well as “Oh, Say, What is Justice? A Survey of the Ancient Philosophers.” Last, but not least, Jeff Verdon, one of the country’s foremost tax and estate planning experts, will discuss “Secrets of the Uber Rich for the Rest of Us.” Not to be missed!

Join us for this intimate cruise to the cradle of Western civilization. Please visit our website for all the details on the itinerary, packages, experiences and more. Or call 1-844-225-5838. We look forward to having you join us and a small group of friends on this unforgettable journey!

2020 is the perfect time to plan to join me and my wife for the next luxury “Gods and Empires” cruise, Sept. 20-27, aboard the five-star Crystal Symphony through some of the most historic areas in the world, from Athens to Rome.

Is War Good for the Economy?

“War is the health of the state.” — Randolph Bourne

“There never was a good war, or a bad peace.” — Benjamin Franklin

Yesterday, in my daily “Eurekanomics” class quiz at Chapman University, most of my students answered “true” to the statement, “war is good for the economy.”

I responded that only Americans think war is good for the economy, because World War II got us out of the Great Depression by employing 10 million idle workers and stimulating the production of airplanes, tanks, guns and weapons of mass destruction.

Moreover, the mainland of the United States was not bombed like Europe or Japan, which were devastated by the war.

Even today, many politicians think war is good for the economy. Look at the performance of war stocks, euphemistically called “defense” stocks. They have outperformed the market for years. I’ve recommended a defense stock fund or exchange-traded fund (ETF) for years and we’ve made a lot of money. I’ll be speaking on this subject for the first time at the Orlando MoneyShow in a couple of weeks (Feb 6-8): “The Best Offense is a Good Defense — How to Beat the Market with My Five Favorite ‘War’ Stocks.” See you there! To sign up, click here or call 1-800-970-4355 and mention my priority code of 049278.

In short, the industrial-military complex is alive and well.

Nevertheless, war is hell, and while it increases spending by government and the private sector, it comes with a heavy cost in blood and treasure.

Yes, we had full employment in World War II, but millions were killed or maimed and had to postpone their education. Cars, food and housing were in short supply.

I explained to my students the importance of “opportunity cost,” what you give up while at war. One wonders what new technologies could have been developed if the funds and ingenuity of American engineers and scientists were spent on non-military research and development.

Benjamin Franklin said it best, “When will men be convinced that even successful wars do at length become misfortunes to those who unjustly commerced them, and who triumphed blindly in their success, not seeing all its consequences? There is so little good gained, and so much mischief done generally by wars that I wish the imprudence of undertaking them was more evident to princes. For in my opinion there never was a good war, or a bad peace. What vast additions to the conveniences and comforts of living might mankind have acquired if the money spent in wars had been employed in works of public utility! What an extension of agriculture… what rivers rendered navigable… what bridges, aqueducts, new roads, and other public works, edifices and improvements rendering England a complete paradise. But millions were spent in the great war doing mischief and destroying the lives of so many thousands of working people who might have performed useful labor!” (Quoted in “The Completed Autobiography” by Benjamin Franklin, compiled and edited by Mark Skousen — see www.skousenbooks.com).

He rightly concluded, “The system of America should be commerce with all, and war with none.”