Home » Investment News & Information » Posts » Publications » Investor CAFÉ » Investor CAFÉ Newsletters » Wall Street Takes a Dive: Is It Time to Get Out of the Stock Market?

Wall Street Takes a Dive: Is It Time to Get Out of the Stock Market?

“How many insecurities traded today on Wall Street?” — Franz Pick

“Everything will end badly.” — Bill Henry

“October is one of the peculiarly dangerous months to speculate in stocks. The others are July, January, September, April, November, May, March, June, December, August, and February.” — Mark Twain

The stock market has fallen sharply this week due to fears of a global recession, the never-ending trade war with China and new calls for impeaching the President.

Is it time to sell? The above quotes, taken from my book, “The Maxims of Wall Street,” reflect the mood of investors these days.

But you would be wise not to panic. Interest rates, inflation and unemployment rates are near all-time lows. The market could turn on a dime if China signs a trade deal or the Fed stimulates the money markets.

Here are some appropriate quotes to suggest a calmer approach

“Everyone is a disciplined, long-term investor until the market goes down.” — Steve Forbes

“Owners of sound securities should never panic. Businessmen can profit handsomely if they will disregard the pessimistic auguries and self-appointed prophets of doom.” — J. Paul Getty

At the Philadelphia MoneyShow last week, I made my appearance as Ben Franklin (see photo below), who warned us more than 200 years ago to beware of doom and gloomers, who he referred to as “croakers.” Back in his day, he noted that, “I saw in the public papers frequent complaints of hard times, deadness of trade, and the scarcity of money.” He paid them no attention and prospered.

Dr. Franklin told the story of an elderly man with a wise look and very grave manner who stopped by his print shop. The visitor sought to warn Franklin that Philadelphia was a “sinking hole” and that he should sell everything at once. For years, the old croaker refused to buy a house because “all was going to destruction.” Franklin concluded the story by saying, “At last I had the pleasure of seeing him give five times as much for a house as he might have bought it for when he first began his croaking.”

Franklin was a natural optimist. One year, while ambassador to France, he wrote a friend, “We had a terrible winter in France… Yet I was still alive, the sun started to return, the days to lengthen, the spring to come, the trees and gardens to regain their vendure, all nature to laugh, and to me, happiness.”

Who are the croakers today? The permabears and gold bugs on Wall Street who are constantly warning us of a stock market crash and the global warming alarmists who are predicting the imminent collapse of our ecosystem and Florida going underwater.

I wouldn’t be surprised to see them buy ocean-front properties with all their book royalties and speaking fees! (Wait a minute! Former President Barack Obama and his wife just purchased a $15 million beach-front property in Martha’s Vineyard in addition to their beachfront property in Kailua Bay, Hawaii.)

It turns out that Dr. Franklin is a big fan of my newsletter and the book “Maxims of Wall Street.” 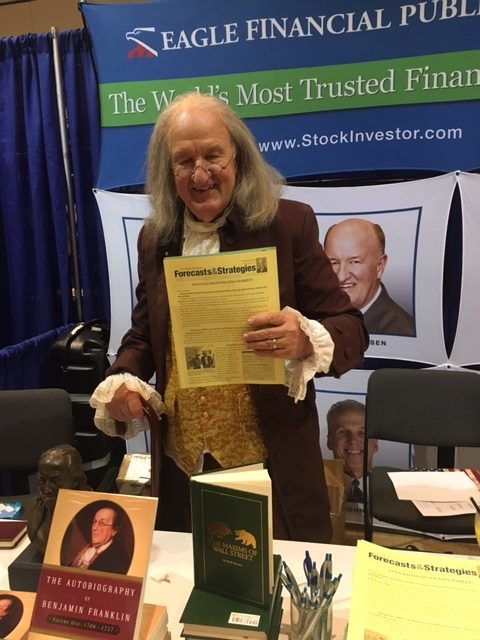 It turns out that Dr. Franklin is quoted 17 times in the new 6th ed. of “The Maxims of Wall Street,” such as:

“Nothing but money is sweeter than honey.”

“There are three friends in life — a faithful wife, an old dog, and ready money!”

“Necessity never made a good bargain.”

“Bad news travels faster than good news.” (So true in the stock market!)

“Genius without education is live silver in the mine.”

“An investment in knowledge pays the best interest.”

“A fool and his money are soon parted.”

And for those who, like us, look for insider trading opportunities:

“Three can keep a secret — if two are dead!”

There are over 800 great quotations and short stories in “The Maxims of Wall Street,” all divided into categories, such as value vs. growth, contrary investing, brokers and advisers, financial privacy, gold & mining and income investing.

Warren Buffett is a big fan: “I love your book and plan to steal some of its lines.” (He’s quoted more than anyone else.)

It is the one and only compendium of financial adages, ancient proverbs and worldly wisdom — it has sold over 28,000 copies. Alex Green calls it a “classic.”

Kevin O’Leary of “Shark Tank” fame is also a big fan of the Maxims. Looking at my book (see photo), he suggested adding this quote: “Getting rich is easy if you follow three rules: spend less, save more, invest the rest.”

The “Maxims” book is available for only $20 for the first copy, and all additional copies are $10 each. And if you order an entire box of 32 books, you pay only $300. As Hetty Green, America’s first female millionaire, said, “When I see a bargain, I buy a lot of it!” Plus, I pay postage and autograph each copy. It is the perfect gift for investors, clients, money managers and stockbrokers.

By the way, here’s something else I shared with attendees at the Philadelphia Money Show last week: The #1 investment in my personal IRA.  If you’re interested in finding out, you can get all the details right here.

Click here to register. Be sure to mention you are a subscriber of mine.

“How dare you!” — Greta Thunberg before the United Nations (to thunderous applause)

The global warming alarmists are everywhere. Al Gore is back with his scare-mongering. Anti-capitalist Naomi Klein has another new book out, “On Fire: The (Burning) Case for a New Green Deal”
and Jeremy Rifkin has written “The New Green Deal: Why the Fossil Fuel Civilization Will Collapse by 2028 and the Bold Economic Plan to Save Life on Earth.”

Even the Economist magazine, which should know better, has drunk the purple kool-aid with its recent “Climate Issue” (the Sept. 21 issue) warning of dramatically higher sea levels. The editors are prescient in saying, “it will be the death knell for economic freedom” and capitalism as we know it.

Ideas have consequences, especially bad ideas. Back in the 1970s, a Chinese official got a hold of Paul Erhlich’s bestseller, “The Population Bomb” and convinced the Chinese government to adopt its disastrous “one child” policy.

The Green New Deal could have similar disastrous consequences in the United States and around the world.

As economist Richard Ebeling states, “Greta Thunberg shouted, ‘how dare you’ to all of those who have not jumped on the climate change hysteria and demanded global central planning to set the planet right. Her temper tantrum does not deal with the reality of the limited impact that supposed ‘global warming’ is said to be threatening the world, and the, in fact, relatively minor consequences if nothing were done, as opposed to regulating material progress out of existence as demanded by the panic mode of ideological zealots.”

To find out the truth about global warming, watch this video.