The Real Cause of Income Inequality Will Surprise You

Hi, Grant Linhares here, the Trading Services Director for Mark Skousen. I just have a quick reminder for you to note that subscribers like you are in good hands with Dr. Skousen — especially in this volatile market. I would also like to remind you that “Winner’s Circle,” a lifetime bundle of all of Mark’s services, is now open. This is a great opportunity to use all of Mark’s services to navigate these markets at a great price. Simply give me a call at 202-677-4492 today, and I’ll give you your personalized quote to join. But hurry, this offer expires at the end of the month!

“Inflation is like trying to catch a tiger by its tail.” — Friedrich Hayek

Adam Smith, the founder of free-market economics, always taught that laissez faire capitalism would actually reduce inequality by dramatically improving the lives of the common man.

He promised that his system of natural liberty would lead to “universal opulence which extends itself to the lowest ranks of the people.”  (See chapter one, “It All Started with Adam,” in “The Making of Modern Economics,” available at www.skousenbooks.com.)

But over the past 30 years the gap between rich and poor has increased. What gives?

The answer is surprising.  The #1 and #2 causes of inequality have to do with two critical events in our history.

The first has to do with a change in the tax law in the early 1990s.

In 1965, CEOs were reasonably paid about 20 times as much as an average worker.

The compensation for company executives gradually rose in the 1970s and 1980s, but there was nothing alarming about the rate of growth. The average income of business leaders, as well as employees, increased with productivity.

But then everything changed in the early 1990s. In the 1992 election, politicians like Bill Clinton complained that top executives were being overpaid. When he beat George H. W. Bush, the Democratic-controlled Congress decided to do something about it.

It enacted section 162(m) of the Internal Revenue Code, which limits what companies could pay their executives. The section caps the corporate deduction for annual compensation to senior managers at $1 million.

The $1 million limit to corporate deductions for executive compensation is still on the books. If a company pays an executive a salary of $3 million, they can only deduct $1 million worth as a legitimate business expense.

The act failed miserably. In fact, it made things worse.

Corporations found a loophole. In the future, CEOs and top executives would be paid $1 million in salary, but then they were given bonuses, especially stock options in their companies, that were not subject to the limitation.

The bull market resumed in 1994, and the Dow and Nasdaq increased dramatically. Now tied to stock prices, CEO compensation soared in the latter half of the 1990s, far more than average wages. In the early 1990s, CEOs were making an average of 60-70 times the average wage-earner. Today, total CEO compensation is 300 times the average pay of a worker.

See the chart below. 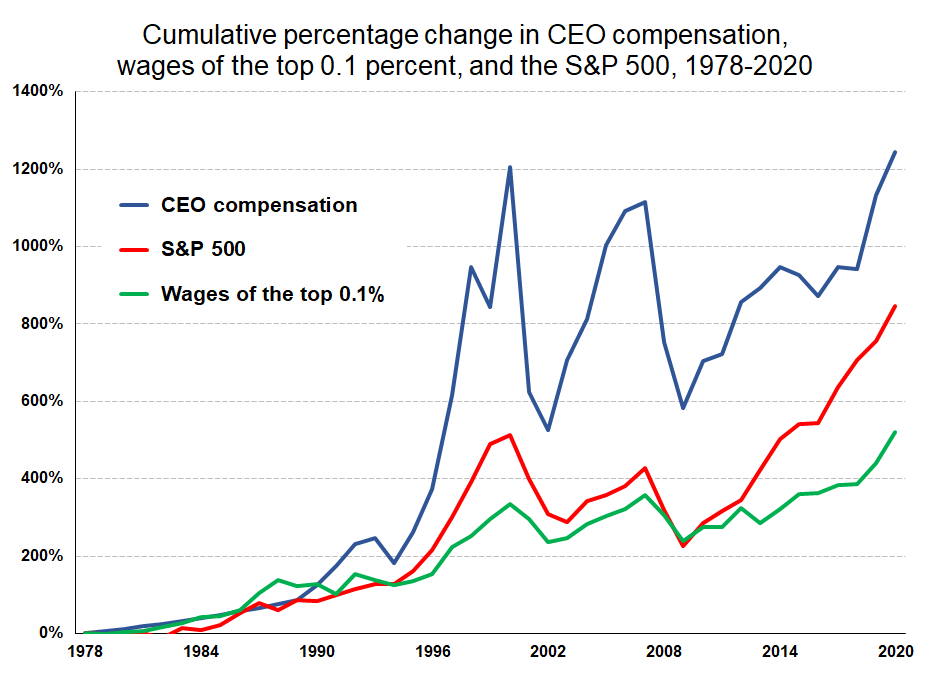 You can see how CEO compensation soared around 1994-95, when the stock option loophole began. It’s been out of control ever since.

How the Federal Reserve Exacerbated Inequality of Wealth

The #2 cause of greater inequality can be laid at the feet of the Federal Reserve. It made inequality worse when it began a policy of “quantitative easing,” the controversial buying of assets directly in the financial markets in response to the financial crisis of 2008.

By aggressively buying Treasury bonds and mortgages, interest rates declined. This propped up the value of corporate bonds and equities.

For years, the Fed adopted both QE (quantitative easing) and a ZIRP (Zero Interest Rate Policy). The result was the “mother of all bull markets,” a market we profited from in Forecasts & Strategies.  My subscribers made a lot of money from the “lords of easy money.”

And who have been the primary beneficiaries of higher stock and bond prices? Wealthy investors!

As Christopher Leonard writes in his fascinating book, “The Lords of Easy Money”:

“ZIRP caused asset prices to rise. This increased demand drove up the price for corporate bonds, stocks, real estate, and even fine art.  The hope was that higher asset prices would create a ‘wealth effect’ that bled out into the broader economy and created new jobs… [But] ZIRP must first and foremost benefit the very richest people in the country.” (p. 119)

And who were the biggest cheerleaders of QE and ZIRP — Ben Bernanke and Janet Yellen!

So, if you want to blame someone for the growing inequality between rich and poor, don’t blame free-market capitalism. Blame the government officials who have been in cahoots with Wall Street bankers — one of which is the current chairman of the Fed, Jay Powell.

Even as the Fed is now grappling with out-of-control inflation, Christopher Leonard ends his book on a sober note:

“When America relied on the Federal Reserve to address its economic problems, it relied on a deeply flawed tool [quantitative easing and interest-rate manipulation]. All the Fed’s money only widened the distance between America’s winners and losers and laid the foundation for more instability. This fragile financial system was wrecked by the pandemic and in response the Fed created yet more new money, amplifying the early distortions.”

We will have several sessions at our Global Financial Summit at FreedomFest next July 13-16 at the Mirage Hotel & Casino to deal directly with the latest boom-bust cycle that the Fed has engineered. Experts include Steve Forbes (who will talk about his new book, “Inflation”), economists Steve Moore and John Fund, money manager David Bahnsen, Jim Woods (co-editor of Fast Money Alert) and legendary investor Jim Rogers.

The full agenda is now online here. Use the code EAGLE to get $50 off the registration fee — it ends on July 1. Now is the time to sign up.

Check Out The Newest Museum In Washington D.C.

“Communism is the greatest satanical threat to peace, prosperity, and the spread of God’s work among men that exists on the face of the earth.” — David O. McKay

There are dozens of Holocaust museums around the world that retell the atrocities by the Nazis against the Jews. It is estimated that over 6 million Jews were killed during World War II.

But the Communists — led by Stalin, Mao, Pol Pot and Hugo Chavez, among others — have killed an estimated 100 million people, and they still control the lives of over 1.5 billion people in China, Cuba, Venezuela and North Korea.

Hans von Spakovsky states, “The only difference between the Holocaust and the gulag is that the Soviet communists never got around to using gas to kill their prisoners — just old-fashioned bullets, beatings, starvation and literally working them to death.”

The communist and Marxist doctrine continues to expand, as evidenced by recent election victories in Chile and Columbia.

To counter this trend, Lee Edwards (of the Heritage Foundation) and other anti-communists are expanding their influence through education and have established the first Victims of Communism Museum in Washington, D.C.

After 30 years in the making, the museum was dedicated last week and is now open to the public. You can learn more about it here.

The museum includes a large section of the Berlin Wall, which long served as a symbol of oppression.

The museum was funded by private individuals and several Eastern European countries, such as Poland and Hungary. Sadly, the American government donated no funds to this museum.

Going to a victims of communism museum, like a Holocaust museum, can be depressing. But we constantly need to be reminded of the depravity of man, “lest we forget” and history repeats itself.

I’m doing my part to fight Marxist/Communist doctrine through my book, “The Making of Modern Economics.”  Chapter seven is entitled, “Marx Madness Plunges Economics into a New Dark Age.”

So, you know where I stand on Karl Marx. That chapter alone has converted many Marxists into free-market champions. To order a copy for only $35, go to www.skousenbooks.com.