The New Bulls and Bears: ‘One Word’ Describes the Post-Election Markets

“The difference between a rich investor and a poor investor is the quality — and timeliness — of his information.” — Bernard Baruch (“The Maxims of Wall Street,” p. 31)

Know the signs of the times. Much has changed since the Nov. 3 elections, and smart investors must adjust their portfolio when the political winds shift.

With Joe Biden headed into the White House on Jan. 20 and Democrats facing an uphill battle in the Senate on Capitol Hill, stocks have surged, and gold has retreated.

The answer can be described in one word: Risk. The fear factor has come down.

Why is Wall Street so ebullient? Not because Joe Biden won. Rather, it’s because the Democrats will be thwarted from pushing their more radical agenda (Green New Deal, soak the rich, free college tuition, higher federal minimum wage, etc.) through Congress.

Biden & Co. will be forced to adopt a more moderate approach. President Trump’s tax cuts and other reforms will remain in place.

In many ways, this is a relief rally.

Consequently, the Dow Jones Industrial Average hit an all-time high, topping 30,000, this week. In my newsletter, Forecasts & Strategies, we are fully invested in technology, financial and health care stocks, all of which will do well in 2021 and beyond.

Why Oil Is Making a Comeback

Crude oil is also surging — up to $45 a barrel this week. Our energy stocks are soaring. How could this be given that Joe Biden and the Democrats want to end dependence on non-renewable oil, gas and coal in favor of alternative energy like solar, wind, water and electric power?

Once again, if the Republicans maintain control of the Senate, the powerful oil interests will be preserved. Republicans have a 75% chance of controlling the Senate, according to www.electionbettingodds.com.

At the same time, alternative energy stocks are moving up sharply.

The most surprising shift is in gold and mining stocks. Gold itself has dropped again below $1,900 an ounce. The gold stock index has declined from 46 to 34.

Profit taking in precious metals is especially unusual because the dollar has declined since the election, which is typically bullish for gold.

There are several reasons. First, the fear-of-the-pandemic trade is off with the coming vaccines.

Second, the fear of overspending trade is off with no stimulus package in site.

And third, consumer price inflation is still MIA — missing in action, despite another round of quantitative easing, cutting interest rates and the massive increase in the money supply by the Fed.

The Consumer Price Index (CPI) rose only 1% in the past year. The Fed has recently raised its inflation target to exceed 2%, but to no avail.

However, I believe the current bear market in gold will be short lived. The profligate policies of governments around the world have not been reversed. Our mining stocks, in particular, are cheap. Given the weakness of the dollar, it’s only a matter of time before the bull market in gold will resume.

The biggest surprise is the steady rise in digital currencies. Bitcoin is approaching its all-time high of $19,800 per unit, reached in late 2017.

Bitcoin is now considered a credible alternative asset to gold. By definition, the digital currency has a limited supply, and given a tremendous surge in institutional demand, the price is inevitably headed higher.

It has recently been backed by PayPal and Square, among other retailers. Bitcoin is the digital gold.

Bitcoin futures also have been approved by the Chicago Board of Trade.

Is this just another speculative mania? Probably not, due to increased interest by institutions. As a JPMorgan analyst stated, there is “a greater urgency by institutional investors to not miss out — to invest some of their assets in bitcoin, because this time looks different.”

Bitcoin Is Also a Technology Play

Investment banks and hedge funds have warmed up to Bitcoin, including Blackrock, Goldman Sachs and JP Morgan. JP Morgan recently launched JPM Coin and Onyx blockchain technology. “We have always believed in the potential of blockchain technology, and we are supportive of cryptocurrencies as long as they are properly controlled and regulated.”

Blockchain is an integral part of the digital currency world, and has great promise in data storage, and has particular application to record keeping in the financial markets, real estate and even politics (eliminating voting fraud).

Famed commodity trader Paul Tutor Jones has put 2% of his portfolio in bitcoin. He called it a “great speculation… I look at it as one tiny part of the portfolio… it may end up being the best performer of all of them.”

It Changes Almost Every Year!

Speaking of volatility and unpredictability…

In his bestselling book, “Capital in the 21st Century,” French economist Thomas Pickety claimed that the super-wealthy earn higher returns than the rest of us, and therefore inevitably control more and more of the world’s wealth.

To reduce this growing inequality, he advocates more progressive taxes and even a wealth tax.

To demonstrate the ups and downs of the super rich, watch this fascinating video of the top 10 wealthiest people in the world over the past 30 years.

A long time ago, Professor Benjamin Rogge (Wabash College) referred to the “creative disruption” of capitalism as “leap frogging.” He was referring to companies that appear to be a monopoly in their specific industry, but eventually are surpassed by competition. There are many examples: Alcoa (NYSE:AA), IBM (NYSE:IBM), General Motors (NYSE:GM), Citigroup Inc. (NYSE:C) and AOL. The latter company was acquired by Verizon Communications Inc. (NYSE:VZ) in May 2015 for $4.4 billion.

The same loss of stature happens to wealthy individuals. Watch the video of the 10 wealthiest people during the past 30 years for real-life examples.

Sam Walton and his family started off as king of the hill in 1990. But after Sam Walton died, the Waltons gradually disappeared from the rankings as their wealth split up one generation after another.

Charles and David Koch also appear at a point, but then disappear when David Koch died recently.

See how long it takes for Jeff Bezos, CEO of Amazon.com, to appear and then rapidly move to #1.

And he may lose his #1 spot next year to Elon Musk, CEO of Tesla.

Probably the steadiest performer is Warren Buffett. I don’t think he ever disappears from this video history. But he’s 90 years old, and when he’s gone, it will be the end of an era.

Know the signs of the time.

Who Wins the Smiling Contest?

Many of the speakers were rather pessimistic about the future under a new Biden administration, raising the specter of runaway inflation, new taxes and more regulations.

Both Mike Cobb and I were an exception. We are still optimistic about America and the markets. There are still plenty of opportunities in the land of entrepreneurs, no matter who resides in the White House. 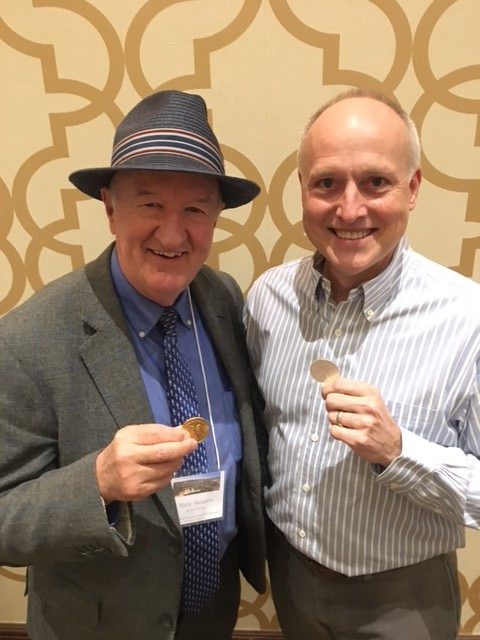 Mark Skousen and Mike Cobb: Why are they smiling?

Question: Use the following link to vote — who has the best smile, Mark Skousen or Mike Cobb? https://docs.google.com/forms/d/e/1FAIpQLSdB-S7A1X8yJgbHkq2XM3Aanu0T_uQUWRFUr6IqeVX5FeIbhg/viewform?usp=sf_link

All of America Is a Promised Land

We are citizens of a great country. Ronald Reagan was right when he said, “In my own mind, I have always thought of America as a place in the divine scheme of things that was set aside as a promised land. It was set here and the price of admission was very simple: the means of selection was very simple as to how this land should be populated. Any place in the world and any person from those places; any person with the courage, with the desire to tear up their roots, to strive for freedom, to attempt and dare to live in a strange and foreign place, to travel halfway across the world was welcome here.”

Mike Cobb firmly believes that the Promised Land includes Central America. He has helped hundreds of Americans invest in and move there.

Mike is the president of ECI Development, a successful real estate development company with projects in Belize, Nicaragua and Panama, including the co-founding of Caye International Bank in Belize.

He and his family live in the United States, but helps people realize the joy and freedom of creating communities overseas in a stable political climate. For more information, go to https://www.mikecobb.biz/.

On this Thanksgiving Day, let us be grateful for all our material and spiritual blessings. As Benjamin Franklin stated, “Our cause is the cause of all mankind. God grant that not only the love of liberty but a thorough knowledge of the rights of man may pervade all nations of the earth so that a philosopher may set his foot anywhere on its surface and say, this is my country!”