The New Bull Market in Gold – What is It Predicting?

“The impact of the rate of inflation on the price of gold is like tracking the footprints of an animal.” — Julian M. Snyder

“You’ve endured the pain, why not enjoy the gain?” — Rick Rule

After two decades of raging inflation, the Federal Reserve under Paul Volcker took on the task of ending this threat to our standard of living.

In 1980, consumer price inflation was raging at double-digit-percentage rates. But Volcker was determined to slay the beast. The Fed tightened the money supply, causing interest rates to skyrocket to 21%, and the economy went into a deep recession.

However, Volcker had the guts to finish the fight and was backed 100% by the new President Ronald Reagan.

It took several years to win the battle against inflation, but by 1982 the consumer price index (CPI) was cut in half, interest rates fell and the economy recovered.

Reaganomics worked, as I had predicted, and we entered a period of disinflation that lasted 40 years. The Fed’s efforts were so successful that at one point interest rates turned negative!

Who would have thought that the bond market would enjoy a 40-year bull market?

But the good news was not to last. In recent years, under Fed Chairs Janet Yellen and Jay Powell, the U.S. central bank reversed course and instituted a policy of inflation targeting and have been so determined to raise inflation to 3% or more that it has gone overboard.

It engaged in another round of quantitative easing, buying trillions of government securities and mortgages.

The money supply rose 26% in 2020. The Fed has kept interest rates artificially low for years, and now its current leaders are getting their wish, good and hard.

Important Warnings from the Austrian Economists

But one thing they forgot. The great Austrian economist Ludwig von Mises warned that “inflation is never neutral” and is inherently unstable. Not everyone gets the money first.

In the Austrian theory of the business cycle, easy money benefits some sectors more than others — specifically benefiting capital-intensive industries such as construction, mining and technology which require a lot of capital at cheap interest rates.

Friedrich Hayek, another great Austrian economist, also warned that inflation is like “a tiger by the tail.” He also said inflation is inherently unstable.

The Biden administration claims it only wants 3% inflation, but it can climb to 6% or 10%. That’s what’s happening.

Once you ignite inflation, it’s hard to control, and can get worse before it gets better.

The fact is that inflation is returning with a vengeance, and it will be hard to stop once it starts.

You can see how serious inflation is becoming since it now accounts for 74% of nominal gross domestic product (GDP). 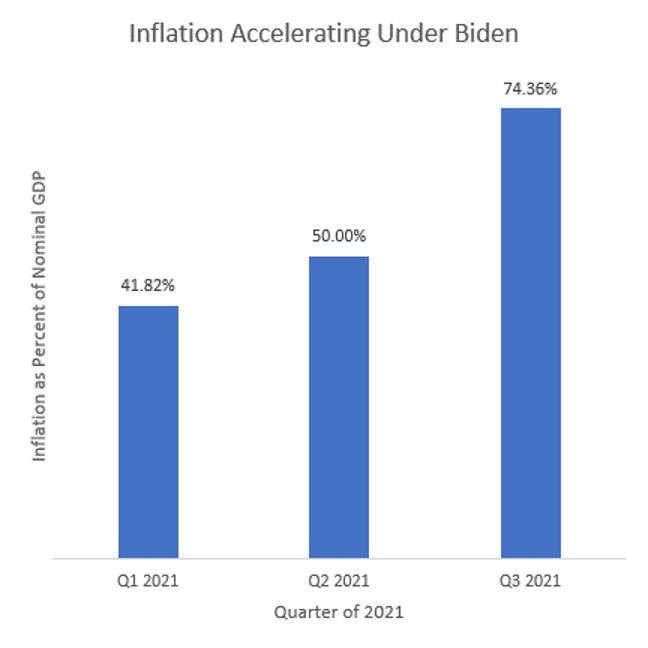 As Steve Moore states, “One way to measure inflation is the difference between nominal and real GDP. Using that metric, inflation has been rising at an alarming pace, accounting for more and more of nominal GDP. Three-quarters of the apparent gains from July through September were just inflation, not real growth, which is why the real GDP figure came in at only 2.0%.

“Meanwhile, the Labor Department reports that wages over the last year after inflation actually LOST 1.2% — meaning workers are poorer in 2021 than they were in 2020.”

The Fed is considering tapering its aggressive buying of Treasuries and mortgages, but will it have the guts to raise interest rates and really fight inflation?

I knew Paul Volcker and I can tell you that Janet Yellen and Jay Powell don’t have Volcker’s guts.

In my own studies, I’ve found that gold is the best forecaster of future inflation, better than interest rates, oil or commodity indexes.

Suddenly gold has come alive and is heading back toward $1,900 an ounce. Silver has taken off, too. I’m recommending both in my newsletter, Forecasts & Strategies.

My favorite mining company is also making a big comeback, rising 50% in the past two months.

That suggests that inflation will get worse before it gets better.

How to Profit from Austrian Economics

I have cited my favorite Austrian economists Mises and Hayek in this Skousen CAFÉ.

I use Austrian economics and its theory of the business cycle to forecast inflation, interest rates and inflation hedges like gold, silver and real estate.

If you want to join me and make money in both bull and bear markets, I urge you to go to www.skousenbooks.com and buy a copy of “A Viennese Waltz Down Wall Street: Austrian Economics for Investors.” It’s a 256-page book that will tell you all you need to know about Austrian economics and finance.

Especially see chapter six on the Austrian theory of the business cycle and inflation, pp. 37-60.

And be sure to check out the photo of my wife, Jo Ann, and me dancing the Viennese Waltz in the front of the book!

The price is only $20 each, and I autograph each copy and mail it right away. It makes an excellent gift book during the holidays.

This week, I returned to Rollins College in Winter Park, Florida, where I taught from 1986 to 2002.

Benjamin Balak, associate professor of Economics, invited me to give a lecture on “Democratic Capitalism,” how customers, workers, suppliers, investors, executives and the community can all benefit from a “conscious” capitalist company. 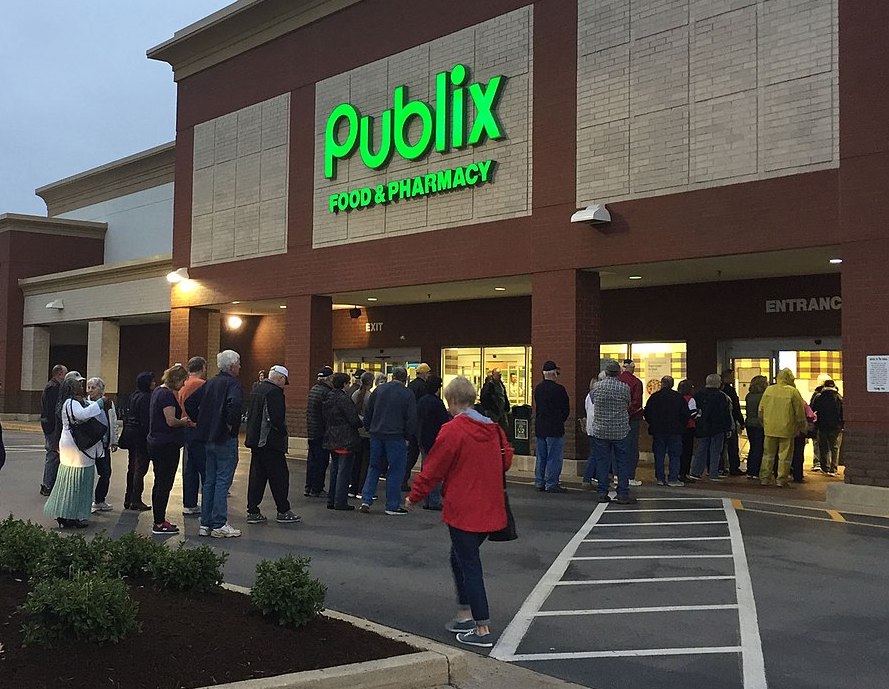 One of the examples I used is Publix Supermarkets, one of the most successful grocery store chains in the United States. It does business in Florida and the Southeastern United States. The grocery chain has more than 200,000 employees.

It also has several distinct features. Publix hires workers with disabilities at its stores to help bag groceries and perform other tasks. Employees are paid weekly and enjoy an annual holiday cash bonus.

It matches 401(k) plans for its employees and offers a generous medical/dental plan and long-term disability pay. It encourages going back to college with tuition reimbursement.

It is one of only a few companies in the country that is owned by employees through its Employee Stock Ownership Plan (ESOP). Publix offers private stock to all full-time employees. It is not a publicly-traded company.

Fortunately, the stock price, set by the company’s executives, has been moving up, from $20 to more than $40 over the past 10 years.

The biggest drawback to ESOPs is that workers depend too heavily on the performance of one stock. Enron had an ESOP and when it declared bankruptcy, thousands of Enron employees went under with the company. Fortunately, Publix offers diversification with its 401(k) plans for employees.