The Fed Disaster Plan — How Bad Can it Get?

Hi, Grant Linhares here, the Trading Services Director for Mark Skousen. I just have a quick reminder that you are in good hands with Dr. Skousen — especially in this volatile market. I would also like to remind you that “Winner’s Circle,” a lifetime bundle of all of Mark’s services, is now open. This is a great opportunity to use all of Mark’s services to navigate and profit in these markets, especially in the new year, at a great price. Simply give me a call at 1-202-677-4492 today, and I’ll give you your personalized quote to join as you get a prorated refund for your current products. But hurry, this offer expires on Dec. 22!

Earlier this year I warned my subscribers about the Biden Disaster Plan — which was to push through massive deficit spending, causing prices to rise to their fastest level in 40 years.

Then, I alerted subscribers to the Trump Disaster Plan — that kept the Republicans from gaining control of the Senate while narrowly eking out a majority in the House when the new Congress convenes Jan. 3.

And now I’m alerting them to the Fed Disaster Plan — raising interest rates in a fast and furious fashion, causing a bear market on Wall Street, a potential recession and perhaps even a monetary crisis in 2023.

Wall Street has a hard time believing Fed Chairman Jay Powell, and that he’s determined to fight inflation and bring it down to the 2% target rate.

Most Wall Streeters want the stock market to go up and are convinced that the Fed will back down. But so far, every time they have been proven wrong, and the stock market tanks after Powell declares that once again, he’s determined to impose tight money until price inflation comes down, a recession hits or a monetary crisis erupts.

Powell and the Fed (along with Biden and the Democrats) caused massive inflation in the first place through their easy money policies during the 2020-21 pandemic.

Now, he’s facing the music and wants to reverse the trend through a tight money policy. We now have a negative yield curve with T-bill rates at 4.3% and 10-year notes at 3.6%. 30-year fixed mortgage rates are now at 7%.

Negative yield curves are a big deal, since almost every recession has been preceded by a tight money policy, as the chart shows below: 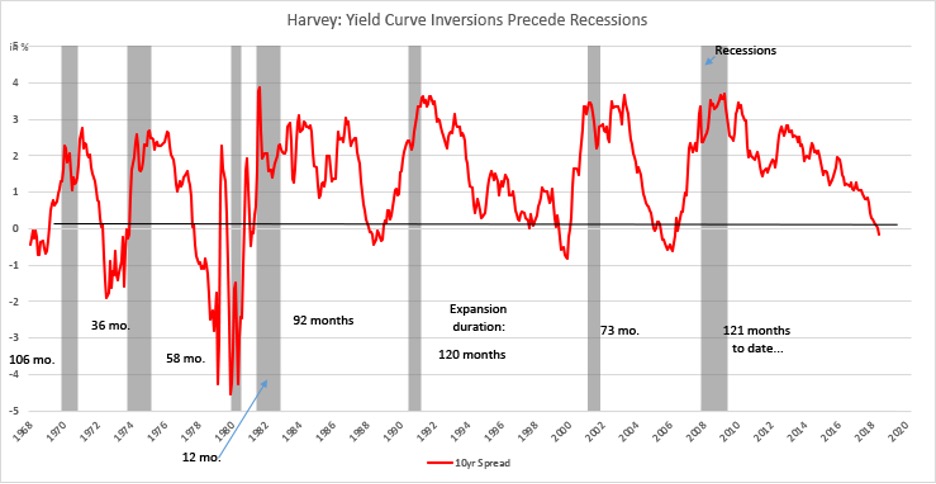 There is a lag, but eventually a negative yield curve causes a recession. According to my gross output (GO) data, we are not in a recession yet, but it could happen in 2023. I’ll have an update on GO on Thursday, Dec. 22.

Tesla and the Bear Market

We’ve been in a bear market for the entire year. Tech stocks, in particular, have been hard hit.

Tesla stock continues to decline and is now down 55% year to date. In early October, I confronted Elon Musk about overvalued Tesla stock (still selling at 70 times earnings) at the Baron Investment Conference. You can watch the confrontation here. It’s gone viral on Facebook.

I raised the question, “Why should I invest in Tesla selling at 70 times earnings when Mercedes Benz, which also makes electric cars, is selling for only six times earnings and pays an 8% dividend?”

Be sure to listen to Elon Musk’s response.

Afterward, I recommended Mercedes Benz stock in my Home Run Trader service. It’s up 15% while Tesla stock has fallen another 25%.

Now we are witnessing the FTX crypto scandal. Headquarterd in the Bahamas, FTX was a cryptocurrency exchange (with over 1 million users) and hedge fund started by Sam Bankman-Fried in 2019. In a matter of years, he became a multi-billionaire who, according to government officials and other investigators, embezzled his clients’ funds and committed voter fraud by funding numerous Democratic candidates during the 2022 election.

According to Bloomberg, his net worth fell from $26 billion to almost nothing within weeks, the worst collapse in history.

Did his Parents Play a Role?

Sam Bankman-Fried came from a blue-blood background: His father is Joseph Bankman and his mother is Barbara Fried, both professors of law at Stanford University Law School. Both were with their son in the Bahamas at the hearings to extradite him to the United States.

Joseph Bankman is an expert in tax law (especially issues related to tax evasion) and psychology. He’s a graduate of Yale and Berkeley.

His wife, Barbara Fried, teaches the Legal Studies Workshop at Stanford, which includes a major section on moral/political theory. She was awarded “excellence in teaching” awards three times. She received all three degrees (BA, MA and JD) from Harvard. His sister Linda Fried teaches public health at Columbia University.

Their son, Sam, graduated from MIT.

So, it has not been a good year for the reputation of Ivy League schools. Or the Democratic Party. Or Bitcoin and cryptocurrencies. Or the Bahamas.

Action to Take: I urge investors to play it conservatively as we enter a new year with a diversified portfolio: high-dividend paying stocks, commodities such as oil and gold, and a cash position to take advantage of bargains. Such an approach will cushion the fall and will set you up to see strong gains when the market recovers.

One More Find in my Garage: A Special Edition of My Financial Privacy Book!

As subscribers know, I cleaned out my garage in my Florida house last month and came across several boxes of first editions of past bestsellers, including “Economics on Trial”, “Economics of a Pure Gold Standard” and “Scrooge Investing”. I sold them to my subscribers, and all of them sold out within a day or two.

One box contained 17 copies of a special 1982 private edition of “Mark Skousen’s Complete Guide to Financial Privacy” — all copies are hardback, come with a book jacket and are shrink wrapped in perfect condition. 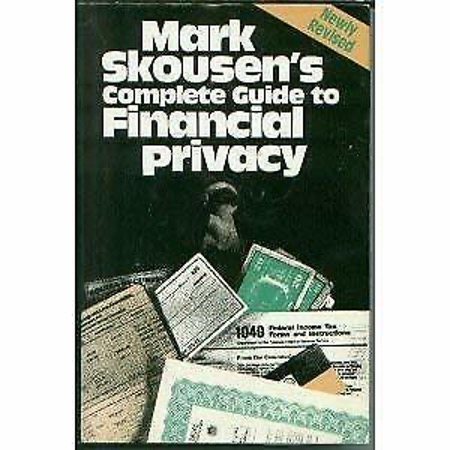 My privacy book, in various editions, sold over half a million copies. It was my #1, national bestseller.

Although some of the advice is out of date, the privacy book raises issues that are even more relevant today. In this computer age, it’s almost impossible to be a “private investor” anymore. Government and big business are constantly monitoring your every move, your finances and even your political views. China is the worst example, but it’s a big problem in the United States and the West as well.

As Supreme Court Justice Louis Brandeis said, “The right most valued by all civilized men is the right to be left alone.” (“Maxims of Wall Street,” p. 95)

Chapters include “What have you got to hide?”…“How to be an international private investor”… “Safekeeping your valuables”… “Privacy and the tax man” and “The private will.”

I’ve decided to sell these 17 copies for $47 each. I’ll autograph and date each one. When they’re gone, they’re gone. To order, go to www.skousenbooks.com.

I have several pages in “The Maxims of Wall Street” on financial privacy and the importance of maintain a low profile.

Christmas is less than two weeks away. If you would like to buy one or more copies of “The Maxims,” order them today. Only $20 for the first copy, and $10 for all additional copies. I sign all books and mail them at no additional charge inside the United States. Order at www.skousenbooks.com.

P.S. I will be holding a subscribers-only teleconference at 2 p.m. EST on Dec. 21 entitled “How To Profit from the Fed’s Disaster Plan.” The event is free for all my subscribers, but you have to register here to be able to attend. Don’t miss out!

But, of course, nothing is free. Taxpayers will foot the bill, amounting to an estimated $42 million a year. The Washington Metropolitan Area Transit Authority currently faces a budget deficit of $185 million.

Mayor Muriel Bowser has also promised repeatedly to end homelessness in the nation’s capital and has already spent $31 million to get people off the streets and another $114 million to improve local shelters.

But I suspect that the free bus fares will only increase the appeal of the homeless to move to Washington D.C..

The Unintended Consequences of Socialism

In my economics classes at Chapman University, I always warn students about the dangers of offering “free” college tuition and “free” medical services or any other valuable commodity or service. It always results in abuse, fraud, overuse of resources, higher taxes and an entitlement mentality.

Take college tuition, for example. When students don’t have to pay for their college education, they often don’t appreciate its value and aren’t as competent when they graduate and take on a new job.

On the other hand, studies have shown that students who pay for their schooling choose their major sooner, get better grades and graduate on time. Economics is all about incentives.

Now I’ll have to add “free” bus fare to my list of bad economic policies.