Steve Forbes is famous for publishing the premier business magazine, Forbes (and Forbes.com); trying his hand at politics (running for president twice); writing great books on economics and becoming the #1 fan of “the world’s largest gathering of free minds,” the FreedomFest conference that takes place in Las Vegas every July. He attends all three-and-a-half days as our official ambassador and typically gives forward-looking presentations multiple times.

Steve’s newest project is the podcast, “What’s Ahead,” in which “he engages the world’s top newsmakers, politicians and pioneers in business and economics in honest conversations meant to challenge traditional conventions.”

We have been friends for years — and have something in common — we were both born in 1947.  (See the accompanying photo.) 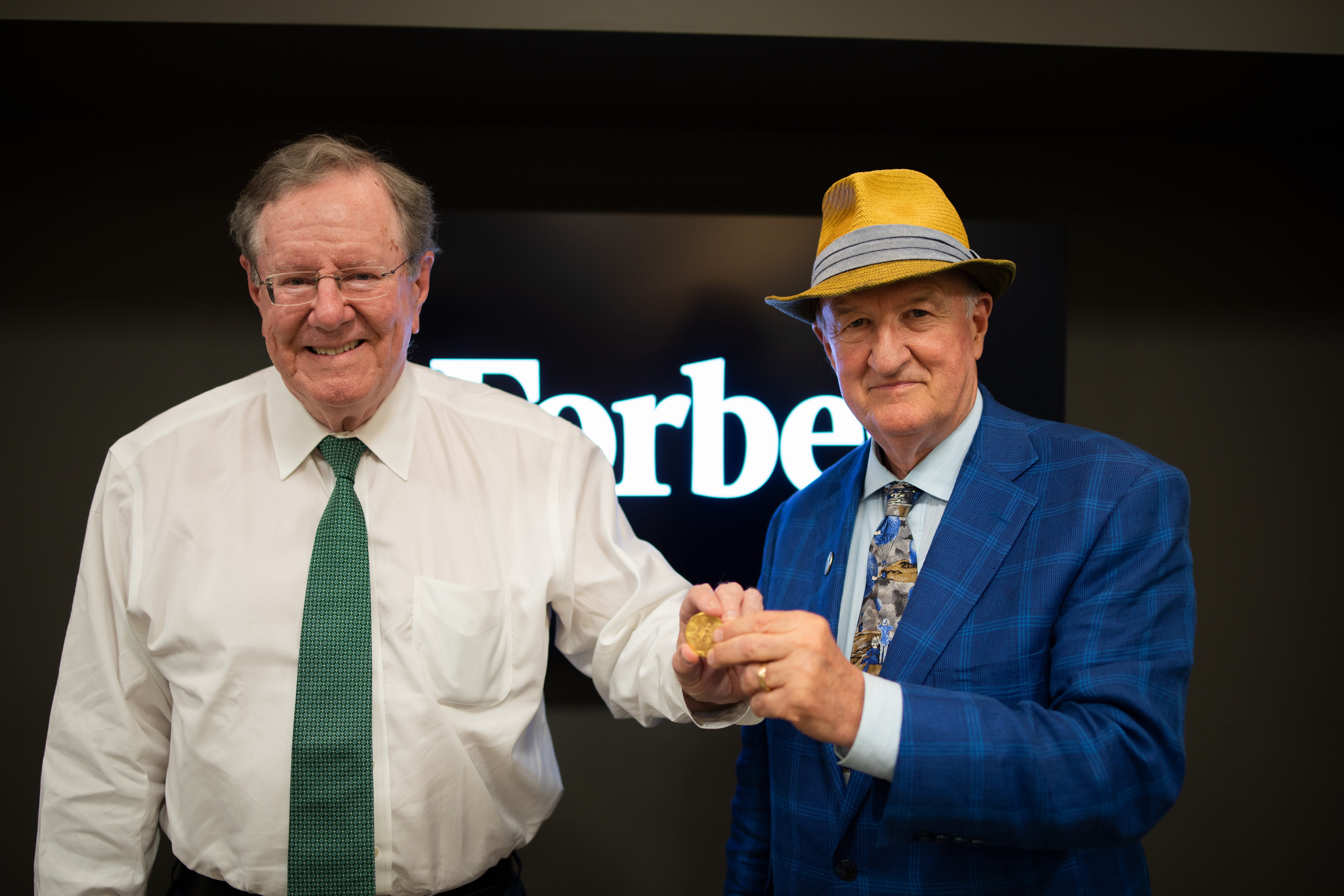 I was privileged to be on his show this week. Past experts have included Howard Schultz (the former CEO of Starbucks), Gov. Mitch Daniels, Maria Bartiromo, George Gilder and Burt Malkiel.

Offering a Better Way to Measure the Economy

During my appearance, I talked about my new revolutionary way to measure the economy — gross output (GO), which the government adopted in 2014.  I call it a triumph in supply-side, Austrian economics.

GO challenges a traditional convention in economics — gross domestic product (GDP). Most people don’t know this, but GDP leaves out all the business-to-business (B2B) parts of the supply chain in the economy! B2B spending reached almost $26 trillion last year in the United States. This was far bigger than the U.S.’s GDP of $20 trillion.

GO is better and more comprehensive because it includes the supply chain. GO measures the “make” economy, GDP accounts for the “use” economy — which accounts for a big difference.

I like the way Steve Forbes compared GO with GDP — “GDP is the X-ray of the economy; GO is the CAT scan.”

Forbes considers GO a “big deal.” He even wrote, “Gross output, long advocated by Mark Skousen, will have a profound and manifestly positive impact on economic policy and politics.”

GO is much more volatile than GDP, so it’s a better way to determine what’s happening in the economy. (For example, during the financial crisis of 2008, nominal GDP – which includes changes in prices due to inflation — fell only 2%, while GO fell more than 6%. GO did a better job of describing how bad things got in 2008-09.)

Are We Headed for a Recession?

What is GO telling us now? According to the latest data in 2019, the economy is slowing down. GO rose only 1.6% in the first quarter, substantially less than GDP growth of 3.1%. That’s a sign of a struggling economy.

GO also is an important leading indicator. The economy is in a slow growth mode. So, I was not surprised when the government announced that the second-quarter real GDP rose only 2.1%, far less than the 3.1% rise in the first quarter.

The second-quarter GO will be released next month on Oct. 29.  At some point in the near future, the U.S. government said that it would release the GO and GDP figures at the same time.

It’s important that you read Forbes’s short introduction, followed by the podcast interview.

The following is a surprisingly positive comment from Austrian economist Walter Block, who has been a long-time critic: “Skousen is to be congratulated for creating an entirely new concept in economics, GO. There are not many social scientists of whom such a claim can be made, so this constitutes a gigantic feather in his cap. There are other instances of this phenomenon: Menger, Austrian Economics; Rothbard, libertarianism; Buchanan and Tullock, Public Choice; Coase and Posner, Law and Economics; Milton Friedman, monetarism, the negative income tax, school vouchers; Wenzel, Private Property Society… the fact that Skousen can even be mentioned in such august company is an indication of his creativity.” — Walter Block, Loyola University

If you want to know more about GO, go to www.grossoutput.com.

By the way, normally I don’t share personal investing stories in my column. But recently I “fessed up” to the biggest holding in my IRA in front of a small group in Washington, D.C.  For the longest time, this investment was off-limits to regular investors, but that’s all changed. In fact, it’s helped me become a millionaire, and I believe it can do the same for my readers.  Click here to watch my “TED Talk” presentation — and get the name of this investment.

Attend My Speaking Engagements in September

I have several exciting speaking engagements this month and I hope you can attend if any are convenient for you.

On Constitution Day, Tuesday, Sept. 17, I will be returning to the Wisconsin Forum in Milwaukee to address the topic, “Has the POTUS Become a PONTIFF? Power, Political Economy, and the Constitution.” It includes dinner and the price is $68.50. For details, go to http://www.wisconsinforum.org/. To purchase a ticket, contact Kristina Olkowski-Sayas at executivedirector@wisconsinforum.org.

After my stop in Milwaukee, I’ll be giving some lectures at Hillsdale College in Michigan, including one on Thursday, Sept. 19, on the topic “How Do You Get Rid of a Bad Idea (Democratic Socialism)? With a Better Idea — Democratic Capitalism!”

Finally, on Sept. 26-28, I’ll be appearing in costume as Benjamin Franklin at the Philadelphia MoneyShow: Other speakers include Ken Fisher, Dennis Gartman, Tom Sosnoff and John Buckingham. You can obtain free admission to the MoneyShow as my guest by calling 1-800-970-4355 and by mentioning pass code: 048316

Gold is back! Join me for the New Orleans Investment Conference, Nov. 1-4, 2019, Hilton Riverside Hotel. With gold and silver moving up sharply, I urge you to attend the New Orleans Investment Conference, the annual gathering of gold bugs. I will be there, as I have spoken at every New Orleans conference since 1976! Speakers include Dennis Gartman, Kevin Williamson, Steve Moore, Rick Rule, Mary Anne and Pamela Aden, Doug Casey, Adrian Day and Peter Schiff. This is the granddaddy of gold bug conferences. All details can be found at http://neworleansconference.com/noic-promo/skousen/.

Howard Schultz, the former CEO of Starbucks, is a social democrat who built a worldwide billion-dollar company that was not only profitable but was also socially progressive as it gave stock options, medical insurance, college training and other generous benefits to its employees (who he calls “partners”).

Schultz has been a lifelong Democrat, but recently became so disgusted with the direction of the Democratic Party’s move toward outright socialism that he left the party to make an independent run for the presidency.

He’s also not happy with the current crop of Democratic candidates, who are falling all over each other to see which one can promise more “free” goodies from the government and more killer regulations that could destroy the American way of life.

But last week, Schultz decided not to run for president, because he felt that an independent candidate would make it easier for Trump to win reelection. And he’s no fan of Trump either.

In his very first podcast, Steve Forbes did a two-part interview with Howard Schultz, who talked at length about his newly released life story, “From the Ground Up: A Journey to Reimagine the Promise of America,” available on Amazon by clicking here. Forbes read the entire book and recommends it, even though he does not agree with all of Schultz’s policy recommendations.