Skousen CAFE: Only One School Can Solve Today’s Economic Problems

“Little else is required to carry a state to the highest degree of opulence but peace, easy taxes, [sound money], and a tolerable administration of justice.”
— Adam Smith

I quoted Adam Smith last night at a big debate on the “Fiscal Crisis” facing the West. Rollins College, in Winter Park, Fla., sponsored the debate between Charlie Rock and Eric Shulz, of the school’s economics department, and me. Professor Rock is a Keynesian and Professor Shulz is a Marxist. I represented the Austrian or neo-classical school of economics. I taught at Rollins College for about 15 years before moving to New York, where I’ve subsequently taught at Columbia University and Mercy College.

I started off the debate with a warning — our economic way of life and standard of living are in jeopardy. We face these weighty challenges:

There is plenty to blame for our problems — on both the Democrat and Republican sides of the aisle.

I told the audience that the Austrians were the only school of economics that had real solutions to these problems. We have no choice but to adopt austerity, cutting back on an excessive welfare-warfare state. I recommended the following solutions:

I ended by quoting Ben Franklin: “A virtuous and industrious people may be cheaply governed.”

Professor Shulz raised the issue of inequality of wealth and income. I responded by suggesting that everyone read Whole Foods Chief Executive Officer John Mackey’s new book “Conscious Capitalism.” John provides a revolutionary stakeholder way to help everyone, including workers and executives, improve their standard of living. You can buy it at any Whole Foods store or from Amazon.

You Blew It! TSA’S Pathetic List of Reasons for Delays

Last week, I flew out of the Orlando airport and had to go through a long line to get through security. I had to laugh when I saw a sign from the so-called Transportation Security Administration (TSA) that read “Eight Most Common Reasons for Security Delays.” It listed items like putting liquids in carry-ons, failure to take off shoes, etc.

They forgot to list the #1 reason for delays: the TSA itself. They cause long delays by (1) never having enough screening machines for the number of travelers, especially during peak travel hours; (2) insisting on travelers going through time-consuming body scanners instead of metal detectors — they take five times longer to go through the process.

This inefficiency is typical of government compared to private enterprise. It usually takes me only a few minutes these days to check in with the airlines (with some exceptions) — there are seldom any delays unless I have to change my flight. Even checking luggage doesn’t take too long.

But then comes the hassle of airline security. The real delays occur at airline security — that’s where I find long lines. And that’s largely the fault of the TSA. It is typical of government. Whether you need to wait in line at the post office, the Department of Motor Vehicles (DMV) for a driver’s license, or the IRS office, it all involves the same — dealing with government bureaucracy. Compare that situation to the privately run grocery story or bookstore. When long lines develop, most of the time new check-out clerks are added rather quickly. The market responds!

The TSA is costly, not only in terms of wasted man hours ($1.2 billion annual budget for manpower and machines), but the airlines have fewer travelers (an estimated 5% reduction due to increased security since 2001), and the price of merchandise (such as water bottles) inside the terminal.

Whenever I go through the scanners at the airport, when they insist that I raise my hands, I say, “I surrender to the TSA.” It always gets the attention of the TSA agent (who may consider it an “insult” — indeed). 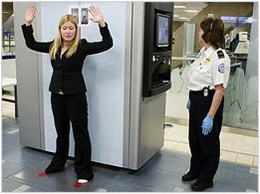 “I surrender to the TSA.”

To read my e-letter from last week, please click here. I also invite you to comment about my column in the space provided below.