“Ideally, the proper dividend policy should be to pay out nothing to shareholders. In fact, dividends do not matter in the long run.”

“Dividends are the critical factor giving the edge to most winning stocks in the long run.” — Jeremy Siegel, “The Wizard of Wharton”

My long-time friend and financial guru Joel Stern died suddenly last month at the age of 77. He is famous for inventing the fourth financial statement, Economic Value Added (EVA), and probably belongs in the “Guinness Book of World Records” for teaching at the most graduate schools in the world at the same time (Carnegie-Mellon, Chicago, Columbia, University of Cape Town, University of Singapore, etc.) He jokingly said he lived in a Boeing 747.

He was a regular speaker at FreedomFest. He wrote me last year, “I do not think I have a single adjective to describe how truly monumental FreedomFest is. You have people from such varieties of background it is hard to imagine anything like this happening with any other organization.”

Do Dividends Really Pay Off?

Joel loved to debate the merits of dividends. He was old school in this regard, maintaining that companies should not pay out dividends because first, it amounts to double taxation and second, it deprives companies of profits that can be used to expand their businesses. Certainly, Warren Buffett has followed this approach with his highly successful Berkshire Hathaway investment company.

But many others disagree, especially in regard to mature companies. Two years ago, he debated Rob Arnott, the father of smart beta, on the issue of dividends. Arnott has co-authored an academic paper proving that dividends do pay off for shareholders. The title of the article was, “Surprise! Higher Dividend = Higher Earnings Growth.” You can read the paper by clicking here.

As my long-term subscribers know, I agree with Rob Arnott, Jeremy Siegel and other academics who have shown that dividends do make a difference. My argument is as follows: If a company has adopted a rising dividend policy (most do), then it is constantly under pressure to perform better to pay out those increasing dividends. Incentives work!

While I disagreed with Joel Stern on some issues, we agreed on most issues and he will be missed. We are dedicating our three-day investment conference at this year’s FreedomFest to him. Won’t you join us?

A billionaire money manager told me that he planned to go to Europe this summer and couldn’t make FreedomFest. But then he looked at the program and changed his mind — he’s coming. Click here for our latest announcement of celebrity speakers, panels and debates:

When Joel Stern, a financial genius who invented two well-known measures in corporate finance, died suddenly a month ago, I thought for sure the Wall Street Journal and maybe even the New York Times would pay tribute with a major write-up.

We won’t forget him. We will dedicate a room to him at this year’s FreedomFest.

Why was Joel Stern deserving of a major obituary in the Times and the Journal?

Stern was one of the world’s most popular and creative teachers of finance — being a professor at six major universities all at the same time. He was famous for developing two of the most widely used metrics in corporate finance, Free Cash Flow (FCF) and Economic Value Added (EVA).

Talk to any Wall Street analyst and they will tell you how important these financial gurus are.

Here is his background:

Joel M. Stern was born in the Bronx and after attending Yeshiva Chaim Ozer and James Monroe High School, he studied economics and finance at the University of Chicago under two Nobel Prize winning economists, Milton Friedman and Merton H. Miller.

After graduating from Chicago, Stern went to work at the Chase Manhattan Bank as a close advisor to David Rockefeller. While at Chase, Stern developed the concept of Free Cash Flow. In addition, he was founding editor of the Chase Financial Quarterly, which is now known as the Journal of Applied Corporate Finance.

In 1982, upon the retirement of Rockefeller, Stern left Chase Manhattan Bank and co-founded Stern Stewart & Co. (now known as Stern Value Management) with G. Bennett Stewart III, where they developed the concept of EVA, a measure of opportunity cost and value.

During his life Mr. Stern guest lectured or taught at more than 75 universities worldwide, including MIT, New York University, UCLA, Universidad Francisco Marroquin (UFM) and Chapman University. He was a regular speaker at FreedomFest.

He published eight books and 150 papers in the fields of financial economics and public policy. I’m enjoying reading his autobiography, “Against the Grain: How to Succeed in Business by Peddling Heresy” (Wiley, 2003). In it, he tells of his encounters with Milton Friedman, David Rockefeller and Harry Openheimer, among others.

He was the financial policy columnist for the Financial Times of London and a frequent contributor to the Wall Street Journal.

For 17 years he was a rotating panelist on “Wall Street Week with Louis Rukeyser.” More recently, he appeared frequently on Bloomberg Radio and TV and CNBC.

He was considered by many, including The Economist, as the father of the shareholder value theory. But he was much more than that. To those that knew him and worked with him he was considered a father, a mentor and a friend. He was a source of wisdom and compassion. He will be dearly missed.

He is survived by his son, Erik Stern, his daughter in law, Michelle and their three children. 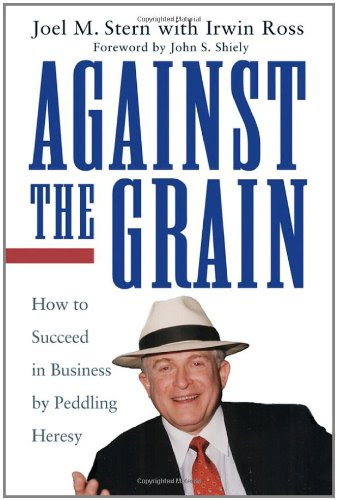 Look for his picture as you enter the Vendome A room at the Paris Resort, Las Vegas, where we are holding the three-day investment conference, “The Wild West of Wall Street,” at www.freedomfest.com.