The Heritage Foundation and the Reagan Ranch last week held celebrations of the 40th anniversary of “Reaganomics.”

Given that Congress was controlled by the big-spending Democrats throughout his eight-year administration (1981-1989), he was surprisingly successful in his mission, both here and abroad.

Reagan’s stature as president has been rising since he left office. He is now in the top ten of past U.S. presidents. Part of the reason for his success is foreign policy. Most historians give him credit for bringing down the Soviet Union, which he labeled the “evil empire.”

Like the panelists at the Heritage Foundation, I give Reagan good marks for his efforts. His biggest success was monetary policy. Because he defended Paul Volcker, the Fed chairman, inflationary expectations were subdued, interest rates declined sharply, and Reaganomics ushered in a new generation of prosperity, both in the United States and around the world. Tax cut fever is still felt around the world as country after country has reduced corporate tax rates.

In 1981, I wrote a promotion for my fledgling financial newsletter, Forecasts & Strategies, entitled, “The Financial Shock of 1981.” If you opened the envelope, it read, “REAGANOMICS WILL WORK: SELL YOUR GOLD AND SILVER AND BUY STOCKS AND BONDS!”

My gold bug friends violently disagreed with my assessment, and, in fact, the promotion failed.

Nevertheless, my crystal ball in 1981 proved to be accurate. We entered a long period of disinflation. Gold and silver went into a long-term bear market, and stocks and bonds went on a bull market that amazingly is still with us 40 years later. It was a supply-side success story.

My newsletter is still flourishing after this first bold prediction, and my crystal ball remains clear, though a bit cloudy lately. To subscribe, go to www.markskousen.com.

The Heritage Foundation’s celebration was a love fest. Nobody talked about President Reagan’s mistakes in the 1980s, such as his war on drugs, his failure to privatize Social Security in 1982 (instead, he raised FICA taxes and expanded the tax base), his failure to stop the ballooning deficits and a lost opportunity to return to a gold standard.

He could have done more to reduce regulations. He disbanded the federal air traffic control union but failed to abolish the dreaded Department of Education, and other wasteful and counterproductive government agencies.

He also signed into law two additional tax bills that only made the tax system more complex: The Tax Equity and Fiscal Responsibility Act of 1982 (TEFRA) and the Tax Reform Act of 1986.

TEFRA included a little-known provision that has become a monstrosity: the taxable Required Minimum Distributions (RMD). RMD is the hated requirement that seniors age 72 or older must withdraw 7-10% of their IRA retirement account each year and pay taxes on it — even if they don’t need the money. What the government giveth, it taketh away.

It should be abolished.

The 1986 tax act introduced the Alternative Minimum Tax and other complexities. It should have been called the “Accountants and Tax Lawyers Relief Act.”

While the AMT has been reduced, it too should be abolished. Congress should replace the entire tax system with a simplified flat tax.

Nevertheless, on balance, I give Reaganomics a B grade in an era where most politicians get Ds or worse. It is time to celebrate.

Liberty United Festival, Saturday, Sept. 11, Grove Park, Vineyard, Utah, 3-6 p.m. MDT.: I’ll be speaking on “Defending Our Constitutional Rights” along with other speakers, including Prager University ambassador Amala Ekpunobi. This is a free event, and there will be live music, food, games and spirited talks. Invite your friends and neighbors. The event is hosted by Jake Oaks and the Rod Arquette Show.

Come join me and over 60+ top trading and investing educators as we share our favorite strategies that are working for us right now. The Wealth365 Summit is the biggest and most prestigious trading and investing summit in the world and this is the hottest ticket this fall. You won’t want to miss it. Plus, it’s 100% free to attend and the $250,000 in prizes is pretty awesome too. CLICK HERE to register for the October Wealth365 Summit now! I’ll see you there!

Las Vegas MoneyShow, Sept. 12-14, Bally’s: Jo Ann and I will be speakers, along with Steve Forbes, Steve Moore, Keith Fitz-Gerald, Jim Woods, Wayne Allyn Root and many others.

My sessions will cover the following: “Bears Make Headlines, Bulls Make Money: My Top Investment Recommendations from the Maxims of Wall Street” and “Puzzles and Paradoxes in Money & the Economy,” where I’ll be auctioning off a jar of pennies to demonstrate both the wisdom of crowds and the madness of crowds. If you haven’t seen this experiment, you’re in for a treat. I’ll also be moderating a debate on cryptocurrencies vs. gold.

Kim Githler, president of the MoneyShow, is a HUGE fan of FreedomFest, and she has asked me to put together several FreedomFest sessions at the Las Vegas MoneyShow to give investors an idea of what they missed in South Dakota last month.

She has arranged for us to have an exhibit booth at the Las Vegas MoneyShow, and we will offer several special sessions on Tuesday, Sept. 14, that were popular at this year’s FreedomFest.

Jo Ann will speak on “The Misguided Appeal of Socialism,” followed by my own presentation, “My Most Successful Technique to Change the Minds of Students about Socialism, Keynesianism and the $15 Minimum Wage.” We will also have a talk entitled “Geopolitical Hotspots in Asia and the Middle East: Will China Replace America as the World Superpower?”

The Anthem Film Festival will present “Days Before the Dawn,” an award-winning short documentary about the student protests in Hong Kong, followed by panelists Simon Lee (Lion Rock Institute in Hong Kong), Keith Fitz-Gerald and director Trevor Klein. The panel will be moderated by Jo Ann Skousen.

Following the panel, the Anthem Film Festival will screen the award-winning short documentary, “Saber Rock”. Afghan interpreter Saber Rock worked with American troops for several years and is currently working to rescue his family from Afghanistan. He will join the panel and answer questions about the documentary and current events.

If you didn’t get to FreedomFest in South Dakota, come to the Las Vegas MoneyShow and find out what you missed.

The current registration fee for the MoneyShow is $199, but I’ve arranged for my subscribers to get the “early bird” discount of $149 if they register before Sept. 1. After that, it goes up to $199. The fee includes all the general and breakout sessions (with a few exceptions), and it includes the special FreedomFest sessions on Sept. 14.

To take advantage of the early-bird discount, call the MoneyShow at 1-800-970-4355, and ask for Kathy. Use code 054072 to get the $149 price. Also ask about the special hotel rates at Bally’s, including a reduced resort fee of only $20. Parking is free at the Bally’s Hotel. You can also click here to purchase tickets!

Celebrate My Birthday in New Orleans!

New Orleans Investment Conference, Oct. 19-22, New Orleans Hilton Hotel: Join me on my birthday (Oct. 19) as I discuss the significance of the October 19, 1987, crash… Other speakers include former congressman Ron Paul, Jim Grant, Rick Rule, James Rickards and Brien Lundin… To register for the “granddaddy of investment conferences,” go to www.neworleansconference.com, and be sure to mention you are a subscriber to Investor Cafe.

Mark Skousen School of Business is No More

This week I learned that Grantham University, the Kansas-based online university that houses the Mark Skousen School of Business, has just been sold to the University of Arkansas for one dollar! To read, click here.

Sadly, the Skousen School of Business is no longer. All schools at Grantham will have a generic name in the future.

It was a nice 15-year run. The naming of the school made the student newspaper at Columbia University, where I was teaching at the time. I used to joke, “To have a business school named after you, you had to be a billionaire, or dead.” I said I was a billionaire — in pesos.

It was indeed an honor and I worked hard to make sure the Skousen Business School was a success. I wrote a personal finance textbook, which was given out to every business student when they enrolled. It taught them the virtues of saving, investing, entrepreneurship and keeping out of personal debt. My daughter Lesley taught several Grantham courses in history.

Several times I went out to the graduation ceremonies in Kansas City to present the graduation certificates to the business students, most of whom had a connection to the military. It was a moving experience. I even got to give a commencement address. I quoted Mark Cuban: “Follow the green, not the dream.”

Meanwhile, I’m proud to be associated with Chapman University here in California. In 2019, I received the “My Favorite Professor” Award from the students: https://news.chapman.edu/2019/09/06/my-favorite-professor/. That was another surprise. 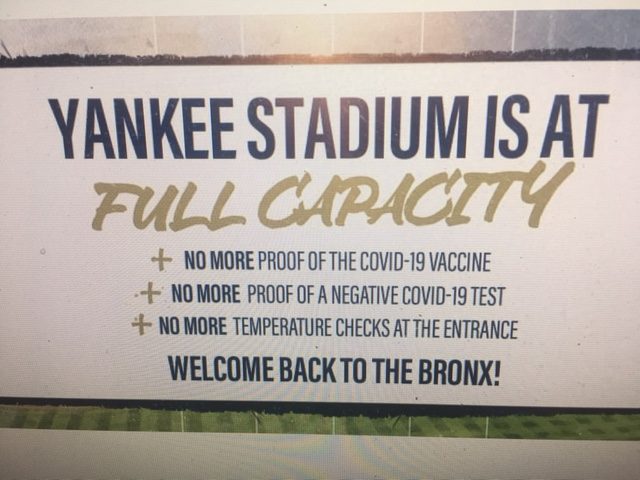 My favorite baseball team, the New York Yankees, is on an 11-game winning streak.

On the team’s website, I see the stadium is back to full capacity with no mandates on the fans. I wonder how long it will last.

The new governor Kathy Hochul appears to be more authoritarian than the discredited Andrew Cuomo. Here’s the headline:

Democrats seem to be hell-bent on mandates and prohibitions, restricting our freedoms wherever we go, whether in New York or California. I see that Bill de Blasio, the imperial mayor of New York City, now requires everyone to show proof of vaccination to enter any restaurant, school, or business. (Does that apply to Yankee Stadium?)

How about letting consenting adults decide for themselves? That’s the traditional American way. If you can’t persuade people to get vaccinated or to wear masks, perhaps you need to develop better arguments to convince people rather than imposing your authoritarian will on your citizens.

Remember: “The triumph of persuasion over force is the sign of a civilized society.” See the “Persuasion vs. Force” pamphlet by Mark & Jo Ann Skousen.

Civilization seems to be in decline.