Who Was that Masked Economist?

Special Announcement from the Publisher

I am thrilled to announce the launch of our Eagle Investing Network YouTube Channel. You’ll find lots of great videos to help you navigate the markets and become a better investor. Click here now to check it out — and be sure to subscribe, so you don’t miss any new videos, as we will post them at least weekly.

“Today more and more everything is either mandated or prohibited.” — “Tuto” Quiroga, President of Bolivia (2000-2001)

Today, the Wall Street Journal published an important op-ed “Who Was that Masked Economist? An academic group imposes 2020 rules on a 2023 conference.”

My commentary is about the American Economic Association.  I’ve been a member for years and enjoy going to the annual AEA meetings.

The annual gathering is famous for presentations on the latest advances in economics and finance. We hear from top economists, including an address by the current Fed chairman. In the past, I’ve heard and met Paul Volcker, Alan Greenspan, Ben Bernanke and Janet Yellen.

This January, the meeting will be held in New Orleans, Louisiana, a city I love for its jazz, restaurants, diverse culture and warm climate.

But sadly, I won’t be going.  I was shocked that the AEA has imposed strict vaccine/booster/mask requirements to attend and speak in New Orleans. Seriously?  I say “Enough!”  Read my editorial here: Who Was That Masked Economist? – WSJ.

“The uniform, constant, and uninterrupted effort of every man to better his condition is frequently powerful enough to maintain the natural progress of things toward improvement, in spite of both the extravagance of government and the greatest errors of administration.” — Adam Smith, “The Wealth of Nations” (1776)

There’s no greater example of the battle between the optimists and the doomsayers than the following questions:

Has our standard of living increased during our lifetimes?

Will our children and grandchildren enjoy a better life?

Labor economists complain the loudest about stagnating wages. As Robert Reich, former Secretary of Labor under President Clinton, stated a few years ago, “The typical American worker now earns around $44,500 a year, not much more than what the typical worker earned 40 years ago, adjusted for inflation. Although the U.S. economy continues to grow, most of the gains have been going to a relatively few top executives of large companies, financiers, and inventors and owners of digital devices.”

The pessimists point to this official government chart from the St. Louis Fed that shows that real wages have actually fallen since the early 1970s.

But sometimes statistics lie; they don’t tell the whole picture. The FRED chart above ignores the non-wage benefits workers now receive, such as medical and life insurance, paid vacations, childcare and advanced education.

The chart below shows that when benefits are included, total compensation has increased significantly since the early 1970s. 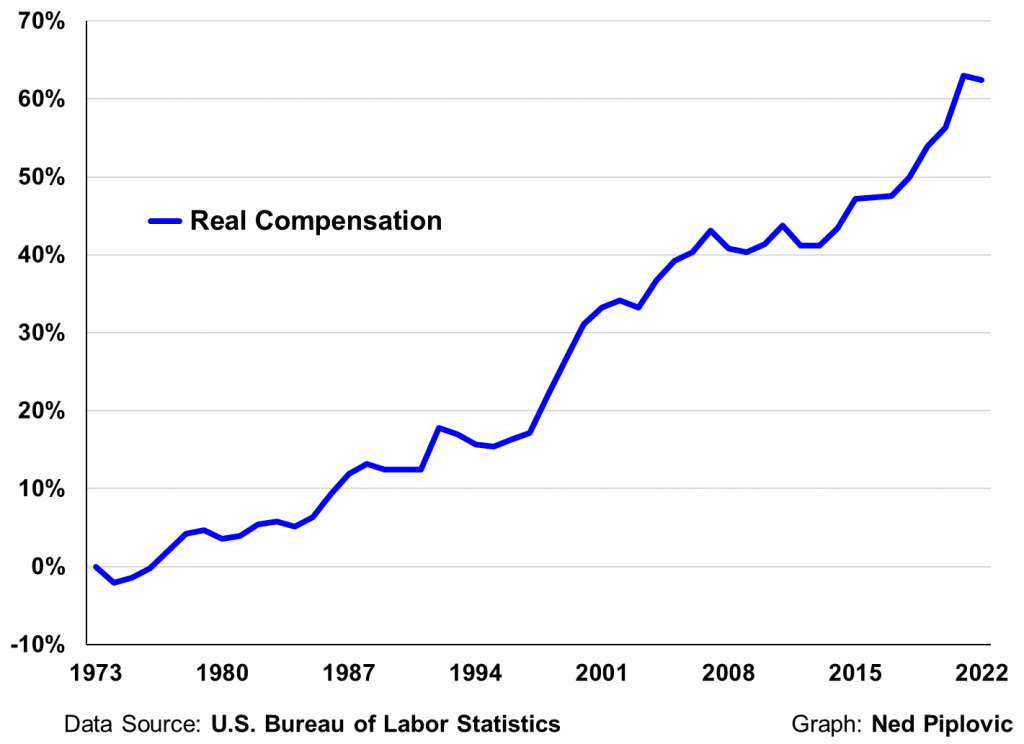 In chapter one of both my textbooks, “Economic Logic,” and “The Making of Modern Economics,” I use alternative measures rather than real wages to demonstrate the dramatic rise in our standard of living since the early 1970s.

Back then, there were no cellphones, personal computers, cable TV or the Internet… Over the years, automobiles have vastly improved… Pollution is way down… Houses are bigger and better equipped. The list goes on and on.

The charts and statistics in “Economic Logic” and “The Making of Modern Economics” are a real eye-opener to students, showing that the real wages approach misses so much of what is really going on. (To purchase either book, go to www.skousenbooks.com).

Economists Marian Tupy (Cato Institute) and Gale Pooley (BYU-Hawaii) have come up with a new way to measure economic growth, what they call “time” prices.

Time prices tell you how many hours you need to work (based on people’s actual wages/salaries) to purchase a television, an automobile, food, entertainment or a trip to Hawaii. 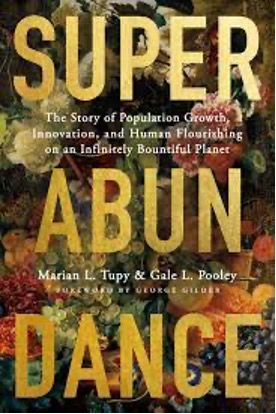 In their new book “SuperAbundance: The Story of Population Growth, Innovation, and Human Flourishing on an Infinitely Bountiful Planet,” published by Cato, they use numerous examples of “time” prices to show that our standard of living has never been higher, and that trend is likely to continue.

For example, gas prices are now at an all-time high (over $4 a gallon). But let’s look at it in terms of “time prices.” In 1929, it took about 24 minutes to earn the money to buy one gallon of gasoline. Today, the time price is closer to six minutes. The time price of gasoline has dropped by 75%.

Take another example: Food prices are rising rapidly these days. But Tupy and Pooley looked at a basket of 42 food times and found that it took over 40 hours of work in 1929 to purchase these food items, but today it takes around 10 hours!

They applied “time pricing” to all kinds of products and services — commodities, housing, automobiles, etc., — and found the same pattern.

Contrary to the pessimists who fear overpopulation and the running out of resources (see chapter three of my book “The Making of Modern Economics” about the Malthusian thesis), Tupy and Pooley conclude just the opposite: Resource abundance increased faster than the population — a relationship that they call “superabundance.”

But large populations are not enough to sustain superabundance — just think of the poverty in China and India before their respective economic reforms. According to “SuperAbundance,” people must be allowed to think, speak, publish, associate, and disagree. They must be allowed to save, invest, trade, and profit. In a word, they must be free.

The authors demonstrate that the so-called “scarcity” argument that we are using up our scarce resources is unduly pessimistic: between an educated and growing population and an earth with a surprising abundance of natural resources, there is no limit to our ability to survive and prosper.

Even with nearly eight billion people on planet earth! As the scripture says, “the earth is full, and there is enough and to spare.”

Hawaii Lectures, Sept. 14-16: I will be giving some lectures at BYU-Hawaii and Hawaii Pacific University. For more information, contact Gale Pooley at gale.pooley@byuh.edu and Ken Schoolland at ken.schoolland@gmail.com.

World Knowledge Forum, Sept. 20-22, Seoul, Korea: Considered the Davos of Asia, I am pleased to be a speaker for the first time. For more information, go to www.wkforum.org.

Whether on campus, in the boardroom or in government, jobs with “diversity, equity, and inclusion” (DEI) are popular. Human Resources (HR) is the fastest growing part of big business. Even Chapman University, where I teach, hired a DEI director, whose first recommendation was that we all read “The 1619 Project.” (I’m still waiting for him to recommend “The 1776 Project.”)

But there’s a problem: DEI often turns into DIE.

That’s the conclusion of a new book, “Getting to Diversity: What Works and What Doesn’t,” by Harvard sociologists Frank Dobbin and Alexandra Kaley.

Upon drawing on more than 30 years of data from 800 companies as well as in-depth interviews with managers, they discovered that diversity training often backfires. “Almost nothing changes,” they conclude. Management is still largely male and pale.

Why? It may be due to what economists call “Unintended Consequences.” Companies are so afraid of expensive lawsuits that they become more conservative in their hiring, and that means not adding minorities to their payroll.

Many people believe that businesses, academia and government should hire people based on merit only, not the color of their skin, religion or sexual preference. At the same time, studies show that companies increase their productivity with a more varied crew. We think our FreedomFest conference is better because of its diversity, and we work hard at achieving a balance.