New Green Deal? Not So Fast… Plus, My Contest with Rush Limbaugh

The energy crisis is back!

I well remember the energy crisis in the inflationary 1970s, when the intergovernmental Organization of the Petroleum Exporting Countries (OPEC) cut production and gasoline prices skyrocketed. In response, President Nixon imposed price controls, which led to shortages and long lines.

While I went to work for the CIA, my wife waited in line, sometimes for two hours, to fill up the car’s gas tank. But today’s energy crisis is different.

Thanks to deregulation and fracking technology, gasoline is plentiful. America no longer imports most of its oil from the Middle East, and is, in fact, the world’s largest producer of oil & gas.

Unfortunately, in the name of the global warming crisis, extreme environmentalists have oversold the idea that we need to move to alternative energy sources, such as wind and solar power, which are expensive and less productive than fossil fuels (plus, they still use a lot of traditional energy to produce).

California is leading the way by insisting that all new cars be electric by 2035. Other states and countries are following suit.

But then, in the past week, a massive storm hit Texas and other parts of the country.

The Wall Street Journal called the power shortages in Texas a case of the “Deep Green Freeze.” Texas and other states face rolling blackouts due to frozen wind turbines and excessive reliance on wind and solar, which can’t provide power 24 hours a day, seven days a week like natural gas, coal and oil can.

“Coal and nuclear are the most reliable sources of power,” the Journal noted.

But environmental alarmists are pushing to ban their use in the United States and even in Texas. Coal’s share of Texas’ electricity has plunged to only 18%, while wind’s share tripled to 42% of power before the freeze set in.

Meanwhile, The New York Times said nothing about the new “green” crisis, and even blamed freezing temperatures on global warming!

Oil prices have roared back from their collapse last April during the beginning of the lockdown. Traffic jams are back.

With President Joe Biden and the Democrats in power, one would expect demand for nonrenewable energy sources — oil, gas and coal — to dry up. But, in fact, prices for fossil fuels have risen sharply.

Both new trends have resulted in investors fearing reduced supplies of fossil fuels. Prices are moving back up. 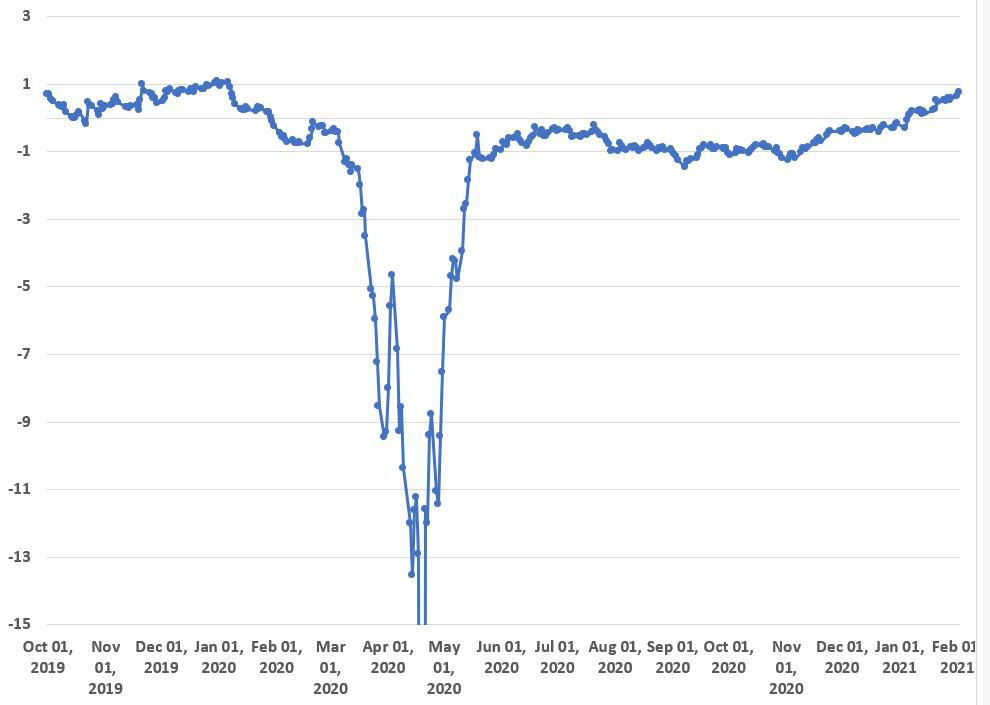 Today, crude oil is selling for more than $60 a barrel. And energy stocks are in a major bull market. (We recommend several energy positions in Forecasts & Strategies.)

Private economists are using my gross output (GO) statistic to predict the outlook for the economy in 2021.

GO is the “top line” in national income accounting that measures spending at all stages of production. Gross domestic product (GDP) is limited only to spending at the final consumer stage. As Steve Forbes puts it, “GDP is like an X-ray of the economy; GO is like a CAT scan.”

GO also turns out to be a good indicator of where GDP is headed in the next quarter.

Jerry Bowyer, CEO of Bowyer Research and a financial economist, concludes that, based on GO data in 2020, the outlook for business is bright.

For my latest press release on GO, go to www.grossoutput.com.

As long-time subscribers know, I depend on the Austrian theory of the business cycle to determine the tops and bottom of markets. This is one reason Forecasts & Strategies has consistently beaten the markets over the years.

My book, “A Viennese Waltz Down Wall Street” reveals:

“THE AUSTRIAN INDICATOR” predicted the recessions and market tops in 2000 and 2008… What is it predicting now?

My “Austrian Indicator” is not the traditional 10-year bond rate. Austrian economists wisely look at the whole “structure” of interest rates, especially the yield curve. When it turns negative, watch out! To learn more, go to pp. 45-48.

“Viennese Waltz” gives you everything you need to know about Austrian economics:

In addition, enjoy the infamous story of the time Dr. Skousen tore up Milton Friedman’s $20 bill on the Commander’s Palace restaurant in New Orleans. (see pp. 212-214) Not to be missed!

HOW TO ORDER? PRICED AT ONLY $20 POSTPAID AND AUTOGRAPHED!

“A Viennese Waltz Down Wall Street” is a 260-page quality paperback available for the special rate of ONLY $20 (20% off the $24.95 full price) with FREE SHIPPING in the United States.

To order, go to SkousenBooks.

Bonus Report: With your order, I’ll send you my special report, “Austrian Economics Investigates: Is Bitcoin the New Digital Gold?”

What Others Are Saying:

“Mark Skousen is America’s leading economic author because he roots his luminous books in the real world, in the grand tradition of the great Austrian economists. He is the Hayek of our era.” — George Gilder

“Skousen is the only economist I know who I can understand. He writes for the common man!” — Dr. Laurence Hayek, U. K.

My Contest with Rush Limbaugh

“I urge all of us to be bold, to strike out on our own and not to wait for the old guard’s permission.” — Friedrich Hayek

A giant has died! It may take a long time to replace him with his outsized personality and influence. He literally invented talk radio. He was #1 for 30 years. There was no #2.

We will dedicate a room to Rush at this year’s FreedomFest. He belongs on the Mount Rushmore of liberty lovers. I hope you will join us.

I met Rush back in January 2000 as a guest of some friends in Palm Beach, Florida. What surprised me was Rush’s real personality. On the radio, he was brash and domineering. He seldom had guests.

But away from the maddening crowds, he appeared to be humble and a good listener. Since it was the first year of the new millennium, we talked about the future.

President Bill Clinton was in his last year in office. What would be his legacy? I suggested that with the growing budget surpluses, it might be a perfect time to privatize Social Security. Rush was surprised and talked about it on the radio show the next day.

As it turned out, it was President George W. Bush who attempted to privatize Social Security, at least partially, but the idea was scuttled after 9/11 and the return of massive deficit spending.

At the end of our evening together, Rush and I had a fun contest. Who had the better physique? He was slightly taller. I was slightly older. We both had receding hairlines.

So, Rush and I compared waistlines. See the photo below. 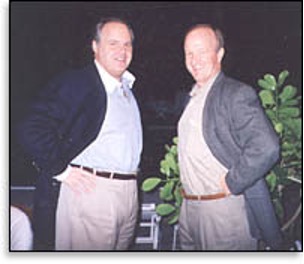 Who do you think won the contest?