Join Me in Washington, D.C. on Wednesday, May 29th…

At 1:00 p.m. that day, I’ll begin filming an important new investment video — and I want YOU to be part of our small, live audience. As a “thank you” for attending, I’ll personally hand you a signed hardcover copy of my book, Maxims of Wall Street. Additionally, I’ll conduct a short Questions & Answers session immediately following the taping. Please note: Seating is limited in the studio, so I encourage you to sign up now if you’re interested in attending. Click here for all the details and to confirm your seat. I look forward to seeing you in downtown Washington, D.C., on May 29!

Graduation season has begun and already graduates are being told, “Follow your dream… live your passion.”

A few years ago, movie mogul Steven Spielberg talked about his decision to drop out of college because he got a position at Universal Studies. It was a smart move for him, but he’s an outlier.

What about the rest of us? I met up with billionaire entrepreneur Mark Cuban, owner of the Dallas Mavericks and a panelist on the hit show “Shark Tank,” at the SALT conference in Las Vegas yesterday. (SALT is a conference for hedge fund investors, hosted by my friend Anthony Scaramucci, CEO of Skybridge Capital.) 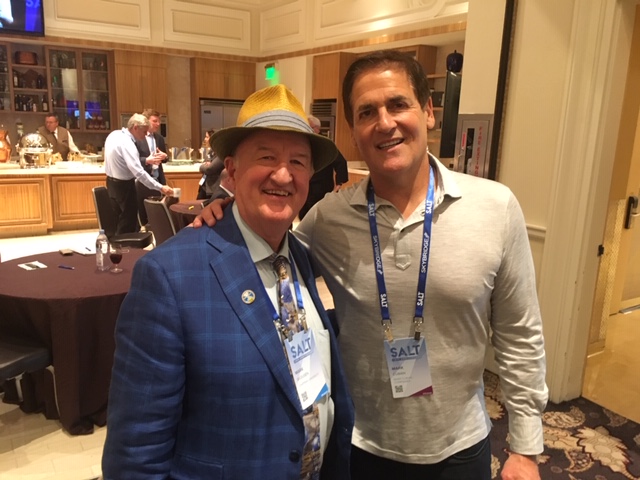 Cuban is famous for saying, “Follow the green, not the dream.”

He feels that, for most people, following your passion after college is a pipe dream. It won’t pay the bills, and you may end up living with your parents into your 30s.

The biggest mistake in business, he said, is for young entrepreneurs to be excessively idealistic, to go out to conquer the world rather than put food on the table. The best strategy is making a living, and then when you are successful, to follow your dream.

According to Cuban, a liberal arts education is the best for the long-term because specific skills are only useful short term. You need to be flexible in today’s rapidly changing world of technology.

Cuban told me that his two favorite books are “The Fountainhead” and “Atlas Shrugged,” by Ayn Rand. The name of his yacht is The Fountainhead. He says that while he is a libertarian in spirit, we have to deal with the real world of big government, and that means compromise.

I asked him about “Shark Tank,” and the sharp tongue of his fellow panelist Kevin O’Leary, known as “Mr. Wonderful.” Cuban told me that O’Leary really does believe that it’s only about the money.

Cuban expressed excitement about the debate I’ve organized at this year’s FreedomFest on Thursday, July 18, “The Libertarian Duel in the Vegas Sun,” between John Mackey (CEO, Whole Foods Market) and Kevin O’Leary.

The topic is “Conscious Capitalism vs. Pure Greed.” Mackey argues that business has a higher purpose — the good, the beautiful and the heroic. For O’Leary, it’s all about the money: “If you want a friend, buy a dog!” The sparks will fly!

Cuban loved the debate idea. “I wish I could be there,” said Cuban, who takes a family vacation every July when FreedomFest is held. Cuban also knows John Mackey and likes his “stakeholder” philosophy.

Cuban said he’s the number #1 investor and does more deals than anyone else on “Shark Tank”. He does the show because he wants everyone in America to believe they can achieve success as an entrepreneur.

He rejects the notion that start-ups are declining in the United States.

“There is no shortage of investments,” Cuban said. “America is still the land of opportunity,” he continued.

“To say that entrepreneurship is dying and socialism is coming is self-defeating,” he told the SALT audience.

Like John Mackey, Cuban believes in “democratic capitalism” — companies should encourage all employees to have some form of ownership in the company and hire minorities.

“Capitalism must help all people — growing inequality will cause social unrest due to disparity,” Cuban cautioned.

Meet Kevin O’Leary, Live and in Person at FreedomFest

Mark Cuban and I agree — Kevin O’Leary is the real deal, and you should make plans now to hear and meet him in person. O’Leary will speak Thursday morning, July 18, on “The Cold Hard Truth about Business and Investing,” then debate John Mackey on “Conscious Capitalism vs Pure Greed.” Finally, he will speak at a private luncheon on “The Insider Story of Shark Tank” (ticket required).

I urge you to sign up today to attend “the greatest libertarian show on earth” at www.freedomfest.com.

See you in Las Vegas in two months!

Who Cares About the Mueller Investigation!

At the SALT conference here in Vegas, MSNBC anchor Stephanie Ruhle moderated a panel with former Gov. Chris Christie and Attorney General Jeff Sessions. The topic was supposed to be “The Past, Present and Future of Trump,” but the moderator never did get to the future.

It was all about the past — the Mueller investigation about the Russian ties to President Trump and the 2016 election.

The media is obsessed with the Mueller investigation, even if the FBI report concluded that there wasn’t much to the Russian probe. Yet practically every question was about this topic.

It is not just MSNBC. It also is CNN and even Fox News. Meanwhile, the rest of the country couldn’t care less.

Why doesn’t the media talk about the real issues, such as the collapse of Venezuela into the hands of hard-core Communists? Or the soaring U.S. government deficit? Or the growing political, military and economic power of China?