Is Gold is a Good Hedge Against Inflation and a Stock Market Crash?

“The impact of the rate of inflation on the price of gold is like tracking the footprints of an animal.” — Julian M. Snyder (“Maxims on Wall Street,” p. 154)

Jay Martin invited me to be a keynote speaker for the first time at the annual Vancouver Resource Investment Conference this week. It was a pain going through all the Canadian bureaucracy to get here, but it was worth it.

Over 200 mining exhibits were on display at the conference on investing in gold, silver, uranium and other precious metals. I was surprised that no oil & gas companies were exhibited, even though the sector is in a major bull market. 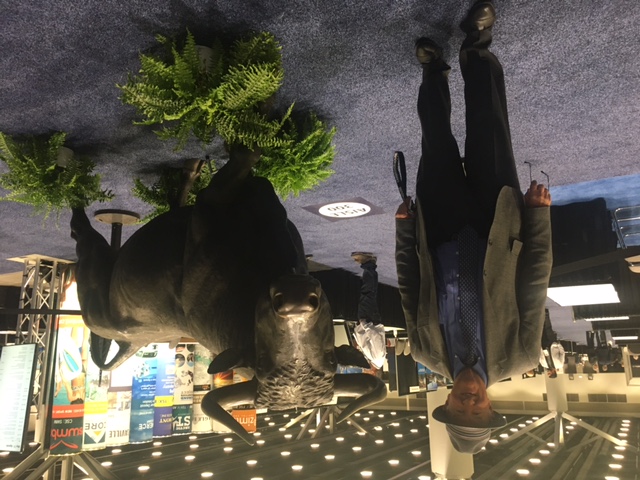 Here at the Vancouver Resource Investment Conference, I was called by attendees and introduced by emcees as “the legendary” Mark Skousen four times!  I must be getting old…

In several conference sessions, the big question on everyone’s mind was, “Why has gold underperformed as an inflation hedge when we’re experiencing the highest inflation in 40 years?”

It’s a tough question to answer. Certainly, gold has held up better than the stock market, which is in a major bear market. Stocks have traditionally done poorly during periods of rapid inflation, as the 1970s testify.

But gold has traditionally risen during times of inflation. Below, we see the strong link between gold and Consumer Price Index (CPI) inflation in the 1970s:

However, in the 2020s, the relationship between the price of gold and the CPI inflation is quite separate. 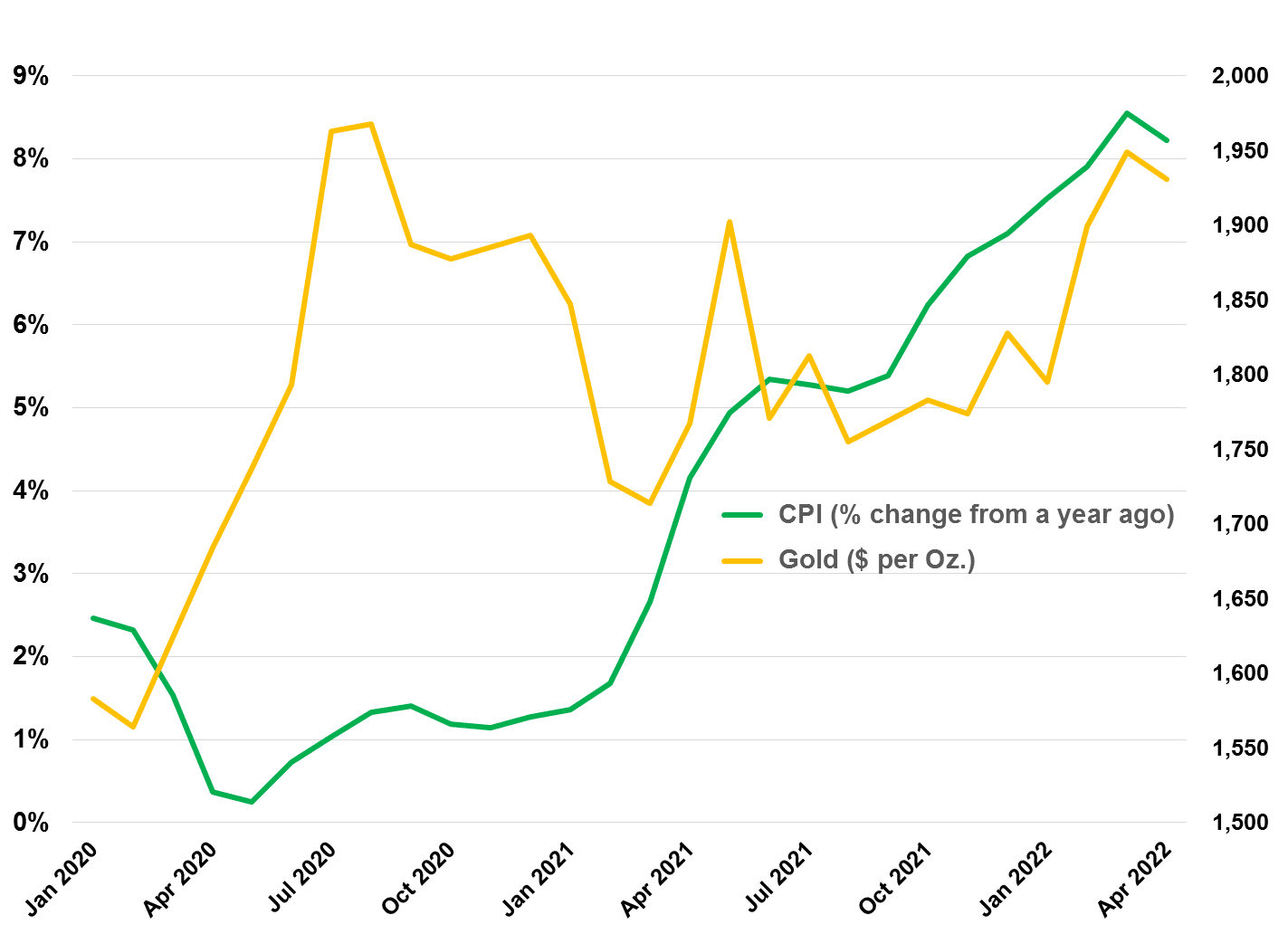 In the face of the highest inflation rate in 40 years, gold has underperformed. It rose sharply from 2018 to 2020 to over $2,000 an ounce in August 2020 in anticipation of higher price inflation, but it has not been able to decisively break through the $2,000 barrier ever since.

Currently, the price of the yellow metal is back down to $1,800 an ounce.

That’s not the inflation hedge we had predicted.

There are several explanations.

First, gold is a leading indicator of inflation. It’s always looking ahead. Gold rose in anticipation of more inflation in 2021 and 2022, but it is now suggesting that price inflation will come back down in 2023.

In fact, the Federal Reserve is now “fighting inflation” by raising interest rates and reducing monetary inflation. The money supply (M3) grew by 26% in 2020, but it has been slowing down sharply ever since.

Second, the U.S. dollar has been strong recently, especially during the Russian-Ukraine war. Since gold is priced in dollars, expect gold to struggle.

Third, gold has a new competitor. Bitcoin and other cryptocurrencies have played a role as new inflation hedges, especially during the pandemic.

Gold mining stocks have been far more volatile than gold, but they are still down only 3% for the year. Mining stocks have always been highly volatile. So, they can be good speculations during bull markets, but treacherous during bear markets.

I don’t know of a single major mining stock which has a long-term upward trend.

Gold itself is different. At Forecasts & Strategies, I’ve been recommending gold as a hedge. It should be in every person’s portfolio. 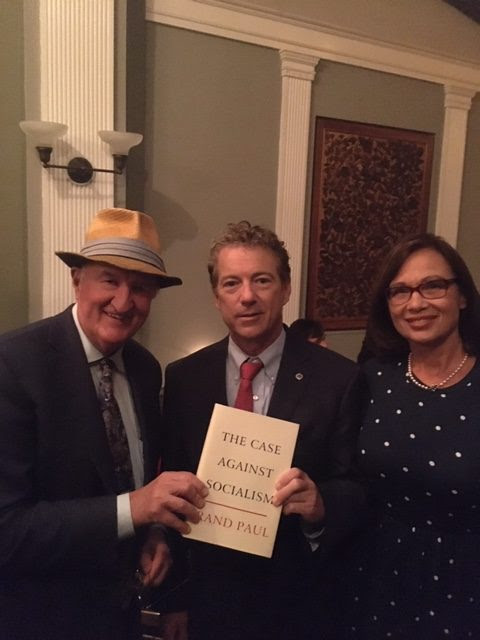 Mark and Jo Ann Skousen pose with Sen. Rand Paul and his new book, “The Case Against Socialism.”

Great news! Senator Rand Paul, the most influential libertarian in the Senate, has just confirmed he will be a keynote speaker at this year’s FreedomFest. This will be Senator Paul’s fifth appearance at FreedomFest, and his first since 2016, so you don’t want to miss what he has to say. He’s agreed to do a one-on-one interview with me and attendees on wide-ranging topics including the inside scoop on his fiery confrontations with President Biden’s chief medical advisor Dr. Anthony Fauci, Homeland Security Secretary Alejandro

Mayorkas and U.S. Department of Health and Human Services Assistant Secretary for Health Rachel Levine, the first openly transgender government official. Sen. Paul will give us his insights into the Biden/Harris presidency, dealing with a 50-50 split in the Senate, the Russian-Ukraine war and the chances Republicans will retake Capitol Hill in November. If you are registered to attend, I’ll try to work in your question to Dr. Paul. Email me at mskousen@freedomfest.com.

Senator Paul and I go back a long way. He first spoke at FreedomFest in 2011 as a freshman senator; We’ve traveled to Israel together in 2013 (see photo); my wife and I hosted a fundraiser for him in early 2020. I’ve known his father, Congressman Ron Paul, since the late 1970s. 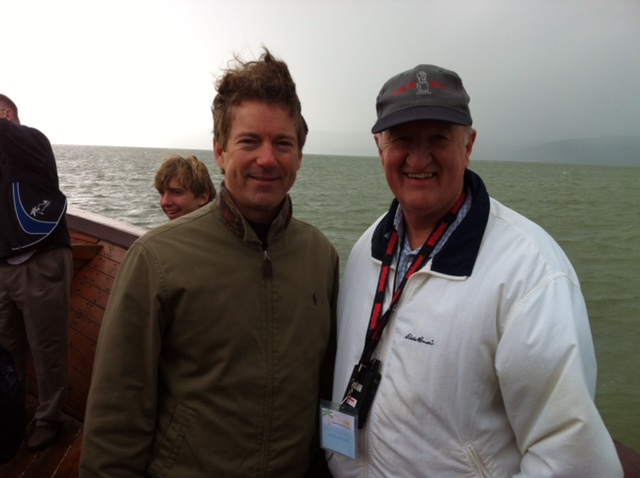 Sen. Paul and Mark Skousen travel on the Sea of Galilee in Israel in 2013.

FreedomFest gave Sen. Paul our annual Leonard E. Read Book Award for his latest book, “The Case Against Socialism.” Read his book, and get it autographed at FreedomFest.

To register, go to www.freedomfest.com, and use the code EAGLE to get $50 off the registration fee. If you have any questions about FreedomFest, email Hayley at hayley@freedomfest.com. We already have over 2,000 people signed up, including speakers and exhibitors. We expect a record crowd this year. Come join us in the festivities.

Speaking this Saturday at the Los Angeles Chapter of AAII

On a personal note, today I’m at the annual Vancouver Resource Investment Conference in Canada, and I will have a full report next week on the outlook for commodities.

Then, this Saturday, May 21, 9-12 a.m., I’ll be the second speaker at the LA chapter of the American Association of Individual Investors (AAII) at the Skirball Cultural Center, 2701 N. Sepulveda Blvd. in Los Angeles. I’ll be speaking on “The Madness of Crowds vs the Wisdom of Crowds: Puzzles & Paradoxes in Money and Investing,” where I will auction off a jar of pennies (not to be missed!). I’ll also sign copies of “The Maxims of Wall Street” and “The Making of Modern Economics” Both can be bought at www.skousenbooks.com.

The price of admission is normally $18 at the door, but you pay only $5 if you are a new guest. Skirball is still requiring proof of vaccination to come.

The Author of ‘Rich Dad, Poor Dad’ Becomes a Prophet of Doom

“We all have tremendous potential, and we all are blessed with gifts. Yet, the one thing that holds all of us back is some degree of self-doubt. It is not so much the lack of technical information that holds us back, but more the lack of self-confidence.” — Robert T. Kiyosaki, Rich Dad, Poor Dad

Robert Kiyosaki was a keynote speaker at the Vancouver Resource Investment Conference here in Canada. He is famous for his bestselling book, “Rich Dad, Poor Dad,” which has sold over 41 million copies.

The book is upbeat and promises you untold riches if you become an entrepreneur in business and real estate.  For Kiyosaki, America is the promised land of opportunity.

His quote “The poor and middle-class work for money.  The rich have money work for them” appears on page 23 of the “Maxims of Wall Street.”

Even so, I don’t agree with everything Kiyosaki says in his book. For example, he says that a home is a liability, not an asset. Not so! You need a place to come home to. And not everyone is suited to be a high risk-taking entrepreneur (the rich dad). There’s nothing wrong with working for others, saving a lot, living within your budget and investing the difference in the stock market or real estate.

But overall, Kiyosaki emphasizes the need to find what you’re good at and do it.

So, imagine my surprise when I saw that in 2002, he wrote a book called “Rich Dad Prophecy,” predicting “the biggest stock market crash in history.” He warned that it was inevitable and that every investor needs to be prepared for another Great Depression. 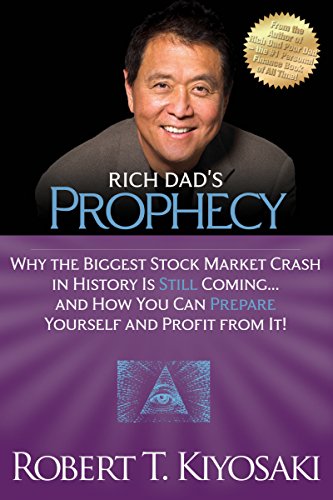 “Wouldn’t building a hotel, spa and golf course make more sense than an ark?” He asks, referring to the story of Noah in the Bible.

His timing couldn’t have been worse. The market bottomed within a year of his prophecy, and then in 2013, he doubled down on his doom-and-gloom prediction, only to see the stock market enjoy “the mother of all Bull markets” for another eight years!

At the Vancouver conference, Kiyosaki joined forces with Harry Dent in predicting another crash. We’re definitely in a bear market, but we have weathered these kinds of severe corrections before. We will do so again.

As J. Paul Getty warned, “Businessmen can profit handsomely if they will disregard the pessimistic auguries of self-appointed prophets of doom.” (Maxims, p. 112)

I have devoted several pages of “The Maxims of Wall Street” to bear markets and the Cassandras of the world.  To order the book, go to www.skousenbooks.com.