How to Never Lose Money Again in the Stock Market

Warren Buffett’s #1 rule is easier said than done. His own investment firm, Berkshire Hathaway, has lost as much as 40% of its money in bear markets over the years!

On my shelf, I have a book entitled “Wealth Without Risk,” which was written by the late Charles Givens. Is this possible?

Conservative investors and retirees have always dreamed of an investment that could make money during the good times and avoid losing big money during the bad years, such as the one we are experiencing now.

I have good news! There is such an investment. No, I’m not talking about the financial gurus who promise to make you money in bull markets while always avoiding the bear market through “guaranteed” technical trading systems. That’s almost impossible over the years on a consistent basis.

Even high-frequency trading is no guarantee of success during a bear market. Jim Simons’s Renaissance Technologies Fund, which became famous for making money in good times and bad, is down 12% this year.

Harry Browne created the “Permanent Portfolio Fund” years ago to protect you during bear markets and to make money during bull markets. You invest in stocks, bonds, gold and cash. This fund turns out to be losing in both and is down 20% this year. Over the long run, its return has been about equal to the return from a money market fund.

There is a better way.

Stock-Indexed Annuities Come to the Rescue

I’m talking about a great product offered by the major insurance companies — stock-indexed annuities. They are great for conservative investors who can’t stomach a crash or bear market.

My wife bought stock-indexed annuities right before the 2008 financial crisis and has more than doubled her money — and won’t lose any money this year.

As you can see from the chart below, an indexed annuity, starting in 2001, performed almost as well as the S&P 500 total return index (including dividends) through this year.

Both more than doubled your money, with a compounded annualized return of 4.6% for the S&P 500 (including dividends) and 3.9% for the indexed annuity (a 40% participation rate). 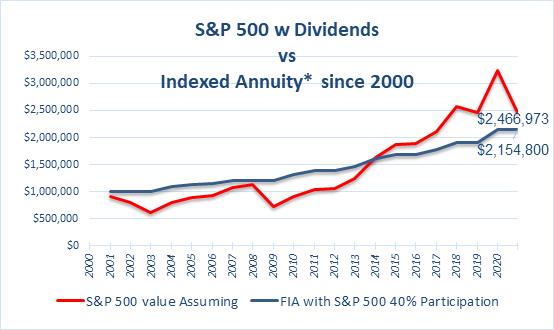 Disclaimer: *Indexed Annuity is linked to the S&P 500 with 40% participation in the up years and a 0% no loss protection floor in the bad years.

In this example, we used the annuity my wife bought with Midland Life, which has a 40% participation rate in the stock market. She got nearly the same return as the stock market with no downside risk! From 2000 to 2020, there were three major bear markets and owners of the stock-indexed annuities avoided all three. Now that’s what I call “peace of mind” investing!

Stock-indexed annuities are issued by insurance companies. They guarantee your principal every year. If the market drops 30%, you lose nothing.

Stock-indexed annuities take all the guesswork out of investing. If the stock market goes up one year, you make money. If it crashes the next year, you don’t lose money. Your principal is intact — at the higher level!

Plus, a stock-indexed annuity has a tax benefit. You don’t have to pay taxes until you take your money out!

It’s the best of all possible worlds. (You can learn more here in my latest research.)

What’s the catch? In most cases, the contract limits your upside when stocks go up. For example, Lincoln Life offers a 50% participation rate on the upside. If the S&P 500 rises 30%, you would profit by 15%. Due to the high demand for its indexed annuity, the company just cut its participation rate to only 20%. So, I’m not recommending that one right now. There are better deals out there.

How do insurance companies offer this guarantee without losing money? Traditionally, they hedge their positions by purchasing 70-80% in high-grade bonds and government securities and then invest 20-30% in stock-index call options.

Also, some financial experts have criticized annuities for being too expensive as they carry hidden fees, which you need to watch for.

What is the real risk? There’s only one — you want to make sure you buy an indexed annuity with an insurance company that will stay in business. Indexed annuities are not insured by the government like your bank account is. If the insurance company goes under, you could lose your investment.

The key is to stay with top-rated insurance companies that are rated A or better by A. M. Best.

So, if you are interested in investing in stock-indexed annuities, I suggest you contact Todd Phillips, Estate Planning Specialist, in Arizona now. He has investigated all the various indexed annuities out there and can answer all your questions. He has a really good stock-indexed annuity through Delaware Life that he can recommend now. Call him toll-free at 1-888-892-1102.

The Calming Influence of the Bible of Wall Street!

During times of crisis, religious people turn to the Bible for comfort.

Where do investors turn for comfort during a financial crisis? Many subscribers are turning to my classic bestseller, “The Maxims of Wall Street: A Compendium of Financial Adages, Ancient Proverbs and Worldly Wisdom.”

It even has quotes from the Bible!

Demand for my book has been strong during this crisis. Lately, I’ve received several letters from investors who have said that reading quotations from “The Maxims” has been comforting in these trying times as the market is tanking. I’ve been around the markets since the 1970s and have endured many crashes and busts. It never gets easy.

Warren Buffett recently wrote, “The stock market can go from green to red without stopping at yellow.” (see p. 112 of the “Maxims”) He’s a big fan of my book.

Steve Forbes said, “Everyone is a disciplined, long term investor… until the market goes down!” (p. 134) So true!

And this quote from Alexander Green, “It’s tough to catch the train after it has left the station.” (p. 176) He considers my book a “classic.”

I know subscribers who have a copy on their nightstand. It is a good source of wisdom for everyone who is staying at home these days. As Dennis Gartman said, “It’s amazing the wisdom one can gain from just one line in your book. I read it every day.”

The unprecedented action by the Federal Reserve and the federal government to this global healthcare crisis and financial panic has led us to have our own emergency meeting at FreedomFest, July 13-16, at the Paris Resort, Las Vegas.  You will want to be there because the latest crisis won’t be the last, and with out-of-control deficit spending and authoritarian controls are on the rise, you must be prepared for another round of “crisis investing.”  Especially if the Democratic socialists take control in November.

One of our keynote speakers is Professor Allan Lichtman, author of “Keys to the White House,” who has accurately predicted the winner of the presidential election every time from Reagan to Trump.  He will give his “surprise” prediction at FreedomFest.

Jim Woods and I will be there.  Other speakers include Dr. Jordan Peterson, Steve Forbes, Grover Norquist, Alex Green, Louis Navellier, Hilary Kramer, Tom Woods, and several senators (to be named soon) and a surprise speaker who requires Secret Service protection (to be announced shortly).  Over 200 speakers in all!

Over 800 people have signed up already, and nobody has canceled!

March Madness: State Officials Use a Sledgehammer to Crack a Nut

“More and more, everything is either prohibited or mandated.” — Jorge “Tuto” Quiroga (the former president of Bolivia)

All around the country, authoritarian governors and city officials are engaging in over-reach and are destroying our country and the economy in the name of public safety.

On both coasts from Florida to California, officials are closing beaches even though the “virus hates heat, sun, humidity and saltwater,” as one of my Florida friends told me. In Nevada, the overweening governor has closed liquor stores as an “unessential” service, but people can still go to the grocery store and buy all the beer and alcoholic beverages they want at the same time that small businesses fail.

By reviewing history, we can see that when the Hong Kong flu hit the United States in 1957, a few large conferences and other events closed, but businesses stayed open. The economy went into a mild recession and the stock market fell by 21%, but that was it.

In countries like Singapore, Hong Kong and South Korea, businesses remain open because the community worked together to fight and defeat the virus. Singapore and Hong Kong have reported virtually no deaths from the disease and South Korea only has had a handful. Can’t we learn from these countries?

I invite you to read my about the government using a sledgehammer to crack a nut that I have posted in the FreedomFest forum.