Publisher’s Note: Are you looking for a great Valentine’s Day gift? We were going through some areas of our office and found a box of beautiful rose pendants that were widely popular a few years ago. These are 24K gold and pure silver — a hard combination to find in any jewelry store. Click here now to learn more about these elegant pendants and put a big smile on a special person’s face on Feb. 14! But hurry, you need to order by Friday to ensure delivery by Valentine’s Day, and we have less than 20 of these left!

“How compassionate is it to create legislation that destroys an earning opportunity? The best way to help low-wage workers earn higher wages is to make them more productive.” — Walter E. Williams

Economists have repeatedly warned against the dangers of imposing a state-mandated minimum wage above the market rate — numerous studies have shown that it causes various degrees of unemployment, especially among minorities, entry-level workers and in states with a lower cost of living.

It may increase petty crime by unemployed youth.

It encourages small businesses to reduce employment hours and large corporations to replace workers with machines.

Many economists also believe that minimum wage laws are racist, and discriminate against minorities.

For a good summary of the case against a federally-mandated $15 an hour, see this column by the late George Mason University professor Walter Williams: https://www.creators.com/read/walter-williams/07/17/minimum-wage-cruelty

Despite these studies, the $15-minimum-wage idea continues to be popular both on the federal and state levels. President Joe Biden and most Democrats are moving ahead supporting a $15 federal minimum wage. On a state level, the majority of the public has repeatedly voted in state referendums to raise the minimum wage (Florida being the latest example).

Why are the warnings of economists ignored? One simple reason: Voting against the minimum wage sounds heartless. Voting for it appears to be show compassion.

Two years ago, the New York Times Magazine told story after story of how the working poor benefited from a higher minimum wage: “The $15 minimum wage doesn’t just improve lives. A living wage is an antidepressant. It’s a sleep aid. A diet. A stress reliever. It’s a contraceptive, preventing teenage pregnancy. It prevents premature death. It shields children from neglect.” (See “Dollars on the Margin,” by Mathew Desmond, The New York Times Magazine, February 21, 2019).

Who can oppose that?

How Do You Get Rid of a Bad Idea? With a Better Idea!

The challenge for those of us who oppose the state-mandated minimum wage is this: We need to provide a positive alternative — how can companies pay the working poor more without government interference, and thus achieve the same benefits reported in the New York Times?

You can’t get rid of a bad idea just by criticizing it. You have to provide a better idea.

In my classes at Chapman University, I provide a better idea that students find attractive.

After we study the pros and cons of raising the minimum wage, I create two categories on the blackboard or PowerPoint. On one side we make a list of “artificial” ways to raise wages, all of which require some form of government mandate. They include:

Then, we go through an analysis of the impact of these methods, many of which have unintended consequences.

After that, we come up with a list of natural ways to raise wages without government intervention. I show them a chart representing how average real wages have been increasing since 1950, even as the real minimum wage and unionization have been in decline. 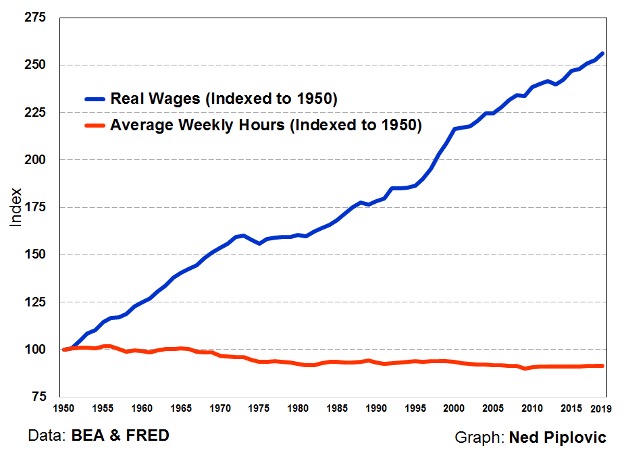 We discuss why wages have gone up naturally, and come up with a list that includes:

I ask students who work part-time (usually half of my students), “how do you get a raise?” Answers include: 1. Show your boss a way to cut costs, avoid waste or market a better product. 2. Graduate from college, get an MBA or learn new skills. Most companies will give raises to those who obtain an advanced degree.

These “natural” ways to raise wages tend to be permanent without the unintended consequences facing the “artificial” means.

Finally, I point out an important observation that students never forget: Companies that are more profitable usually pay their workers more.

How Secretaries and Other Employees Became Millionaires!

Firms with higher profit margins, especially technology companies, pay high wages, salaries and benefits. Many offer profit-sharing plans or stock options to boost their compensation. Microsoft is the best example. Over 30,000 Microsoft employees have become multi-millionaires because of its generous stock option plan. Microsoft stock has increased dramatically over the years because of high earnings and consistent profitability (currently over 33%).

My favorite example of workers getting a higher minimum wage without any help from the government is the famous Henry Ford “$5-a-day” story.

As a result of the success of the Model T, the Ford Motor Company, in 1913, doubled its profits from $13.5 million to $27 million. With these profits, Ford asked the board members to consider sharing the profits with his workers, who were earning only $2 a day. His proposal was met with considerable resistance. After four hours of debate over the cost of increasing wages, Ford exclaimed, “Stop it, it’s all settled. Five dollars a day minimum at once.”

The announcement made front-page news around the country and made Henry Ford an industrial messiah.

The effect of the instant pay raise was nothing short of sensational. There was a tremendous surge in Model T output and morale skyrocketed among Ford workers. Employee turnover dropped significantly, and workers became more productive. Thousands of potential workers moved to Detroit in hopes of getting a job.

Ford argued that the higher wage had two major benefits: Increased efficiency at the automobile plant and increased buying power for his workers. The $5 wage permitted Ford workers to buy their own cars for the first time. The next year, Model T production rose sharply, prices declined and profits soared again.

The bottom line: The best way to raise wages permanently, at all levels, is to adopt a stakeholder philosophy that benefits company owners and employees. Instead of interfering with wage contracts, governments should reduce business taxes and regulations, encourage tax credits, expand markets and, most importantly, encourage businesses to engage in profit-sharing for all employees.

Many Companies Are Already Raising Wages

If Congress acts responsibly, it won’t be long before practically every business can afford to pay their workers $15 an hour and still make money — without the long arm of the state.

Already, there are major corporations that have raised the minimum to $15 or more, without state interference, including Amazon, Costco and Whole Foods Market. Why? Because they were profitable companies and could afford to increase wages and salaries.

I’m pleased to announce that author Tom Woods, host of the popular daily podcast The Tom Woods Show and senior fellow at the Mises Institute, will be speaking on “Covid and the Two Americas” on Tuesday evening, March 2, at the Paddy’s Station Irish pub and restaurant in San Juan Capistrano, California. 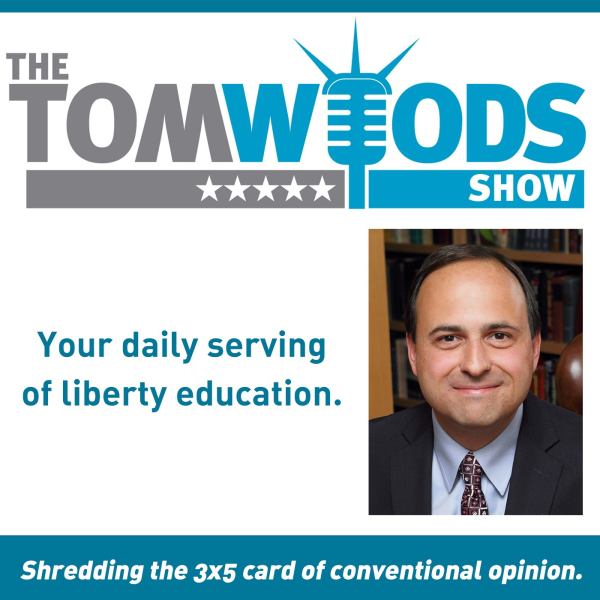 If you haven’t heard Tom speak, you are in for a treat. I’ve appeared on his podcast several times.

We will also be celebrating the late Murray Rothbard’s birthday on March 2. Rothbard died of a sudden heart attack in 1995. He would have turned 95 years of age on March 2.

I’ll be speaking on “How Murray Rothbard Changed My Life.” It will be a fun evening to have dinner, socialize, hear some great speakers and enjoy some live entertainment. We are taking over the entire restaurant, but space is limited. So, register now. Come early and get a good seat.

The other night, my family and I went to an award-winning Italian restaurant, Basilio’s, in Huntington Beach, California. This is a restaurant that has refused to close down during the virus scare. Tony Roman, the owner, is taking on the imperial governor of California, and so far, state officials have not shut him down. However, they are constantly harassing him, threatening to take away his liquor license, and criminally indicting him for his constitutional stand. 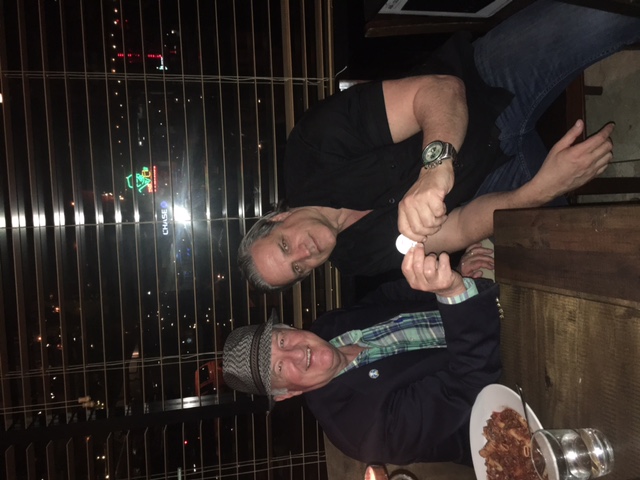 I presented Tony Roman a 2020 American Eagle silver dollar for his stand for liberty.

I admire this Italian stallion. He is one of the few to defend the Constitution and his First Amendment right to peacefully assemble. He has several amendments to the Bill of Rights posted outside his restaurant.

He told me, that when he first heard about the lockdown in California and other states, he said, “I couldn’t believe this was happening in America, the land of the free. I can see it happening in China, or Russia but not the United States.”

He also told me, that, so far, no one has reported getting the virus after eating at his restaurant.

By the way, the food was delicious!