Good News for Investors: My #1 Indicator Has Never Been So Bullish

The federal government (Bureau of Economic Analysis or BEA) confirmed today, June 24, that the economy is working on all four cylinders.

First-quarter 2021 adjusted real gross output (GO) — which measures spending at all stages of production — rose an astonishing 11.5%, hitting a record $48.6 trillion. That is almost double the 6.4% growth in real gross domestic product (GDP).

Whenever the top-line, GO, grows substantially faster than the bottom-line, GDP, it means a strong economic recovery and is bullish for the stock market.

Moreover, for the first time in memory, every sector of the private industry rose in nominal terms in the first quarter, especially mining (up 66%), utilities (climbing 49%), arts and entertainment (jumping 31%) and transportation and warehousing (growing 29%). However, health care and social assistance were up only 2%.

The only negative was the inflation indicator — it continues to increase steadily and alarmingly at more than 8%.

My press release on GO will be posted online at www.grossoutput.com.

“These traders are left to their free course; and the more they make, and the richer they are, and the more largely they deal, the better both for the farmer and the consumer, between whom they form a natural and most useful link of connection.” — Edmund Burke (1795)

One of the most popular prejudices is against merchants, traders, wholesalers and speculators who play an essential role in commerce between the producer and the consumer.

For centuries, these “middlemen” have been vilified, hated and maligned as monopolists whose only purpose is allegedly to raise prices and take advantage of consumers.

This perverse attitude is especially evident during a hurricane or other natural disaster in which shortages occur and speculators take advantage and “gouge” the public.

Many cities and states impose severe penalties for “price gouging” during a hurricane or energy crisis.

But the fact is that the middlemen and traders play a vital role in the dynamics of commerce. As the great 18th-century statesman Edmund Burke warned Prime Minister William Pitt in England, “Of all things, an indiscreet tampering with the trade of provisions is the most dangerous, and it is always worst in the time when men are most disposed of it — that is, in the time of scarcity.”

Cooler heads should prevail during a crisis. Raising prices during a shortage is an efficient rationing device that also has the benefit of encouraging new supplies to come on the market.

‘The Middleman’ is An Essential Stage of Production

In my textbook, “Economic Logic,” I develop a universal four-stage model of the economy as follows: 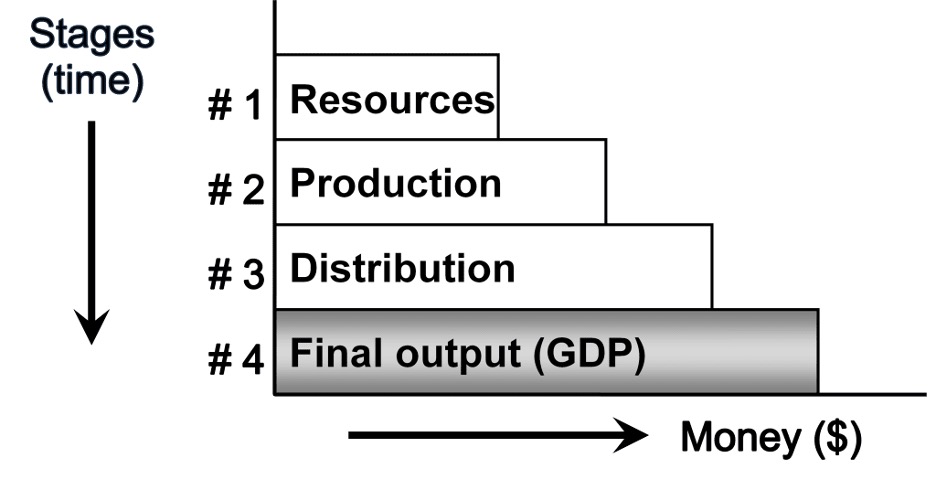 You can see how important stage #3 — distribution — is to move the produced products (stage #3) to their final use (stage #4) and how it adds value. Every stage is essential to reach the final consumer.

In the above diagram, gross output (GO) measures all four stages of spending, and gross domestic product (GDP) accounts for final output only.

Since 1990, in my book, “The Structure of Production” (New York University Press), I’ve been advocating that the government publish both GO and GDP at the same time, just as publicly traded companies release quarterly financial statements.

Good news. Since 2014, the Bureau of Economic Analysis (BEA) has reported both the top line (GO) and the bottom line (GDP) in national income accounting. Both are essential to understanding what is going on in the economy.

Unfortunately, the BEA’s GO statistic is defective. Oddly enough, the BEA currently uses a limited measure of total sales of goods and services in the production process. Once products are fabricated and packaged at the manufacturing stage, the BEA’s GO only adds “net” sales at the wholesale and retail levels.

Consequently, it omits more than $9 trillion in business-to-business (B2B) transactions in its GO statistics! Thus, BEA’s official GO for the 2021 first quarter is $39.4 trillion, $9 trillion short of what it should be.

Why this serious omission? I think it harkens back to the day when output was considered complete once a product was finished, such as an automobile coming off the assembly line. The middleman then was simply moving it along to the consumer.

As a BEA official explained, “since there is no further transformation of these goods to the production process, they are excluded from the wholesale/retail trade output.”

Yet another stage is necessary to get the product to the final user — and if businesses are writing checks on the way, the gross amounts should be counted. The BEA is ignoring the importance of location economics.

I include them as a legitimate economic activity that should be accounted for in GO, which I call Adjusted GO (GO*): $48.6 trillion.

For more information, go to www.grossoutput.com.

Media giant Townhall has just named FreedomFest the #1 “Big Ideas” conference in the country, ahead of the Davos, Milken and SALT conferences. Jerry Bowyer, Townhall’s premier financial columnist, writes, “FreedomFest has become the largest and most influential gathering of thinkers devoted to promoting freedom in all its forms.” Jerry is coming this year as a speaker who will talk about how he uses my Gross Output (GO) statistic to make money in the markets.

We already have more than 2,000 registered attendees (see the latest official chart below) — we do not exaggerate our conference numbers like other event organizers. We could have a record this year. Over a hundred people are signing up every week. 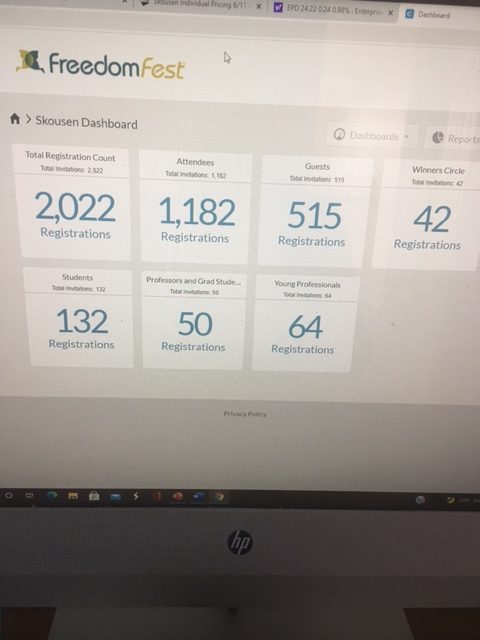 Fun Things to Do at FreedomFest This July

Our line-up of speakers, panels and debates can’t be beaten. Our entire program has now been posted online. See 2021 Agenda — FreedomFest.

But there’s more! We always have a lot of fun events and activities for attendees and family members every July. I went through the entire program and made a list of all the unusual things going on.

—South Dakota is offering some great excursions, including trips to the Mount Rushmore lighting ceremony, Chief Crazy Horse Monument, Deadwood (where Wild Bill Hickok was murdered), Custer State Park, an 1880s-style train ride through the Black Hills and incredible views of the Badlands.

–Unique sessions such as “God is a Mathematician” by Daniele Struppa (president of Chapman University and a professional mathematician)… “How to Make Your Book #1 on Amazon” with Marji Ross (former publisher of Regnery Books) and marketing genius Michael Beas… “The Golden Age of Jazz: celebrating 100 Years of America’s Unique Art Form” by jazz enthusiast Gary Alexander… Professor Ken Elzinga on “Fifty Years and 50,000 Students at Mr. Jefferson’s University: A Professor’s Reflections on Academic Freedom”… and my own Saturday breakfast topic, “Puzzles & Paradoxes in Money and the Economy” based on my popular college course at Chapman.

–Don’t miss all the activities in the exhibit hall at the Opening Cocktail Party, including our very own libertarian magician Peter Studebaker, my “White Mates in Two” chess problem, and Pablo and Hayley entertaining us with music and song… Plus, don’t miss the #1 most popular Native American band “Brule” at the Saturday Night Gala Banquet.

Remember, subscribers to my newsletter and trading services get a 2021 American eagle silver dollar and a signed copy of “The Maxims of Wall Street” at our special Eagle private meeting at FreedomFest on Thursday, July 22. The room at the historic Alex Johnson Hotel (where Ronald Reagan and five other presidents have stayed) is limited to 250 subscribers and we are almost full.

P.S. Sign up for This Timely Subscribers-only Teleconference on June 29 with Dr. Mark Skousen

You are invited to an exclusive subscribers-only teleconference with Dr. Mark Skousen on Tuesday, June 29, where he will discuss “Will the Fed Kill the Bull Market.” Be sure to reserve your place by clicking here.

I Jumped the Gun Attacking This New York Times Writer

In my June 3 “You Blew It” column, I lambasted the University of Chicago Press for choosing New York Times economist Binyamin Appelbaum for writing the preface of a new paperback edition of Milton Friedman’s classic “Capitalism and Freedom.”

I criticized the choice because Appelbaum is the author of the notorious book, “The Economists Hour,” which blames all of the ills of the economy on Friedman, including the financial crisis of 2008. Friedman, Hayek and other free-market economists are called “false prophets” because they supported lower taxes and deregulating the economy.

However, I wrote the column before reading the preface by Applebaum. It turns out that Applebaum’s introduction is actually quite positive and accurate in his assessment of Milton Friedman as a public intellectual.

If you have not read Milton Friedman’s “Capitalism and Freedom,” or have not read it recently, I recommend you order this new release. See why Time magazine calls it “One of the ALL-TIME 100 Nonfiction Books.”

The new paperback edition can be found in Barnes & Noble bookstores or on Amazon.

On a personal note, I played a small but important role in the publishing of “Capitalism and Freedom.”

Incredibly the first edition of the book did not include an index. I chastised Friedman for this oversight, and lo and behold, the next printing and all future editions have included an index. 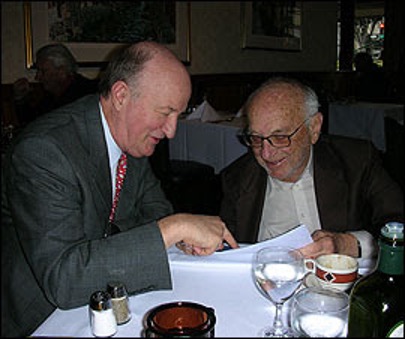 Your editor meets Milton Friedman in 2006.

I had a long and prickly friendship with Friedman for twenty years. Click here to read my story.

It includes the account behind my tearing up Friedman’s $20 bill.