Be a Contrarian for a Day – and Win Big!

“Buy when everyone is selling and hold until everyone is buying. This is more than a catchy slogan. It is the very essential of successful investing.” — J. Paul Getty (“Maxims of Wall Street,” p. 46)

Investors are always told to be a contrarian, to bet against the crowd. “Don’t buy what’s hot — buy what’s not,” says Rick Rule.

They say that all the most successful investors were contrarians — Warren Buffett, Sir John Templeton and George Soros.

“You can’t buy what’s popular and do well,” advised Buffett.

“Invest at the point of maximum pessimism,” declared Templeton.

‘Buy When Blood is Running in the Streets’

The famous line about contrary investing in the subheading above is by Baron Rothschild, who said, “Buy when blood is running in the streets.”

Alex Green, the chief investment strategist at the Oxford Club, followed this approach and decided to issue a “buy” signal on Tuesday, March 24, when it seemed that everyone was selling and expecting an end of the world scenario.

The market had crashed 30% over the course of a month because investors feared that another depression was just around the corner. Alex figured we were witnessing what John Templeton called “maximum pessimism.”

Indeed, it turned out to be a great call. The market has rallied sharply since then, even though the economic news has been bad. (The market is always forward-looking.)

Alex Green will be one of our keynote speakers at the 40th anniversary celebration of my newsletter at www.freedomfest.com (July 13-16, Las Vegas). He has one of the best track records in the country. Join us!

I’ve also tried my hand at jumping in at the point of maximum pessimism or maximum optimism from time to time.

Let me give you two examples. In December 1999, I visited the office of Princeton University Professor Burt Malkiel, the author of “A Random Walk Down Wall Street.”

I had been super bullish with regards to the stock market at that time. Then, he showed me a scary chart of the NASDAQ going hyperbolic.

Even though Malkiel was a firm believer in the efficient market theory and didn’t believe in predicting the direction of the market, we both looked at each other and said, “It’s time to sell!”

Within three months, the NASDAQ had topped out and went through a treacherous three-year bear market.

The second example took place on February 14, 2009, when my wife and I had a “Valentine’s Day” dinner with Jeremy Siegel and his wife in Philadelphia. Siegel is considered the “Wizard of Wharton” and author of the bestseller, “Stocks for the Long Run.”

The stock market had fallen 50% due to the real estate collapse in 2008, and everyone was worried.

Before we left for dinner, Jeremy and I went into his office and he showed me his long-term chart for U.S. stocks from 1800 to the present. He noted that the stock market hit its bottom whenever it fell around 50% from its highs. There was only one exception: 1929-1933, when the stock market fell 90%.

That was due to the Great Depression.

He asked, “Are we headed for another great depression in 2008-09?” We agreed that the Fed was intervening to keep it from happening. So, we both decided right then and there that stocks were a “screaming buy.” In my March issue of Forecasts & Strategies, I gave a strong buy signal for stocks, which turned out to be the bottom. The stock market went on to achieve the “mother of all bull markets,” which only ended in 2020.

A new contrarian opportunity arose two weeks ago, when the price of crude oil fell to nearly zero. I took a big chance and recommended a pipeline company whose share price had fallen by 60%. It turned out to be a good call — it is already up 14% from its low. Plus, it has already paid a generous dividend.

Airline and cruise ship stocks are dirt cheap right now. Are they at or near the bottom now that Warren Buffett has sold out of airline stocks?

Humphrey Neill is considered to be the father of contrarian investing. In his classic book, “The Art of Contrary Thinking,” he declares, “The public is right during the trends, but wrong at both ends.”

Only at extremes is the public wrong. And determining the top or bottom of markets is not easy.

Over the past month, I recommended a financial stock that had fallen 30% from its high. I thought it was a super bargain and recommended it. But, it continued to fall another 30% before making a dramatic comeback.

Ron Miller, a broker at Raymond James and a long-time friend, said, “The problem with being an early contrarian is that the blood in the street may be yours!”

Here’s one of my favorite sayings that applies to the above example.

Get Your Own Copy of the Bible on Wall Street

My book, “The Maxims of Wall Street,” is divided into categories such as growth vs. income, gold and silver, long-term investing vs short-term speculating, technical vs. fundamental analysis, insider trading, money managers, etc.

The largest section is on contrarian investing, with 12 pages of quotes!

The quotes above remind me that the demand for my “Maxims” book has been strong during this crisis. Lately, I’ve received several letters from investors who have said that reading quotations from “The Maxims of Wall Street” has been comforting in these trying times when the market is gyrating like crazy. I’ve been around the markets since the 1970s and have witnessed firsthand the thrill of victory and the agony of defeat. It never gets easy.

Kim Githler, president of the MoneyShow, displays dozens of quotes from book each MoneyShow. “It’s my favorite financial book,” she says. 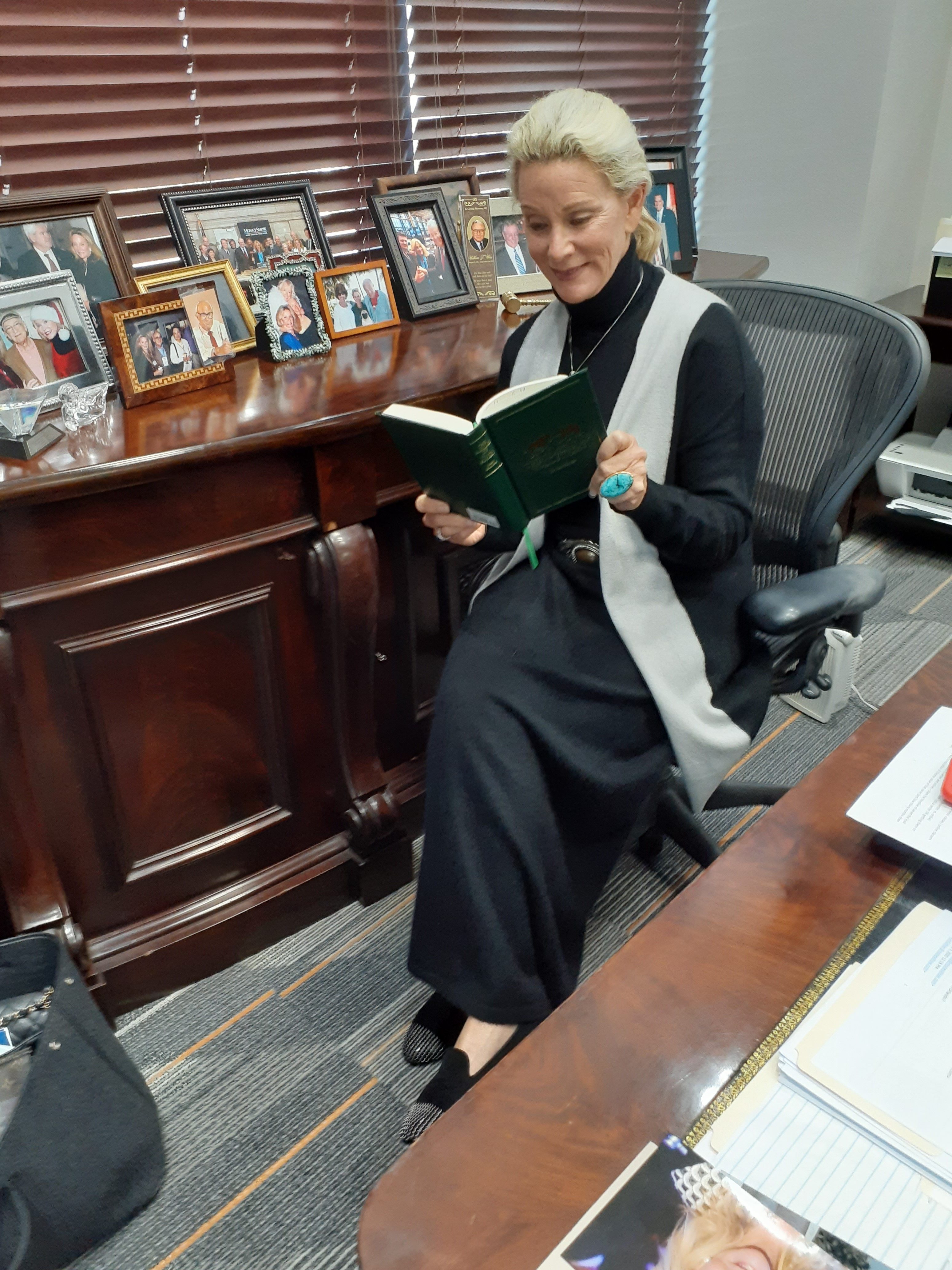 Steve Forbes has said, “Everyone is a disciplined, long term investor… until the market goes down!” (quoted in the “Maxims,” p. 134)

And benefit from this quote by Alex Green: “It’s tough to catch the train after it has left the station.” (p. 176) He considers my book a “classic.”

And last, but not least, Dick Russell offered the famous line, “In a bear market, the winner is he who loses the least.” (p. 109)

You will love this book! If you would like a copy of the new 7th edition, go to www.skousenbooks.com, or call Harold at Ensign Publishing at 1-866-254-2057. You’ll be glad you did. The price is only $20 for the first copy and $10 for all additional copies (they make great gifts). If you buy a box of 32 copies, the price is only $300. As the late businesswoman and financier Hetty Green was famous for saying, “When I see a bargain, I buy a lot of it.”

Just last week, one subscriber bought two boxes — 62 books — to give to friends, relatives and clients.

I know subscribers who have a copy on their nightstand. It is a good source of wisdom for everyone who is staying at home these days. As Dennis Gartman has said, “It’s amazing the wisdom one can gain from just one line in your book. I read it every day.” 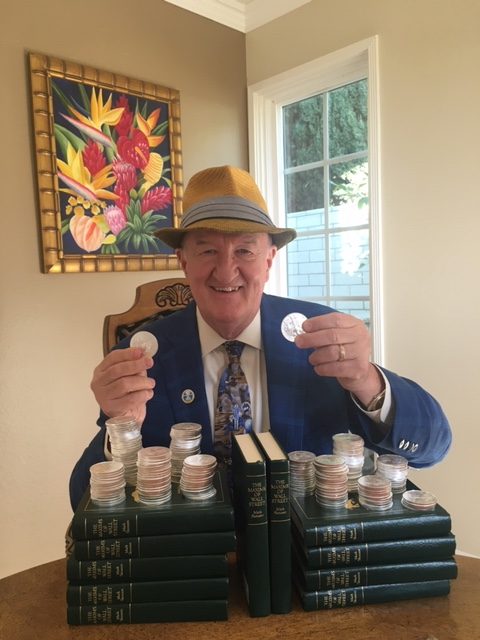 I so enjoyed stacking silver coins on my ‘Maxims’ book!

Mask Hysteria – This is Just the Beginning of the New Dystopia

“More and more, everything is either prohibited or mandated.” – Jorge “Tuto” Quiroga (former president of Bolivia)

The madness continues. Based on misinformation about the lethal nature of the Wuhan, China, coronavirus from Dr. Neil Ferguson (Imperial College London), the South by Southwest Film Festival was cancelled. Then, Stanford University announced that it was closing its campus and sending its students home.

Then all schools closed, even though the evidence that students are less likely to die from the pandemic is overwhelming.

Afterwards, sporting events and concerts were cancelled. Businesses were forced to shut down, and employees were sent home. Unemployment claims skyrocketed.

Government bailouts went through the roof, and so did the deficits.

Then, overweening government officials locked down parks and beaches. Last but not least, the First Amendment and the Bill of Rights are being ignored.

Now, everyone is being told that they are “required” to wear a mask in public or when they enter a grocery store, the post office or a meeting.

This week, all of the major airlines agreed to require that every passenger wear a mask when they fly.

I have a question. How do you eat and drink during a five-hour flight while wearing a mask?

How does law enforcement recognize a criminal or a terrorist in a crowd where people are covering their faces? How can you tell whether a person is smiling or frowning?

What about the studies that have shown that wearing a mask is no guarantee that you will avoid the disease? What about all the germs that accumulate over time from wearing a mask?

Whatever happened to freedom of choice in our once “land of the free”? Why not let individuals decide for themselves whether to wear a mask or not?

Stop telling us what to do!

What has happened to personal freedom in this country? This New York Times story explains the culture war going on over the mask debate:

I see that Sen. Rand Paul, who is a medical doctor, refused to wear a mask on Capitol Hill. He stated, “I have immunity, I’ve already had the virus. I can’t get it again, nor can I transmit it.”

What I fear the most is the “new normal” that’s coming out of this crisis and the permanent changes in our society. We’ve all become germaphobes. We never get our hands dirty. We constantly wipe down everything at home and in the office. We don’t allow our children to play in the backyard or in the park. We wear masks wherever we go. We work at home and engage in “social distancing” at all times.

Watch this short video for my response to those who have demanded that I wear a mask.

Where is CNBC’s Rick Santelli to lead an on-air uprising when we need him?