“Geography makes the United States the most powerful country of all.”

“I, in my own mind, have always thought of America as a place in the divine scheme of things that was set aside as a promised land.”

Geopolitical analysts have recently focused on the importance of geography in determining whether countries are powerful or weak and successes or failures.

Some analysts even so go as far as to say that climate determines economic development. With few exceptions, countries in colder climates perform better than nations in temperate or humid zones.

In the book, “Guns, Germs, and Steel,” published in 1997, Jared Diamond argues that European economic, military, technological and political power came about because of geographical luck, not innate intelligence.

Recently, international strategist Peter Zeihan opined in “The Accidental Superpower” that geography is the main determinant of superpower status. You can buy the book here on Amazon.

In fact, he explains that America’s global economic and military dominance is entirely due to its geographic advantages.

“The United States has the greatest volume and concentration of capital-generating opportunities in the world by an absolutely massive margin,” Zeihan wrote.

–A temperate climate zone for most of the lower 48 states.

–A tremendous variety of natural resources in oil, mining and agriculture.

–Dozens of passes through the Appalachian and Rocky Mountains.

–The largest contiguous stretch of high-quality farmland in the world (the Midwest).

–The world’s greatest river network (the Mississippi and Missouri rivers and the Intracoastal Waterway), allowing capital, agricultural and other goods to be transported to the vast bulk of the American population.

–The most secure region in the world, far removed from Europe and Asia by the Atlantic and Pacific oceans.

–More port potential and deep-water navigation than the rest of the world combined.

The advantages of the USA are so spectacular, it’s hard to imagine describing America as an “accidental” superpower. But that is what Peter Zeihan does.

He writes, “America’s physical place in the world is empowering. With no hostile nations on its borders, no hostile entities capable of bringing mass invasion to its shores, and an economy without peer, the American advantage is absolutely massive.”

The rest of us would like to think that American exceptionalism is due to institutional factors — the entrepreneurial spirit, the “Protestant ethic,” limited constitutional government and a melting pot of immigrants.

Either way, we have much to be grateful for as Americans. As Katherine Lee Bates wrote in “America the Beautiful”:

For amber waves of grain

Above the fruited plain!

God shed His grace on thee,

And crown thy good with brotherhood

From sea to shining sea.”

For whatever reason, the results of American exceptionalism have been largely positive. As I have noted elsewhere, the U.S. stock market has been the best performer over the past 100 years and has performed better than any other stock exchange. We remain 100% invested and are taking full advantage of the Trump administration’s policies that support economic growth.

Here’s an American Success That’s Anything But Accidental…

It’s one of America’s truly great growth stories. It’s also the biggest holding in my personal IRA. Follow this link to hear me explain this monthly dividend-paying phenomenon.

Join Me for the Orlando MoneyShow, February 6-8, 2020, at the Omni Orlando Resort at ChampionsGate. I will be speaking Thursday, Feb. 6, 9:30 a.m. about My Most Important Forecast & Strategy: When Will the Mother of All Bull Markets End? On Feb. 7, I will talk at 5:30 p.m. about The Best Offense Is a Good Defense: How to Beat the Market with My Five Favorite ‘War’ Stocks! Other investment experts who will be speaking include Bob Carlson, Hilary Kramer and Bryan Perry. Register by clicking here or call 1-800-970-4355 and mention my priority code of 049278.

Snoopy Christmas Show Does It Right

Two weeks ago, I complained how The Walt Disney Company’s (NYSE:DIS) animated “Frozen” holiday short film and a children’s book, “What is Christmas?” took Christ out of Christmas.  See the “You Blew it!” column at the end of this article.

Last week, my wife and I went to the “Merry Christmas Snoopy” ice show at Knotts Berry Farm in Southern California, where our daughter, Hayley, is an ice skater. 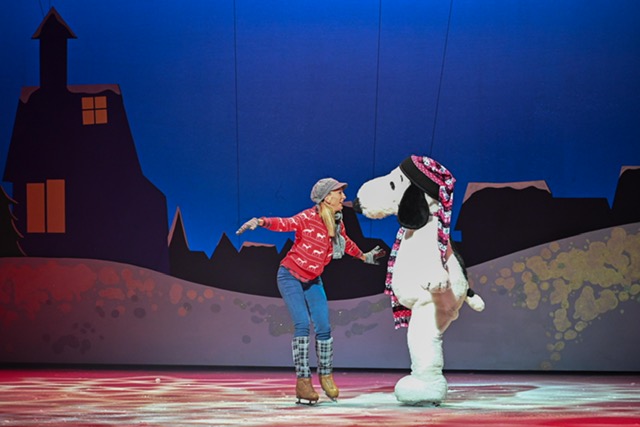 It was a spectacular show, and I highly recommend my subscribers to go the “Merry Christmas Snoopy” ice skating show and see Hayley do a backflip! She performs several times daily from Dec. 20 to Jan. 6, including Saturdays and Sundays. Click here for the details.

Most of the show has one holiday scene after another that shows the wonders of ice skating. However, true to Charles Schultz, the artist/creator of Charlie Brown and Snoopy, near the end of the show, the character Linus delivers a recitation of the true story of Christmas and the birth of Christ in Bethlehem. When I was there, the audience exploded in spontaneous applause after Linus’s discourse. Hayley tells me that happens every time Linus tells the real story of the Nativity.