Will the Stock Market Boom or Collapse Under Biden/Harris?

I gasped when I saw the headline in the Wall Street Journal: “Get Ready for the Biden Stock Boom,” written by Ed Finn, former editor and president of Barron’s.

Bob Bleiberg, the editor of Barron’s before him, must be rolling over in his grave. Finn somehow claims that the market will simply ignore the impact of massive tax increases by Democrats on investors.

“Expect some turbulence, but 15% annual returns are possible even with the threat of higher taxes,” Finn claims.

Finn bases his fanciful claim largely on history — the stock market soared under Bill Clinton and Barack Obama. But both Democratic presidents benefited from an aggressively expansive Federal Reserve policy, the main driver behind a bull market.

Biden wants to tax profits on stocks, bonds, gold, silver and real estate at the same rate as income taxes, up to 39.6% on the federal level, plus the 2.9% payroll tax, on top of state and local income taxes. For some wealthy investors living in New York or California, the capital gains tax will be more than 50%.

Clearly, investors will take notice. Fewer will want to participate in the stock market and will look elsewhere to make money, or simply spend their savings.

Democrats and Republicans Both Violate the Sound Principles of Taxation

We’ve lost the true principle of taxation. In my economic and finance classes at Chapman University and in my textbook, “Economic Logic,” I teach my students the correct theory of taxation and revenue.

The only legitimate rule is the benefit principle — those who benefit should pay, and if you benefit more from the judicial system and society, you should pay more. It is also known as the user pay, or accountability principle.

If individuals and firms benefit from America’s justice system, protection from foreign enemies, or the local police, they should pay for it — equal to the services received.

A gas tax to maintain local roads and build new ones is perfectly legitimate if it used for that purpose. But if the gas tax is used to finance foreign wars, pay for education, or pay down the deficit, it would be illegitimate.

A transaction tax on stocks, bonds and other assets trading on a stock exchange is perfectly fine if it is tied to services provided by the exchange or the government agency assigned to regulate the stock market. But to use it to pay down the deficit or to reduce speculation on Wall Street is totally inappropriate.

Taxes should be a way for individuals or companies to pay for government services or goods rendered. The amount paid should be linked to how much help they get from the government. This is known as the market principle of taxation.

It should not be based on the ability to pay or to maximize revenues (the Laffer curve). It should not be used to penalize the rich or reduce inequality. A progressive tax is anti-market.

The Flat Tax is Ideal

The simplest tax is a flat percentage rate of income, sales or property values. That works, because the more income or wealth you have, the more you should pay. Tithing (10% of income or profits) is a good example of a flat tax. The more you earn, the more you pay. It is easy and not likely to distort economic decision-making.

Certainly taxing 40% to 50% of one’s gains is confiscatory and a clear violation of the benefit principle. Do investors really receive benefits that amount to 40-50% of profits? Clearly not.

“The moment you abandon the cardinal principle of exacting from all individuals the same proportion of their income or their property, you are at sea without rudder or compass, and there is no amount of injustice or folly you may not commit,” McCulloch said. (emphasis added).

As you can tell from the above examples, we have strayed far away from the sound principles of taxation.

Economic Logic: The One and Only No-Compromise Textbook in Free-Market Capitalism

I devote chapter 21 in my textbook “Economic Logic,” to tax policy. Now in its 5th edition and 715 pages long (including an index), “Economic Logic” is a breakthrough course in free-enterprise capitalism. With 28 lessons or chapters based on my 40 years of experience as a business leader, economic analyst, financial advisor and college professor. It is ideal for students or laymen who want to know more about how the economy really works in easy-to-understand language. 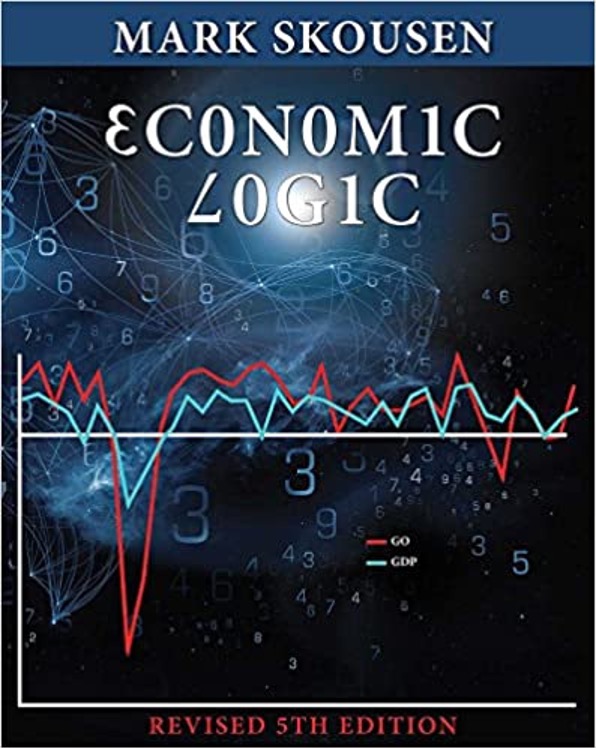 If your child or grandchild is taking economics in college, this book is an ideal supplement to make sure he’s being taught sound economics.

It includes chapters on the stock market, the Federal Reserve, the Austrian theory of the business cycle and a major critique of Keynesian and Marxist economics. Each chapter highlights a major figure in economics, finance or business management.

As one reviewer on Amazon states, “Skousen’s textbook gave me a profound new understanding of real-world economics and personal finance. It is easy to read without any need for math. My college economics courses, filled with perplexing theories like the paradox of thrift, gross domestic product (GDP) and Keynesian fiscal policy, were completely refuted in this excellent free-market textbook.”

“Economic Logic” retails for $48.95, but you pay only $35 postpaid if you order it directly from me. For more information on my textbook, go to http://mskousen.com/economics-books/economic-logic/. To order directly for $35, go to www.skousenbooks.com.

What Will Happen if the Democrats Win in November?

Investors beware! Biden plans to eliminate the special low rate on long-term capital gains, raising it from 23.9% to 39.6%, the same as ordinary income, plus additional payroll and state and local taxes.

Kamala Harris also supports a transaction tax on every sale or purchase of stocks and bonds. This will dry up liquidity and increase the cost of doing business in the stock market.

High-income earners beware! Biden wants to raise taxes on the rich and extend the payroll tax (Social Security and Medicare) to anyone earning more than $400,000 a year, including Sub S corporate income.

Business owners beware! Biden wants to raise the corporate income tax from 21% to 28%.

Heirs beware! Last but not least, the Democratic presidential candidate demands that Congress do away with the “stepped-up basis” in your inheritance. This means you will pay huge taxes on any appreciated assets that you inherit from your parents or grandparents when they die, and you decide to sell.

Put these all together and you have the makings of a bear market on Wall Street.

Of course, Biden & Co. has to pass this new tax legislation in Congress, but it will be easier to do if the Democrats control both the House and the Senate. Pray it doesn’t happen.

The NBA Has Become Political: Who Needs It?

One thing I’ve always enjoyed about professional sports is that I can take a break from politics, business and the markets and just watch a good game on television. That escape no longer exists.

Now, we all are bombarded with messages essentially calling us racist as individuals and as a nation every time we watch sports. “Black Lives Matter” is plastered all over the playing field — the pitcher’s mound in baseball, the end zone in football and the court in basketball.

I started watching an NBA game and noticed that the league has officially endorsed the Black Lives Matter organization, which stands for a lot more than fighting discrimination against blacks. I agree that “black lives matter” in lowercase, but the organization itself goes much further. It supports reparations, welfarism and replacing capitalism with socialism, among other things.

Acton Institute has written an excellent summary of the group’s radical agenda that includes giving all blacks in America a guaranteed minimum income, as well as “free” health care, schooling, food, real estate, gender reassignment surgery and abortions. Black Lives Matter also advocates for an “an end to all jails” as we know them; disruption of the traditional family; support for foreign nations that sponsor or harbor terrorism and a “global liberation movement” that will “overturn” capitalism and alleged U.S. imperialism.

I find it annoying that the NBA and other professional sports have injected politics into every game by having “Black Lives Matter” prominently displayed. As someone who knows what BLM really stands for, I cannot enjoy the game anymore. I’ve stopped watching. How about you?

Reports are coming in that TV ratings for NBA games are falling. The NBA deserves it.

It is time to say “No” to politics in sports.