This Scotsman Made You Rich Beyond Your Wildest Dreams

“There is a Scotsman inside every man.” — Adam Smith

There’s more to a Scotsman than being a thrifty penny-pincher. They are also famous for shrewdly pursing their own self-interest.

As economist Wesley Mitchell, the founder of the prestigious National Bureau of Economic Research (NBER), stated, a Scotsman is “a person who was intent primarily upon pushing his own fortunes and who possessed a high degree of shrewdness in deciding what he could do best.”

That characteristic applies to all of us, whether in business or in our personal life. It’s called looking out for number one.

In 2001, American historian Arthur Herman wrote the book, “How the Scots Invented the Modern World,” emphasizing the impact of the Scottish Enlightenment and how the Scots favored self-government and decentralized decision-making over the monarchy controlling the lives of the people.

For the common people to rule themselves, the Scots supported literacy and book reading, starting with the Bible, and encouraged self-discipline and honesty in business.

‘It All Started With Adam’

The Scot who had the biggest impact on the modern world was a professor of moral philosophy named Adam Smith (1723-1790). Today, he is known as the father of modern economics.

To quote Mitchell again: “Adam Smith did for economics in many ways like what Charles Darwin did for biology… a new framework.”

He started a revolution. As Milton Friedman wrote, “Adam Smith was a radical and a revolutionary in his time — just as those of us who preach laissez faire are in our time.”

What was his revolutionary idea? It was simple, bold and powerful: Individuals are better judges of their own self-interest than any statesman could be. Therefore, individuals will do the best they can if they are left alone by the government.

The best policy for government is to interfere as little as possible with the occupations and investments of its citizens.

In fact, if you want your country to grow the fastest, and for individuals to earn the highest income, let businesses decide to use their labor and capital to their best ability. He called his model “the system of natural liberty.” 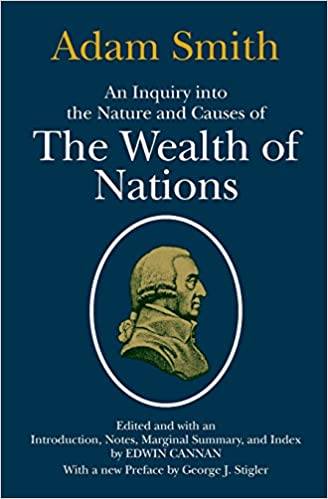 In page after page, Adam Smith lambasted the tedious regulations and rules that the British government had imposed on occupations, businesses and trade, which he called mercantilism.

Smith excited the public because his “system of natural liberty” — what we would call laissez faire today — promised to transform a nation from poverty to “universal opulence which extends itself to the lowest ranks of the people.”

Give them their freedom and they will prosper.

Indeed, that is exactly what happened. Many of the policy recommendations of “The Wealth of Nations” were adopted by nations — free trade, liberal immigration, low taxes, sound money (the gold standard) and patent law.

Here was the result: Shortly after 1776, economic growth took off, and today, we enjoy a dramatically higher standard of living for all of us, rich and poor. 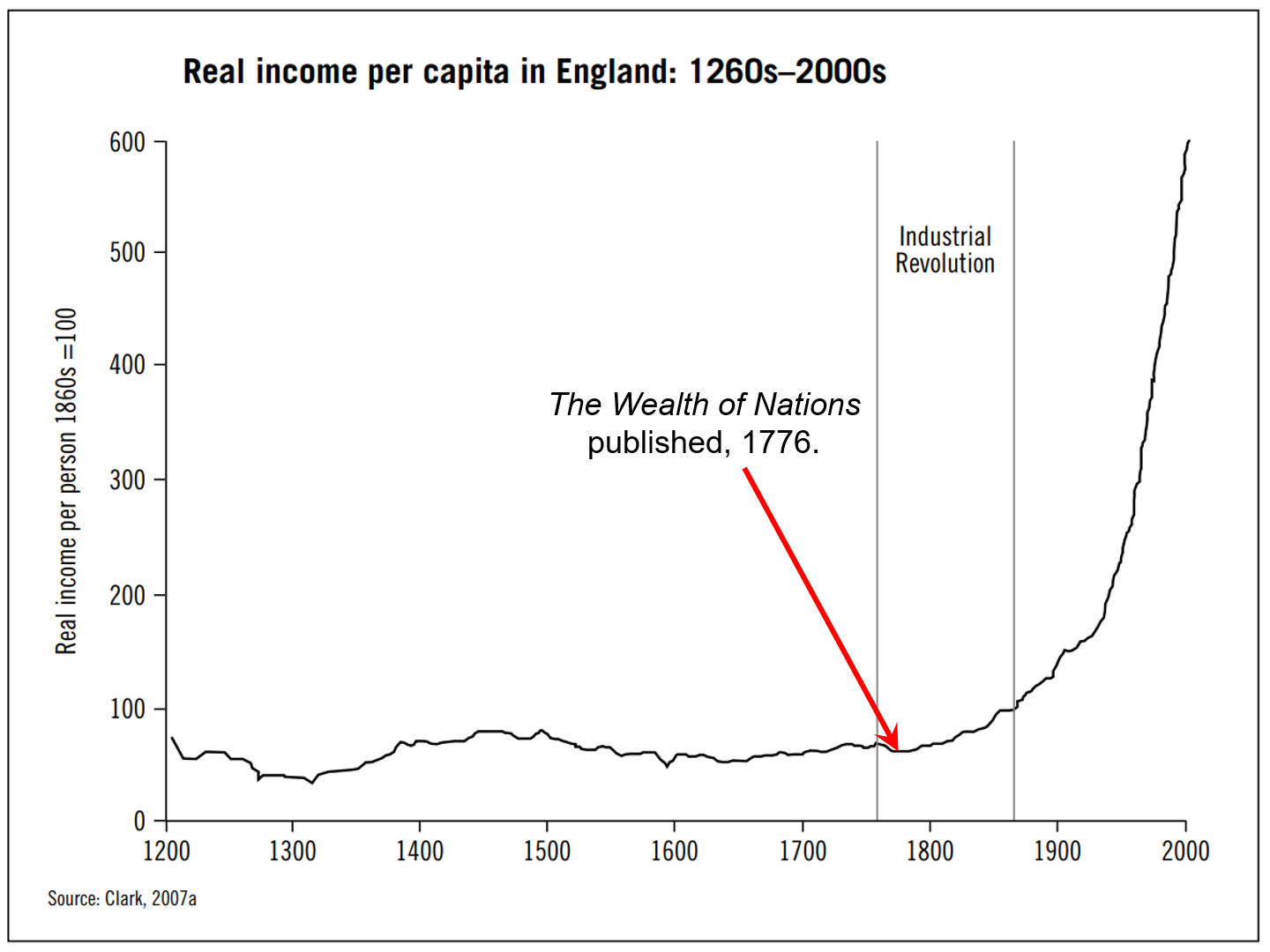 Chapman University has a statue of Adam Smith on campus. My students and I gathered around it at the end of the semester to pay tribute to him. I was at the dedication of the Adam Smith statue in Edinburgh in 2007. Years ago, I commissioned the Totem Pole of Economics. Adam Smith is on top, ahead of Keynes and Marx.

How Adam Smith Became the Hero in my Book

Several weeks ago, I told the story of how Adam Smith became the hero of my book, “The Making of Modern Economics.” You can read it here.

Happily, the first edition of my book turned out to be published appropriately on March 9, 2001 — the exact anniversary of the date (March 9, 1776) that Adam Smith’s first edition of “The Wealth of Nations” was published in London!

Like Adam Smith’s “Wealth of Nations,” my history is revolutionary. For the first time, the history of economics could be told as a bona fide story and as a bold plot with Adam Smith and his “system of natural liberty” as the heroic figure, and all economists could be judged as either for or against the invisible hand doctrine of Adam Smith.

Smith was often attacked viciously by the Marxists, Keynesians and socialists, and was sometimes left for dead… only to be resuscitated by his followers, the French Laissez-Faire School, the Austrians and the Chicagoans.

It even had a good ending, with the collapse of the socialist central planning model in the early 1990s and the triumph of free-market capitalism.

I wrote the book to be both entertaining and educational.

It includes over 100 illustrations, portraits, photographs and “tell all” biographies.

–  Does capitalism encourage or moderate greed? The surprising answer from Adam Smith.

– How Keynes saved capitalism — from Marxism!

– A devastating critique of Karl Marx’s theories of capitalism, labor, imperialism and exploitation. (This chapter alone has converted many Marxists into free-market advocates.)

– Five chapters on the Austrian and Chicago schools of free-market economics.

The new fourth edition (published in 2022) updates the dramatic story with the challenges of modern monetary theory, the COVID-19 pandemic, climate change, minimum wage debates, the new socialists and more.

The book is award-winning. It has won the Choice Book Award for Academic Excellence, and it was ranked the Second Best Libertarian Books in Economics by the Ayn Rand Institute (behind Henry Hazlitt’s “Economics in One Lesson”).

Over the years, I’ve received numerous testimonials of the book. Here’s the latest by columnist Richard Rahn in the Washington Times:

“Mark Skousen has produced the single best book on virtually all of those who have had a significant impact in economics — for good or bad — regardless of their political leanings. Despite being an economist with a definite political viewpoint, he treats the many figures he covers with considerable fairness — even the bad actors.  It’s a delight to read cover-to-cover.”

Of course, not everyone agrees. My book has been banned, censored and blacklisted by Marxists, Keynesians and even some Austrians. It was also called “both fascinating and infuriating” by Foreign Affairs magazine.

Order the book and decide for yourself.

Routledge charges $54.95, plus shipping, but you can buy it directly from the author for only $35. Each copy is autographed, dated and mailed for no extra charge if mailed inside the United States.

To buy a copy of the book, go to www.skousenbooks.com. 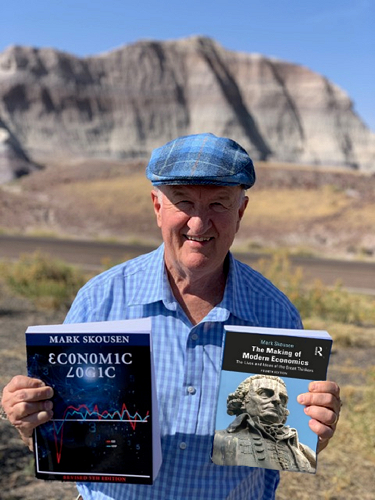 You might also check out my guidebook, “Economic Logic,” now in its fifth edition. In 28 chapters, it is a one-volume study of sound economics that will help you in your business and policy debates. In each chapter, I highlight my favorite economist. Chapter one starts with… you guessed it:  Adam Smith!

The excitement is building for our July 13-16 intellectual feast in Las Vegas.

NEW! Our incredible schedule with over 200 sessions and 280 speakers for FreedomFest has just been posted here. To get $50 off the registration fee, see below. In addition, here is a sampling of events that we will be hosting this year.

Wednesday, July 13, 1:00-1:50 p.m. Jim Woods, co-editor of Fast Money Alert, on “My Favorite Technique to Make Money,” followed by a discussion with the legendary Jim Rogers on “Which Offers a Better Investment Opportunity, the USA or Emerging Markets?” Moderated by Roger Michalski.

Wednesday, 2:00-2:25 p.m. Alex Green (Oxford Club) on “Creating a Permanent Portfolio: Can You Beat the Market Without Trading?”

Wednesday, 2:25-2:50 p.m. My big debate with technical trader Mike Turner: “Buy and Hold vs. Market Timing: Which is the Most Profitable Investment Strategy During a Bear Market?”

Wednesday, 3-3:50 p.m. “Is Your Boss Ruthless or Compassionate? How the New Model of Capitalism Can Defeat Socialism and Marxism.” The evolution of business, from robber barons to compassionate capitalists: Andrew Carnegie and the Homestead Strike of 1892; Henry Ford’s $5-a-day in 1914; Jack Welch’s case of Ruthless Capitalism 1981-2001; and John Mackey’s “Conscious Capitalism” in 2014.

On the evening of July 13, we have our “Opening Ceremonies,” with Lisa Kennedy, host of Fox Business, as our Mistress of Ceremonies all four days. Keynotes include Steve Forbes on his new book, “Inflation and How to Fix it,” Connor Boyack on “How CNN’s Attack on The Tuttle Twins Backfired and Helped Sell 100,000 Books to Teach Kids About Freedom,” and Dog the Bounty Hunter (new!) on “What Being Cancelled Taught Me.” Followed by the opening cocktail party in our exhibit hall, “the trade show for liberty,” with 180 exhibitors; plus Peter Studabaker will perform as our fun libertarian magician.

It will be followed by the big debate: “Ben Stein vs. Art Laffer: Should We Raise Taxes on the Rich?” Ben Stein will also be our luncheon speaker: “Rich & Famous: My Life in Beverly Hills & Hollywood.”

Thursday, 6:45-7:00 p.m. Betsy Devos, former Secretary of Education, on “Hostages No More: The Fight for Education Freedom and the Future of the American Child.”

Friday, 7:30-8:45 a.m. Breakfast with Mark Skousen and Steve Forbes: “The Future of American Exceptionalism and the China Threat: What Will it Take to Remain the #1 Superpower?”

Friday 3:10-4:00 p.m. “The Ultimate Bitcoin Debate: Is Crypto the biggest Ponzi scheme since the dot.com era?” John Mackey and Alex Green (yes) vs. Max Borders and Brian Robertson (no).

Saturday, 11-11:50 a.m. Big Debate: “Election Chaos: Was the 2020 Election Stolen From Trump and Should 2024 Be His Year?” with Wayne Allyn Root vs journalist Isaac Saul, with John Fund (National Review) as moderator. The sparks will fly.

Saturday 4:00-4:50 p.m. “Beyond Wealth: How to Think, Act and Live Like a Renaissance Man” with Jim Woods, Alex Green and Mark Skousen. Nice way to end the conference!

Register This Week and Get $50 Off

Hurry, our room block at the Mirage Hotel & Casino is almost full, and the Treasure Island hotel next door is filling up fast.

To register, go to www.freedomfest.com, and use the code EAGLE to get $50 off the registration fee. If you have any questions about FreedomFest, email Hayley at hayley@freedomfest.com.

Time to Throw the Bums Out

The June 7 primary elections in California and other states have set the tone for the November elections. Radical Democrats who call themselves “progressives” are anything but.

San Francisco District Attorney Chesa Boudin was elected in 2019, when he crusaded against the “two systems of justice,” one for the wealthy and one for everybody else. He also advocated lesser sentences or no prison for many convicts.

As crime, homelessness, drug use and untreated mental illness on the city’s streets worsened, the voters of San Francisco said enough is enough and recalled Boudin by a heavy margin.

I won’t even step foot in San Francisco, a city I used to love to visit, because of the crime and beggars on the street.

It won’t be long before they recall other “woke” officials in California. In Los Angeles, the district attorney arranged for a sentence of only six months to a juvenile facility to a 16-year-old who ran over a mother and her baby in a stolen car last year.

In the Los Angeles mayor’s race, developer Rick Caruso, a former Republican who switched to the Democratic Party, ran as a tough-on-crime candidate, vowing to put 1,500 new cops on the beat. His main opponent, Rep. Karen Bass, ran on her record as a prominent Democrat and years of outreach to Los Angeles’s minority communities. Caruso won 42% of the vote versus Bass’s 37%. There will be a runoff in November.