“Most people are beaten up by the market instead of beating the market.” — Mark T. Hebner (“Maxims of Wall Street,” p. 194)

What event signifies the greatest breakthrough in Wall Street history?

The last three all took place in the mid-1970s, in the midst of inflationary times. In many ways, the 1970s were a major financial revolution.

And I was in the middle of it, starting my career in the world of high finance.

And the Winner is…

In many ways, the creation of the first retail index fund, the Vanguard S&P 500 Index Fund, was the most important event of the past 100 years on Wall Street.

Why? Because it is the most successful investment vehicle ever. The two largest money managers in the country are Jack Bogle’s Vanguard Group and Larry Fink’s BlackRock. Both specialize by investing in mutual funds and exchange-traded funds (ETFs).

I just finished reading the fascinating story of index funds and exchange-traded funds.

The book is called “Trillions: How a Band of Wall Street Renegades Invented the Index Fund and Changed Finance Forever.” It is written by Robin Wigglesworth, a writer for the Financial Times. It is a remarkable story worth reading. You can buy it here from Amazon.

In reading, I was amazed how many of the people who are mentioned in the book that I’ve met over the years, including Warren Buffett, Jack Bogle, Burt Malkiel, Paul A. Samuelson, Charles Schwab, Jeremy Siegel and Harry Markowitz.

Index Funds: From Zero to Hero

The first S&P 500 Index fund hardly got off the ground. First, it was created and sold to institutions, and it was not very popular. Most Wall Street firms considered it an insult to their skills in beating the market.

But when study after study showed that the vast majority of brokers, mutual funds and money managers could not consistently beat the market over long periods, suddenly the index funds looked more appealing.

As Robert R. Julian observed, “In the world of investing, being average means you are one of the best students in the class.” (Maxims, p. 193)

Charles Ellis made this point in his book, “The Loser’s Game.” He said, “Investment managers are not beating the market. The market is beating them.” (p. 193) 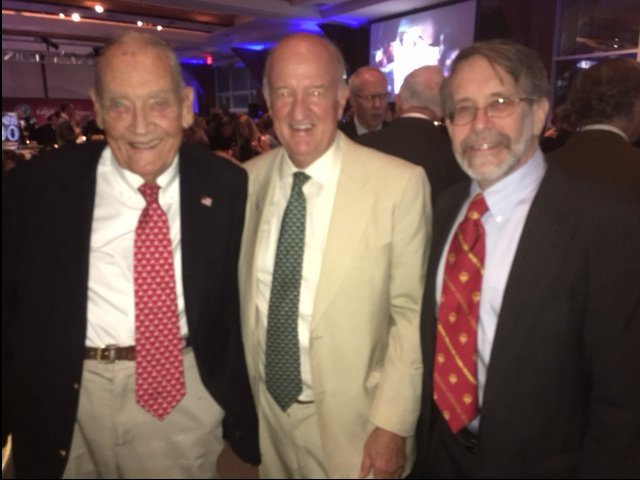 Meeting the legend Jack Bogle and Forbes Editor Bill Baldwin at the Forbes 100 anniversary in New York City in 2017.

The real breakthrough came in 1975, when Jack Bogle came up with the no-load Vanguard 500 Index Fund, which reflected the rise and fall of the S&P 500. After a modest rise, it became one of the largest no-load funds in the country, valued at over $850 billion. It has an average annual return of 10% since its inception.

That’s hard to beat, since most actively managed funds have higher administrative costs, pay more in taxes and are never fully invested.

The index fund is like the rejected stone that became the chief cornerstone, as the Bible says (Psalms 118:22, Acts 4:11).

Warren Buffett Beat the Market… Until He Didn’t

“Trillions” starts with a famous bet that Warren Buffett made against a hedge fund guru in 2008. Buffett bet that no hedge fund could beat the stock indexes over a 10-year period, not even his own company Berkshire Hathaway.

He won the bet easily. 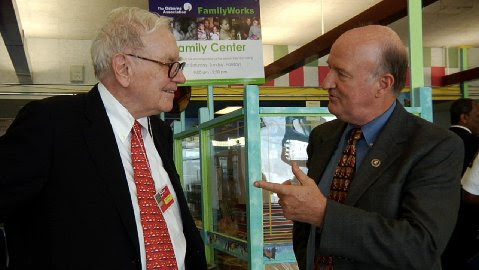 Notice that I’m giving advice to the world’s most successful investor.

It is true that recently Warren Buffett has become a believer in the efficient market theory (EMT) and that index funds are a better deal than his own Berkshire Hathaway fund. Index funds have beaten Berkshire for over 10 years now.

But that wasn’t always the case. When his fund was much smaller, he felt he could take advantage of the occasional inefficiencies in the market, and thereby handily beat the market.

Here is what he wrote in the 1988 shareholder report:

“The continuous 63-year arbitrage experience of Graham-Newman Corp., Buffett Partnership, and Berkshire illustrates just how foolish EMT is. While at Graham-Newman, I made a study of its earnings from arbitrage during the entire 1926-1956 lifespan of the company.  Unleveraged returns averaged 20% per year. Starting in 1956, I applied Ben Graham’s arbitrage principles, first at Buffett Partnership and then Berkshire. Though I’ve not made an exact calculation I have done enough work to know that the 1956-1988 returns averaged well over 20%.

“Over the 63 years, the general market delivered just under a 10% annual return, including dividends. That means $1,000 would have grown to $405,000 if all income had been reinvested. A 20% rate of return, however, would have produced $97 million. That strikes us as a statistically significant differential might, conceivably, arouse one’s curiosity.”

Buffett did not suggest at the time that making 20% a year in arbitrage techniques is easy. But he claimed that inefficient situations do occur from time to time, and smart investors like himself can take advantage. According to Buffett, the problem with the EMT is that it always assumes efficiency.

“Observing correctly that the market is frequently efficient, they went on to conclude that it was always efficient,” Buffett wrote. “The difference between these propositions is night and day.”

The idea that Buffett’s success for 63 years was just luck is highly suspect. We’re talking here about thousands of buy-and-sell decisions. The same applies to Peter Lynch’s approach to invest in the Magellan Fund over a 15-year period. Luck can be the case when there may be several dozen buy-and-sell decisions, but when you are making thousands using a specific strategy, it’s more skill than luck if you are consistently beating the market. The strategy cannot be too popular, however. It has to be a bit of a contrarian strategy to be successful. And that’s rare.

It’s difficult to beat the market consistently, but that’s not to say it can’t be done. Occasionally, there are entrepreneurs who, over time, outperform.

One of those is Ron Baron, the CEO of the Baron group of no-load funds. We’ve been recommending two of them in Forecasts & Strategies and have done well. One of his funds was ranked #1 over the past 20 years among thousands of mutual funds.

Ron’s secret is to find top managers. His motto is, “We invest in people, not businesses.” (Maxims, p. 70) 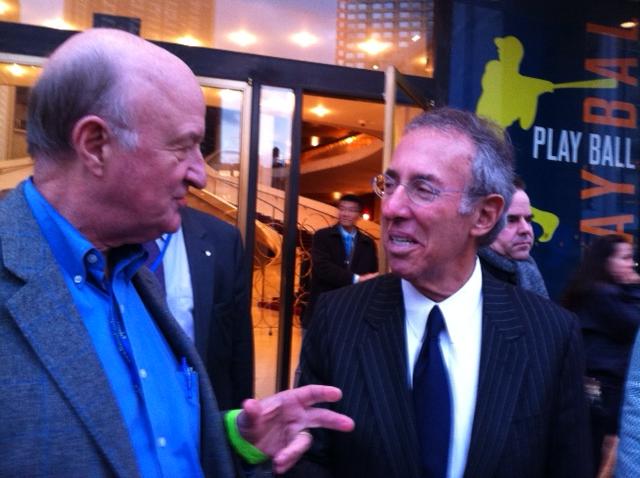 One of Baron’s favorite business managers is Elon Musk, CEO of Tesla and SpaceX. Baron regards Musk as “the most accomplished and consequential engineer on our planet.”

According to a recent survey published in Science Times, Tesla and SpaceX were ranked as “the most attractive firms for leading engineering students (to seek employment) in the U.S.” That survey reports “the electric car company topped the list and the private space company ranked second.”

Baron is still bullish on both. He stated, “We expect Tesla and SpaceX to each become substantially larger, more profitable and much more valuable during the next 10 years.”

I began this Skousen CAFÉ with a list of breakthroughs in the investment world.

I believe I have contributed to this list of breakthroughs by compiling and editing all the great financial proverbs and sayings into one book. The result is the publication of “The Maxims of Wall Street,” the FIRST AND ONLY compendium of all the financial adages, ancient proverbs and worldly wisdom of the investment gurus.

As Jack Bogle himself wrote me, “What a treat! It’s great to have all these quotes in a single spot.”

I list them in some 50 categories, such as “fear and greed”… “risk and reward”…. “predicting the future”… “humility and vanity”… “financial privacy”… “diversification vs concentration”… “worrying about losses”… “market timing”…“missed investment opportunities”… “dividends and income investing”… “value vs. growth”… “penny stocks and gold bugs”… “when to sell”… and “making it big on Wall Street.”

It includes lots of stories by Bernard Baruch, Joe Kennedy, Jesse Livermore and the “Rich Man’s Pearls of Wisdom.”

The “Maxims” has been a big success, with over 40,000 copies sold. I just updated the 10th anniversary edition, hot off the press for the new year. 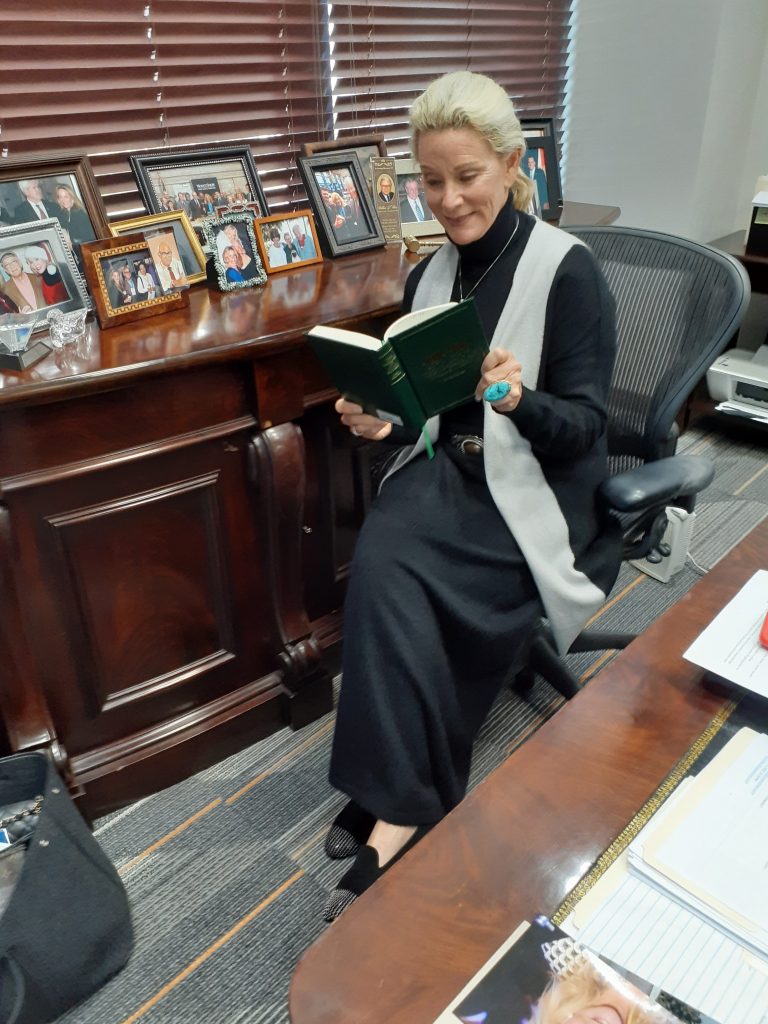 What’s new? I tell the story “A Young Widow’s Lazy Way to Riches.”

A young widow inherited a lot of securities from her deceased husband. Not knowing anything about finance, she took a very simple approach to this newfound wealth. She kept only those stocks that continued to send her regular dividend checks and sold any stocks which omitted dividends, or which didn’t pay any dividends at all. Over the years, her wealth increased dramatically, and she died a wealthy woman.

Here’s a couple of other great quotes just added to the second printing:

“If you mix your politics with your investment decisions, you’re making a big mistake.” — Warren Buffett (p. 149)

“The first rule of racing is to break off the rearview mirror.” — Italian racecar driver (p. 64)

There are many others that have been added to this edition.

“Maxims” has been endorsed by Warren Buffett, Jack Bogle, Alex Green, Barron’s and many others. Kim Githler, the president of the MoneyShows, says: “It’s my favorite book. Every quote is a lesson in finance.”

Dennis Gartman, the editor of the Gartman Letter, says it best: “It’s amazing the depth of wisdom one can find in just or two lines from your book. I have it on my desk and refer to it daily.”

Half Off If You Order More than One Copy

I autograph, date and number each copy. To order your copies now, go to www.skousenbooks.com. The price is $20 for the first copy, and all additional copies are $10 each. They make a great gift for investors, clients, friends and relatives.

I pay all postage if the books are mailed inside the United States.

Start the new year off with a fresh copy of “The Maxims of Wall Street.” You’ll be glad you did.

You Nailed It! Finally, a Government Cares about the Health of Its Citizens During the COVID-19 Pandemic

“This is exactly what U.S. should be doing.” — Steve Moore, Committee to Unleash Prosperity

El Salvador is our savior! It is making headlines for adopting Bitcoin as its official currency.

And now it has started a campaign in favor of healthy living instead of just focusing on the symptoms of COVID-19 (wearing masks and getting vaccinated).

It is about time a nation came out with a new ad campaign in favor of having a heathy diet, getting plenty of exercise and sleep and avoiding stress through yoga or reading a book. Wearing masks and getting vaccinated only deal with the symptoms. Watch the one-minute video here: https://www.youtube.com/watch?v=dv1zK521oVM.

Wearing masks and taking the shots are short-term solutions, but they don’t change the fact that over 70% of Americans are overweight, and way too many suffer from heart disease, diabetes, cancer and strokes, all preventable if we adopted a healthy living lifestyle.