The #1 Question I am Asked on Thanksgiving Day

Thanksgiving is my favorite holiday. It is a time to relax, play a little football with family and friends, enjoy a sumptuous turkey dinner and not worry about gift-giving.

It is also a time to express gratitude to the good Lord for our blessings and challenges during the year. And boy, 2021 has been tough for many of us who have lost loved ones due to COVID-19, lost our job or income, or suffered another disaster.

In my own case, I suffered a serious accident in May when my electric bike suddenly lost its brakes, and I slammed into a barrier going downhill. I was taken to the hospital, where the doctor confirmed that I had broken my wrist; my bloody hand took dozens of stitches. After months of hand therapy, I’m still struggling to play basketball, tennis and golf. Fortunately, I’m left-handed, so the injury to my right hand was bearable.

I also got vaccinated and still suffered from a serious case of COVID-19. I was wiped out for weeks, had a hard time breathing and lost my appetite. Luckily, I was able to write my newsletter, and friends and staff helped me write my trading services. I lost 15 pounds. Fortunately, I have now fully recovered.

Turn on the news and all you see is bad news — rising crime, a higher cost of living, supply chain shortages, the never-ending pandemic and growing restrictions on our freedoms.

Which brings me to the headline, the #1 question people ask me: “With so much bad news going on, how can you remain so upbeat and optimistic?”

My answer comes from one of the maxims of Wall Street by the late Robert Kinsman, “There’s always a bull market somewhere.” (p. 109)

I always counter the bad news with the good news out there. I survived COVID-19 and a major bike accident… FreedomFest, my annual conference, was a huge success, with a record turnout in South Dakota… My wife and family are doing well… and I continue to enjoy staying in touch with friends from around the world.

Why is the Stock Market So High?

Given all the negative news, the stock market is near its all-time highs. How is this possible? As the old saying goes, “Bull markets climb a wall of worry.”

Wall Street likes gridlock in Washington. So far, the worst of the Biden tax-and-spend agenda has failed to pass Congress. The Republicans are likely to take over both the House and the Senate next year. Florida Gov. Ron DeSantis is leading in the polls to be the next president of the United States. (See betting on political outcomes at www.electionbettingodds.com).

I like the attitude of investment guru David Tepper: “The end is not nigh: people and markets adapt to even the worst circumstances.” (p. 111)

And John Templeton: “If you are a long-term investor, you will view a bear market as an opportunity to make money.” (p. 110)

For over 10 years, my wife Jo Ann taught English at Sing Sing Correctional Facility, the notorious prison in New York state. Here is a story she wrote about her experience there one Thanksgiving:

On the Inside: A Most Unusual Thanksgiving 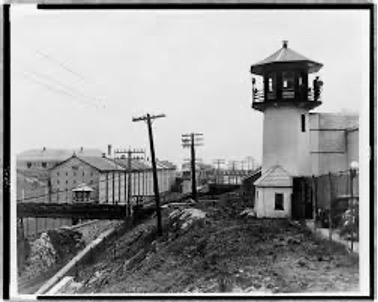 Every Monday and Wednesday for over 10 years, I drove up the river from my home just north of Manhattan to Ossining, where I parked my car in an upper lot and hiked down 114 uneven stone steps (yes, I’ve counted them) to Sing Sing, the notorious maximum-security prison where I taught college and pre-college courses to the inmates. I checked in at noon for my 1:00-3:00 p.m. class, hiked back up to the lot for my two-hour break at 3:30 p.m. and then returned at 5:30 p.m. for my 6:30 -8:30 p.m. class. Working with these students was a labor of love and the best part of my week.

The hardest part of teaching at Sing Sing wasn’t dealing with the security guards, or those stairs, or the oppressive heat from the radiators or the faint odor of mold that permeated the air and clung to my students’ papers. It was figuring out where to eat between classes. Ossining is a small village on the Hudson River, and dining options are limited. It has several convenience-store delis, a couple of Chinese take-outs, a few nice restaurants that don’t open until dinnertime, a McDonald’s and a diner. I usually opted for one of the latter two, where I could sit at a table and grade papers.

But I never complained about the inconvenience. At Sing Sing, the students have only two choices: eat it or leave it. Mostly they leave it and cook their own meals from foods they purchase in the prison commissary. 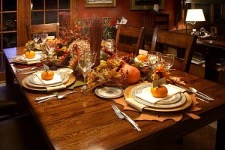 As class ended on the Wednesday before Thanksgiving one year, the men asked what I would be doing for the holiday. Our children live in five different states, and none could share the holiday with us. So, we had invited several friends and their families to join us instead. I started to describe the meal I would be preparing — the turkey, the yam soufflé, my secret cranberry sauce, the homemade rolls and pies — and then I stopped myself.

“I’m so sorry! This is kind of painful, isn’t it?” I sympathized. “You’ll probably get a gray slab of processed turkey product tomorrow.” (Once I asked the men what the food is like in the mess hall, and they responded simply, “Gray.”)

But the men quickly corrected me. “We’re having a great meal!” Dan announced. “I bought a six-pound turkey breast in the commissary.” He pointed to his buddy in the next seat. “He’s making a green bean casserole. My other buddy is bringing yams with marshmallows.”

Another classmate chimed in, “I’m bringing the dessert!”

“We got six guys coming to my cell for dinner!” Dan beamed.

Holidays can be the loneliest time inside. Family members will usually try to visit the week before or the week after, but they spend the holiday itself with family — at home, on the outside. 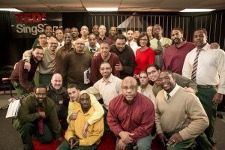 The author celebrates with her students after TEDx Sing Sing. (Photo by Babita Patel/Hudson Link for Higher Education in Prison)

Nevertheless, in the gray cells of a gray prison on a gray November day, these men have learned how to bring light into their lives, simply by breaking bread — and turkey — together. As each of my guests entered my home that Thanksgiving, one bringing green beans, another bringing a salad, another bringing dessert, I thought of Blaze and Sha and Julio — and Dan, beaming over his six-pound turkey breast.

Friends are family we choose for ourselves. I am grateful to call these special students my friends. And I am eternally grateful for the light they bring into my life. 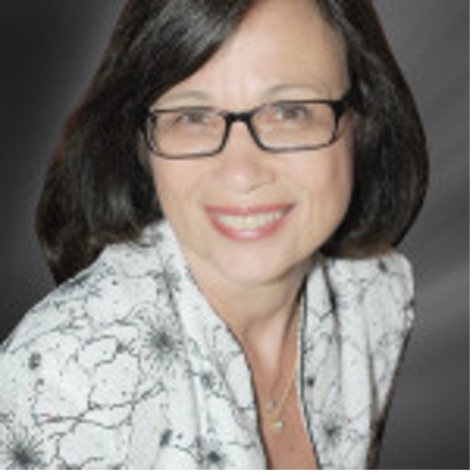 Jo Ann is associate editor of Forecasts & Strategies and now teaches English literature and poetry at Chapman University in Southern California. She misses her students at Sing Sing.

She is also the author of Matriarchs of the Messiah: Valiant Women in the Lineage of Jesus Christ. It tells the stories of the remarkable and heroic women who are identified in the Bible as direct ancestors of Jesus, including Eve, Sarah, Rebekah, Rahab and Bathsheba. She makes the point that the God of Abraham, Isaac and Jacob is also the God of Sara, Rebekah and Leah.

Her book makes a great holiday gift. You can purchase an autographed copy for only $19 postpaid by going to www.skousenbooks.com.

Thanksgiving Day in 1918 was special. Only two weeks earlier, on Nov. 11, the peace treaty was signed that ended World War I.

In honor of the end of that bloody, horrific “war to end all wars,” the American soldiers gathered to celebrate peace. Thousands of happy soldiers assembled in a large hall, with high-ranking military officials joining them on a grandstand. The services were conducted by the army chaplains, representing all the Christian and Jewish faiths.

Elder B. H. Roberts was a Mormon chaplain in the U. S. Armed Forces during the war but was relegated to the rear seats. He had not been asked to participate in the program.

When the program began, he suddenly heard his name. With great surprise, the chaplain in charge announced: “Elder Roberts, the Mormon chaplain from Utah, will now step forward and read the Thanksgiving Psalm.”

The only problem was that Elder Roberts had never heard of the Thanksgiving Psalm. Nevertheless, with courage and possible embarrassment, he arose and walked slowly to the podium, not knowing what he should say.

He later recalled that, during the long walk to the front, he distinctly heard an audible voice behind him: “Read the 100th Psalm.” He looked around but could see no one in particular.

Elder Roberts rose to the podium and faced the crowd, paused, then opened his Bible and read Psalm 100.

After he closed his Bible and was returning to his seat, he noticed that his fellow chaplains refused to look at him; their eyes were staring at the floor. He then realized that they had played a trick on him and tried to embarrass him.

When he returned to his tent that evening, he looked through the Book of Psalms and discovered that Psalm 100 is indeed the Thanksgiving Psalm.

1. Make a joyful noise unto the Lord, all ye lands.

2. Serve the Lord with gladness: come before his presence with singing

3. Know ye that the Lord he is God: it is he that hath made us, and not we ourselves; we are his people, and the sheep of his pasture.

4. Enter into his gates with thanksgiving, and into his courts with praise: be thankful unto him, and bless his name.

5. For the Lord is good; his mercy is everlasting; and his truth endureth to all generations.