“I, in my own mind, have always thought of America as a place in the divine scheme of things that was set aside as a Promised Land.” — Ronald Reagan

This weekend Jews and Christians celebrate together their two most important holy days: Passover and Easter.

In honor of this event, last Saturday I spoke at the Los Angeles chapter of the American Association of Individual Investors (AAII) on the topic, “Ye Shall Prosper in the Land: Three Financial Lessons from the Bible.” 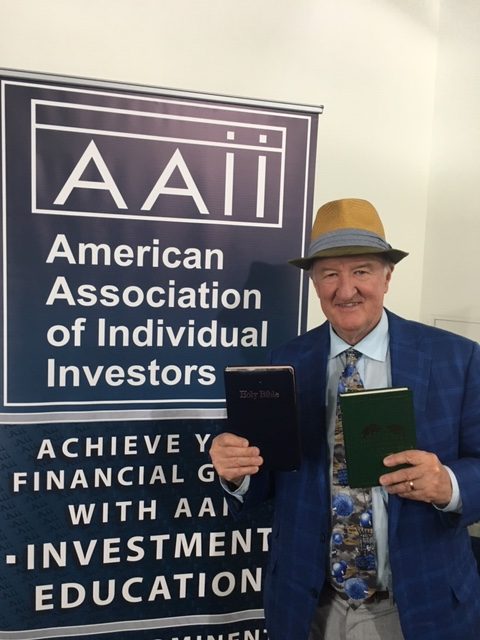 Your editor is holding the Holy Bible and the “Maxims of Wall Street” at AAII meeting at Skirball Center, Los Angeles

While the Old Testament is Pro-Wealth…

I began my financial sermon by noting how “Jews don’t feel guilty about money but Christians do,” to quote Rabbi Daniel Lapin, who spoke on this standing-room-only (SRO) topic a few years ago at FreedomFest.

He pointed out that most of the Old Testament is pro-wealth, noting that Abraham was blessed profusely both spiritually and materially by God, “Because Abraham obeyed my voice, and kept my charge, my commandments, my statutes, and my laws,” (Genesis 26:5).

Benjamin Franklin’s favorite verse in the Bible said, “See a man diligent in his business? He shall stand before kings,” (Proverbs 22:29). And he did!

The New Testament in Anti-Wealth…

However, the Bible’s verses go from pro-wealth to anti-wealth in the New Testament.

Jesus told the young rich man, “If you will be perfect, go and sell all that you have, give it to the poor, and you shall have treasure in heaven: and come and follow me.”

But the young millennial had great possessions and declined to follow Christ. Afterwards, Jesus told his disciples that “truly it is hard for the rich to enter the kingdom of God,” (Matthew 19:21-22).

Later, Paul the Apostle regaled against wealth by declaring, “For the love of money is the root of all evil: which while some coveted after, they have erred from the faith, and pierced themselves through with many sorrows,” (1 Timothy 6:8-10).

Then John Wesley Gave his ‘Sermon on Wealth’

Until the 18th century, Christian preachers — from St. Augustine to Martin Luther — promised rewards in Heaven, not on earth.

That all changed when John Wesley, the itinerant Methodist preacher, gave his revolutionary “Sermon on Wealth” in 1743. He identified three grand principles of success in this life:

Historians note that the Methodists became the richest group in Europe and America during the 19th century because they were famous for making a lot of money, spending very little, and giving to good causes.

Ben Franklin followed in suit by writing his pamphlet, “The Way to Wealth” in 1759, by emphasizing three grand virtues: industry, thrift and prudence.

The Promised Land and American Exceptionalism

Perhaps no other country is more religious and more prosperous than the United States of America. President Ronald Reagan recognized this when he declared, “I, in my own mind, have always thought of America as a place in the divine scheme of things that was set aside as a Promised Land.”

He added, “Any person with the courage, with the desire to tear up their roots, to strive for freedom, to attempt and dare to live in a strange and foreign place, to travel halfway across the world was welcome here.” My, have things changed in 30 years!

There’s no better proof of the American success story and the American dream than the performance of the U.S. stock market. It has outperformed all other nations in the 20th century, as the chart below demonstrates. 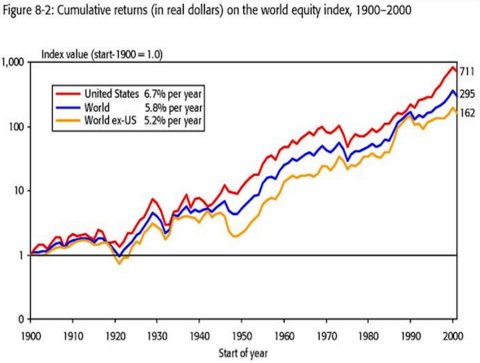 This trend continued after the financial crisis of 2008. See this chart:

There’s nothing automatic in America’s exceptionalism. As long as America enjoys a free-enterprise capitalist system and opens its doors to entrepreneurs from around the world, we will continue to outperform economically and financially.

But if we adopt democratic socialism that is being advocated by many prominent Democrats these days (free college tuition, Medicare for All, minimum wage legislation, etc.), I can envision a time when bull markets turn into bear markets and economic growth turns into secular stagnation.

As one attendee put it at the AAII meeting, “Socialism is a disease, and must be dealt with like any disease — it must be destroyed before it destroys us.”

The Ultimate Financial Bible: “The Maxims of Wall Street”

After my talk, I sold a box of my bestseller “The Maxims of Wall Street,” which commodity guru Dennis Gartman calls “a classic….the ultimate financial bible. It’s amazing the depth of wisdom one can find in just one or two lines from your book.”

I have only one box left of the 5th edition! If you would like an autographed copy, the price is only $20 for the first book, and all additional copies only $10 (it makes a great gift). Call Harold at Ensign Publishing, 1-866-254-2057, or go online at www.skousenbooks.com.

Las Vegas MoneyShow, May 13-15, Bally’s Resort: I’ll be moderating a main stage panel on “Where to Invest Next,” followed by two works on “My Most Successful Money-Making Strategy” and “When Will the Mother of All Bull Markets End?” Other speakers include Keith Fitz-Gerald, John Buckingham, Louis Navellier, Wayne Allyn Root, Brien Lundin and CNBC’s Jon Najarian (Fast Money). Tickets are free, but you must click here to register. Use code 047455.

Should five per cent appear too small
Be thankful I don’t take it all.

There’s a growing movement to sharply increase progressive taxation and eschew the tax cut fever of the past few years provided by President Trump’s tax cut.

Both Senator Bernie Sanders and Congresswoman Alexandria Ocasio-Cortez favor a sharp increase in the marginal income tax rate to 70%.

Some economists, such as Nobel Prize economist Peter Diamond, have said that a 70% marginal tax rate will not hurt the economy.

And now even formerly conservative/libertarian economist Lanny Ebenstein, a Cato adjunct scholar and author of biographies of Hayek and Friedman, is writing a book entitled “Tax the Rich More.” He recommends a super tax on the rich.

Many historians point to the 1950s as a time period when the marginal rate was 91% and the economy was booming.

Yet correlation is not causation. The economy was coming out of the devastating World War II period during the 1950s and there was a rebuilding process. Plus, global trade was booming.

Also, there were plenty of loopholes and exemptions during the Eisenhower era. According to research by Scott Greenberg of the Tax Foundation, the top 1% of taxpayers paid an average tax rate of only 17%. See this short video by Johan Norberg of “Free to Choose” Network on raising the marginal tax rate to 70%.

Raising the rate to 70% today would be extremely damaging to the economy, now that most loopholes and exemptions have been taken away or severely limited.