Seeing a Slowdown, but No Recession!

A survey by the National Association for Business Economists this week showed that 74% of economists now predict a recession before 2021.

What could cause a recession? It could be a combination of factors — the U.S.-China trade war, tight money or a geo-political disaster. In July, the U.S. government announced that real gross output (GO), the broadest measure of economic spending, rose only 1.6% in the first quarter, much less than real gross domestic product’s (GDP) increase of 3.1%. For my press release on first-quarter gross output (GO), go to www.grossoutput.com.

The Economic Leading Indicator Index, put out by the Conference Board, declined for the first time this year in June. The Conference Board reported, “The US Leading Economic Indicators Index fell in June, the first decline since last December, primarily driven by weaknesses in new orders for manufacturing, housing permits and unemployment insurance claims.”

A negative yield curve — where short-term rates are higher than long-term rates — also is evidence of a possible recession. The last two times we had an inverted yield curve (2000 and 2007) we had recessions.

The Conference Board added, “For the first time since late 2007, the yield spread made a small negative contribution. As the U.S. economy enters its 11th year of expansion, the longest in American history, the index suggests growth is likely to remain slow in the second half of the year.”

If the inverted yield curve continues, it would suggest a slowdown ahead and perhaps the end of the 11-year bull market.

There is growing talk in the White House for the need to stimulate the economy to prevent a recession, through tax cuts and more government spending. More importantly, monetary policy is already starting to loosen. As the following chart indicates, the broad-based money supply (M3) is now growing at 9.3% a year in the United States. 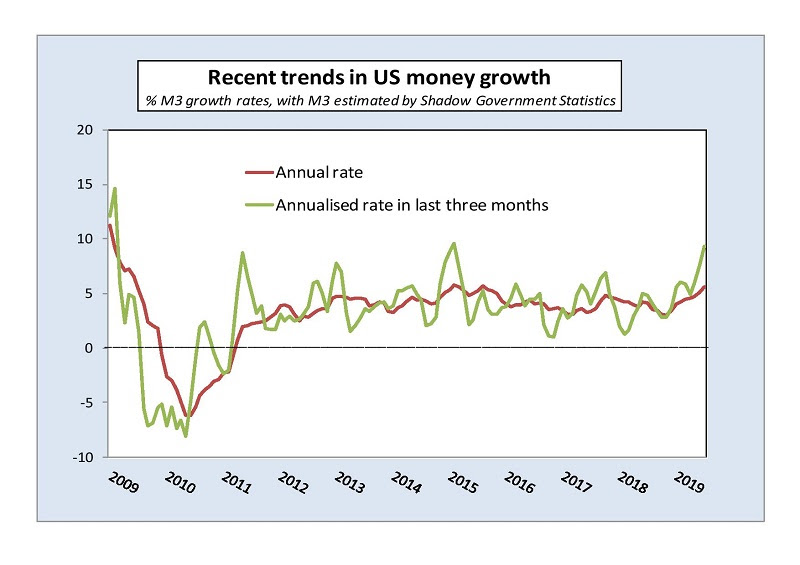 That probably means the slowdown in economic growth in the United States is temporary. A full-scale recession is unlikely at this stage.

I will be making a special appearance dressed as Ben Franklin!

Gold is back! Join me for the New Orleans Investment Conference, Nov. 1-4, 2019, Hilton Riverside Hotel. Speakers include Dennis Gartman, Kevin Williamson, Steve Moore, Rick Rule, Mary Anne and Pamela Aden, Doug Casey, Adrian Day and Peter Schiff. This is the granddaddy of gold bug conferences and I’ve been speaking there nonstop since 1976! All details can be found at http://neworleansconference.com/noic-promo/skousen/.

Argentina last week failed once again to elect a statesman who can make the country great again.

It has been more than 100 years since Argentina was ranked one of the richest countries in the world due its agricultural prowess. But it’s been downhill since Juan Peron and his fellow Peronists ruled the South American country. There have been attempts to reverse the downward trend, such as the election of Carlos Menem (1989-1999) and more recently Mauricio Macri (2015-2019).

Unfortunately, both Menem and Macri failed to overcome the big spending policies of the Peronists and made the mistake of financing the growing deficits through inflation.

Now the Peronists will be back in power in November. The disaster continues.

But it can’t be worse than Venezuela. Speaking of which…

In 1968-69, Dave Phillips and I were Christian missionary companions in Venezuela and later Colombia as part of the newly formed Colombia-Venezuela mission… And we’ve been friends ever since. 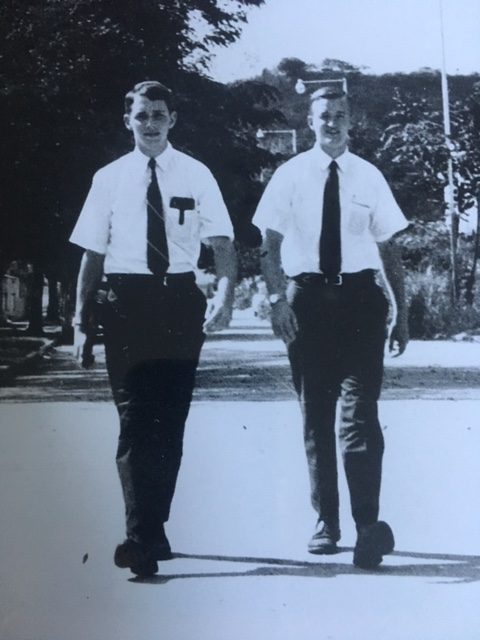 Dave Phillips and Mark Skousen serve as missionaries together in Venezuela in 1968.

Dave is the founder and president of Phillips Estate Planning Specialists, Inc., in Arizona, and comes every year to FreedomFest to speak on estate planning and insurance. (Go to his website www.epmez.com.)

Fifty years ago, Venezuela was the richest country in South America and ranked #10 in terms of economic freedom. Colombia was one of the poorest nations in South America, suffering from crime and illegal drug smuggling.

Now it’s a reversal of fortune. According to the latest Heritage Foundation’s Economic Freedom Index, Colombia is now the #1 freest country in South America, and one of the richest, and Venezuela is the least free and one of the poorest (#32, dead last, even worse than Cuba, #31).

Who would have guessed? Can’t any of the Latin leaders learn from the Chile model?