In recent months at my home in Florida, I was going through some old editions of my newsletter, “Forecasts & Strategies,” and came across an incredible prediction I made some 37 years ago. It occurred in September 1985 during a debate at a hard-money conference in Zurich, Switzerland.

Participants in the debate included Howard Ruff, Jack Pugsley, and Gary North — all gold bugs and prophets of doom. All three have passed away.

The topic of the debate was “Will the Bond Market Collapse Under Double-Digit Inflation?”

As you can see below, I was the outlier in this debate, having left the gold bug camp when Ronald Reagan was elected president in 1980 (when I started my newsletter).

My prediction is found in the final paragraph, but be sure to read the entire issue to get my perspective.

Will the Bond Market Collapse Under Double Digit-Inflation?

The main debate before the panel of hard-money investment writers in Zurich was, “Will the bond market collapse when double-digit inflation returns?” Participants were Howard Ruff, Jesse Cornish, Gary North, Jack Pugsley and myself. Ruff, North and Pugsley argued strongly for the return of massive inflation, precipitated by the huge growth in personal, corporate and government debt. Ruff predicted inflation and interest rates exceeding 20% in the next few years. North expected double-digit inflation “within the next 24 months,” and a “collapse of the bond market.”

For several reasons, I strongly disagreed with both of them. Not that I’m a “deflationist” — I don’t expect a collapse in consumer prices, as James Dines and others have suggested. But I am convinced that the “high-interest, low-inflation” trend will still have some time left — perhaps until the early 1990s. Trends always last longer than expected. I told the audience that politically and economically there is no way this country, under Ronald Reagan, would stand for a return of a 21% prime rate and 17% mortgage rates. Those days are gone, for now anyway. Sure, credit expansion continues at high rates, but it is still controllable, in my judgment. And the figures on prices and production bear me out.

I don’t think there’s any chance whatsoever that the bond market will collapse, and that “no one would care,” as North and Ruff suggested. Somebody needs to do some research. The bond market is ten times larger than the stock market. Bonds are not owned primarily by individual investors, but by institutions — banks, insurance companies, pension funds, colleges and foundations. These institutions are highly influential and aren’t going to sit back and see their investments collapse. Besides, the bond market has staged a healthy comeback, despite many hard-money advisers’ talk of “doom and gloom.”

Sometimes I feel disillusioned with the hard-money camp. Yes, I’m a believer in gold and silver as a “survival” hedge and as a monetary standard. I support less government intrusion in our financial, business and personal lives. But I don’t bury my head in the sand and constantly harp on the same song year in and year out when the trend is clearly in the opposite direction. For that reason, I’ve switched my emphasis in the 1980s away from hard assets and toward the more traditional investments of stocks, bonds and money market funds.

Will the bond market collapse? No, not for the next few years, at least. Interest rates will continue to stay above the inflation rate, at least until we see a return to the days of runaway inflation under a Democratic president.

Indeed, the Democratic president who brought back runaway inflation was not Bill Clinton or Barack Obama, but Joe Biden. My timing was off. Even I was surprised that it took so long. The bull market in bonds and stocks lasted for another 37 years, until 2022, when the easy-money and big-spending policies in Washington finally caught up with us.

What is My Prediction Now?

The burst of price inflation began after the irresponsible policies in Washington. It is here to stay for a while. Both Democrats and Republicans have worked together and aggressively expanded the size and scope of government in the past two years, and after passing the $1.7 trillion stimulus package, I see no sign of retrenchment.

However, at the Federal Reserve, monetary policy is a different story. Jay Powell and the Fed are determined to reverse the easy-money policies of the past. The stock of money has stopped growing, and the price of money (interest rates) is going up fast. We are now suffering from a negative yield curve, where short-term interest rates (4.2%) are higher than long-term rates (3.8%). As a result, we are suffering a bear market on Wall Street and will probably suffer a recession in 2023 and maybe even a monetary crisis.

At some point, the Fed will panic and reverse course if the recession gets bad enough. Until then, I recommend you have a well-diversified portfolio of conservative investments and high-income stocks and mutual funds, as well as a sizable cash position to buy bargains when the stock market turns around.

You Blew It! Inflation is a Double-Whammy

For most Americans, rising price inflation is the #1 worry today, and for two good reasons.

First, easy money and overspending by the government in the past two years have resulted in sharply higher prices for basic necessities, including food, rent, utilities and entertainment.

I noticed everything going up in price at the gasoline pump and the grocery store. Even the local donut shop raised their prices for a glazed donut from 95 cents to $1.25 in the past year.

The only exception was Munchies Peanuts. For years the large bag sold for 99 cents, a real bargain. They didn’t raise their prices for the past two years.

But guess what? They just raised the price of a bag of Munchies Peanuts from 99 cents to $1.09. (See below.) 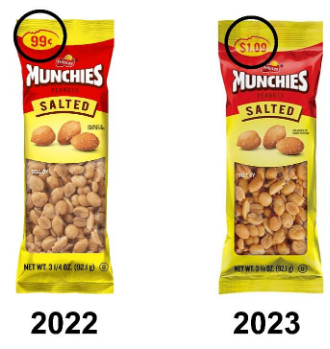 Price inflation also creates what is called “Shrinkflation,” where companies try to hide price increases by reducing the size of products. I noticed that tubes of Crest toothpaste were reduced from 4.1 ounces to 3.8 ounces without a change in price. Folgers coffee reduced its 51-ounce container to 43.5 ounces. Even toilet paper size has shrunk.

The end result is that you get less for your money. Shrinkflation is so pervasive that even The New York Times ran a front-page story on it.

The other downside to inflation is that most of your investment portfolio — your financial assets you need for retirement and other uses — falls sharply. Wall Street has been in a bear market ever since inflation came back, and the Fed has raised interest rates to keep up with inflation.

The sooner the Fed ends inflation, the better.

Orange County, California, AAII Investment Meeting, Jan. 14, 2023: I’ll be speaking at the Orange County, California, chapter of the American Association of Individual Investors (AAII) on Saturday, Jan. 14, at 9 a.m., on the topic, “Investing in 2023: Should You be a Bull, Bear or Chicken?” The address of the meeting is The Center of Founders Village, 17967 Bushard St., Fountain Valley, CA, 92708. To reserve a spot, email Stephanie at sdavis388@gmail.com. There is a nominal charge for attending.

Last chance to save big bucks on Ahern Hotel rates for the EconoSummit, March 11-12, in Las Vegas: Once again, my wife, Jo Ann, and I will be speaking at this popular annual event, sponsored by the Investment Club of America. Two keynote speakers have been confirmed: John Fund, senior writer for National Review and an expert on geopolitics; and Floyd Brown, publisher of the Western Journal and author of the new book “CounterPunch.” Other speakers will be added soon. The price is only $199 per person.

But most importantly, I urge you to reserve your room at the Ahern Hotel as soon as possible for only $159 a night. Call 1-725-414-4800, ext. 2, and use the code HighMark to get the discount. This discounted price ends this weekend! Our conference is being held during March Madness, when hotel rates will surge to over $300 a night in Vegas. So, I recommend you book your room now. For more details, go to www.econosummit.com.