Is This the #1 Burning Issue Facing America?

“Climate change is the number one issue facing humanity. Unchecked, it is going to bake this planet. This is not hyperbole. It’s real.  And we have a moral obligation.” — President Joe Biden

One headline this week was scary:  “U.S. will see one foot of sea level rise by 2050 because of climate change.”

“Sea level rise driven by global climate change is a clear and present risk to the United States today and for the coming decades and centuries,” the report stated.

Yahoo News blamed the rise in sea levels and global warming on “mankind’s burning of fossil fuels, leading to warmer average temperatures. Higher temperatures are not only causing glaciers and the polar ice caps to melt, but also resulting in a process known as thermal expansion, by which the atoms in water expand, further exacerbating sea level rise.”

The Biden administration is proposing a rapid transition from fossil fuels to renewable energy, claiming it will “create millions of new jobs.”

Is this a good idea?

In my “Modern Political Economy” class at Chapman University this week, we examined both sides of the global warming/climate change debate.

It’s a polarizing and heated debate in academia and among students.

In my new edition of “The Making of Modern Economics” (Routledge, 2022, available at www.skousenbooks.com), I wrote two pages about William Nordhaus, the Yale professor who won the Nobel Prize in Economics in 2018 for his work on climate change.

Before our discussion, I polled the students anonymously via Zoom.

The first question was: “Are you an alarmist or a skeptic about the threat of global warming/climate change?”

The second question was “Has air pollution gotten better or worse in the Los Angeles area since 1960?”

44% said air pollution here had gotten worse, and 56% said it had gotten better.

I then showed them this chart: 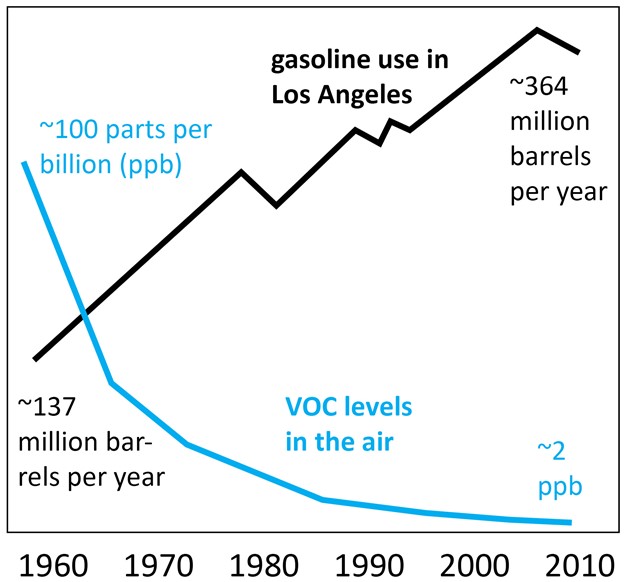 It clearly shows that even through gasoline use has increased dramatically in the Los Angeles area, air pollution has dropped sharply. We’ve made significant progress in reducing greenhouse gases in California, and across the United States in general.

It was an eye-opener to students who had been indoctrinated throughout their school years that the environment was only getting worse and that  action needed to be taken immediately, or we were doomed.

I firmly believe that students deserve to hear both sides of an issue, and then make up their own minds. As the great scientist Benjamin Franklin opined, “By the collision of different sentiments, sparks of truth strike out, and political light is obtained.”

Is the Climate Science Settled?

Unfortunately, many pundits, including government officials, believe the “science of climate change has been settled,” alleging that 97% of climatologists agree that the world is heating up and that it’s caused primarily by humans.

The 97% figure was based on a small sample of climate scientists. A much broader survey was done in 2013 by the American Meterological Society, which found that only 52% of all respondents agreed that global warming was “mostly caused by humans.”  Among climate scientists, the percentage was higher, 78%, but this was still nowhere near the 97% figure. For more information, go here.

I haven’t seen an updated survey, and scientists may have changed their minds in the past decade.

On the Alarmist Side of the Debate

The alarmist side of global warming can be seen here in a recent NBC News interview with former vice president Al Gore, producer of the film “An Inconvenient Truth.” Watch it here.

There is also a website by the climate scientist Tamino, who is a frequent critic of global warming doubters. Click here to see it.

On the Skeptic Side of the Debate

On the other hand, there are many skeptics who question the data and the policy recommendations of the alarmists. Here is a short, 12-minute video presentation by geologist engineer Tony Heller.

Warren Buffett is a Surprising Skeptic

I was surprised to learn that Warren Buffett, the CEO of Berkshire Hathaway, is not in the alarmist camp.  In its 2016 annual shareholder meeting, he was asked about GEICO, Berkshire’s primary insurance business. It is priced annually, unlike life insurance, where a company is setting a price for decades into the future.

Buffett has said that this is the key: “I see nothing that tells me on a yearly basis that global warming is something that should cause me to change my prices a lot, or even a small amount.”

His partner, Charlie Munger, said: “I don’t think it’s totally clear what the effects of global warming will be on extremes of weather. I think there’s a lot of guesswork in that field and a lot of people who like howling about calamities that are by no means sure, like a crazy ideology. Not that global warming isn’t happening, just you can get so excited and make crazy extrapolations that are not necessarily correct.”

We’ve debated climate change and global warming several times at my annual FreedomFest conference, and we will do the same again this year. I hope you will join us at www.freedomfest.com. Remember to use the promotional code EAGLE in the final registration step online, just before paying with your credit card.

Who’s right?  Having lived a long time, I’ve witnessed a series of doom-and-gloom predictions — such as that we are headed for another Great Depression, that hyperinflation is just around the corner and that the world is going to come to an end soon due to pandemics, nuclear war, global warming or the Second Coming. None of them have happened so far.

Thanks to creative entrepreneurs and half-decent leaders, we have survived and prospered into the 21st century.

The economist Mark Perry at the American Enterprise Institute recently catalogued 50 doomsday predictions by environmentalists, none of which have come true. You can see them here.

I have homes in both Florida and California, and I haven’t seen much change in decades when it comes to rising sea levels, the number of hurricanes or storms. As far as the California fires are concerned, I think they have more to do with government mismanagement than global warming.

Sea levels have been rising for centuries, but the rise has been gradual.

In short, I remain a skeptic.

P.J. O’Rourke: All Hail to a Great Libertarian Humorist

This week, the  famed libertarian humorist P. J. O’Rourke died, a victim of lung cancer, at the age of 74.  We shared the podium a couple of times, once at the New Orleans Investment Conference in the 1990s (when I appeared as General George Patton), and at FreedomFest in 2014.

He was funnier than Will Rogers. His signature book was “Parliament of Whores,” where he mocked both Democrats and Republicans by writing:

This was his best line: “God is a Republican. Santa Claus is a Democrat.”

You can watch him on a panel at FreedomFest 2014 with Charles Murray and John Allison on the topic “What Can Save Us from Big Government?” You can watch it here (the video is only 10 minutes long).

FreedomFest will be sponsoring the first Libertarian Comedy Fest in July, ad we will dedicate the room to P. J. O’Rourke. Remember to use the promotional code EAGLE in the final registration step online just before paying with your credit card.

Here’s our fun, one-minute-long “shout out” video to another comedian, Joe Rogan, who recently interviewed the libertarian comedian Dave Smith.

If it goes viral, who knows?  Maybe Joe Rogan will show up.