Is the Tide Turning in the Pandemic, Politics and Stocks?

“Only when the tide goes out do you discover who’s been swimming naked.” — Warren Buffett (“Maxims of Wall Street,” p. 123)

Note: I have a special announcement today. See below.

Are we seeing a turning of the tide this year when it comes to the fight against the pandemic, the November elections and the stock market?

A few days ago, I met up with Bert Dohmen, longtime editor of The Wellington Letter, at his home in California. He sent me his latest newsletter with the classic headline, “Turn of the Tide?”

That headline is famous because it’s the same headline that William Hamilton, editor of the Wall Street Journal, used on October 25, 1929, to announce to the world that the Dow Theory “gave the signal of a bear market in stocks.”

His declaration came within days of the crash on Wall Street. On Black Monday, October 28, 1929, the Dow declined nearly 13%. On the following day, Black Tuesday, the market dropped nearly 12%. The slide continued through the summer of 1932, when the Dow closed at 41.22, its lowest value of the twentieth century and 89% below its peak. The Dow did not return to its pre-crash heights until November 1954.

Bert Dohmen senses a bear market coming in 2022. He warned his subscribers that the stock market was topping out and would head south. “Reality is returning, at least to some sectors,” he wrote. “Eventually, it will return to most sectors. That will be painful. The technology sector continues to get hammered and should be shunned.”

The jury is still out, but there is no doubt that Wall Street has had an incredible run during this “Mother of All Bull Markets.”

We at Forecasts & Strategies have taken full advantage and have, until now, ignored the perma-bears who are constantly predicting the end of the world.

To quote J. Paul Getty, America’s first billionaire, “Businessmen can profit handsomely if they will disregard the pessimistic auguries of self-appointed prophets of doom.” (Maxims, p. 112)

Nevertheless, bear markets do raise their ugly head from time to time. As the French philosopher, Bertrand de Jouvenel, states, “A forecast is never so useful as when it warns man of a crisis.” (p. 112)

What Will the Future Bring?

I would not be surprised to see a major correction in the market this year. It’s long overdue. It may be in reaction to the Federal Reserve raising interest rates in an effort to curtail inflation; another lockdown of the global economy in response to the never-ending pandemic; Biden pushing through sharply higher tax rates and regulations; geo-political instability in Asia or the Middle East or a natural disaster.

Alex Green, investment guru at the Oxford Club, states, “The market has turned more volatile in recent weeks as investors grapple with the lightning-fast spread of Omicron, high inflation, global supply chain issues and the likelihood that the Federal Reserve will begin raising interest rates as early as March.”

Nevertheless, Green is optimistic: “The flip side of this, of course, is that Omicron is rapidly taking us closer to herd immunity, higher interest rates will moderate future inflation and supply chain issues are already beginning to abate.”

Making a Difference in the Classroom

As long-term subscribers know, I’ve made a career out of influencing our future generation into understanding how the real world works and what economic policies should be adopted to achieve: peace, prosperity and liberty.

My two most popular textbooks are “Economic Logic,” which is now in its fifth edition, and “The Making of Modern Economics.”

The New, Fourth Edition of ‘Making of Modern Economics’ is Out!

Good news! The brand-new fourth edition of “The Making of Modern Economics” has just been published by the prestigious publisher Routledge (publisher of the works of Friedrich Hayek).

Guess who the hero is of my book? 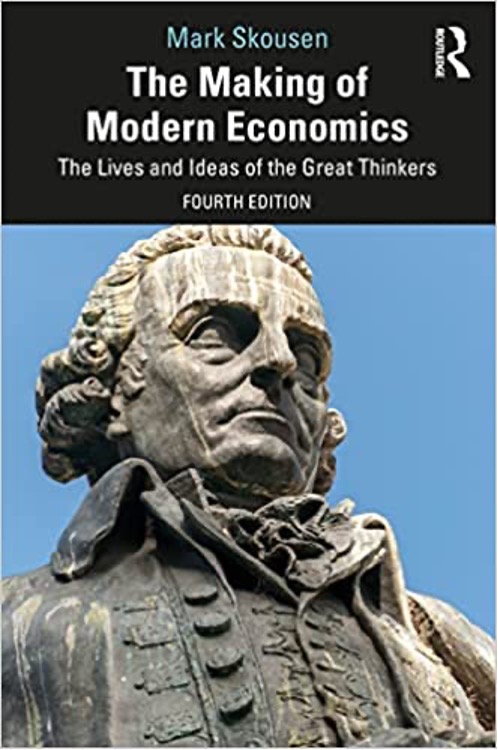 It is now the most popular history textbook of the great economic thinkers used in the classroom. As Roger Garrison, professor at Auburn University, states, “My students love it. Skousen makes the history of economics come alive like no other textbook.”

It is the only history textbook that reads like a novel, with a hero (Adam Smith and his “system of natural liberty”) who constantly comes under attack by the socialists, Marxists and Keynesians. He is sometimes left for dead but then is miraculously resuscitated by the French laissez-faire school of thought, the Austrians, the supply-siders and the Chicago School of economics.

Spoiler Alert! It even has a good ending when the Adam Smith model triumphs with the collapse of the Berlin Wall and the Soviet socialist central planning model.

The book is award-winning. It has won the Choice Book Award for Academic Excellence, and it was ranked #2 Best Libertarian Books in Economics by the Ayn Rand Institute (behind Henry Hazlitt’s “Economics in One Lesson”).

Here’s what reviewers are saying:

“The most interesting and lively book on the history of economic thought ever written.” — Douglas A. Irwin, Dartmouth College, UK.

“All histories of economics are BS — Before Skousen! Live and accurate, a sure bestseller.” —Milton Friedman

“Mark’s book is fun to read on every page. I have read it three times. I love this book and have recommended it to dozens of my friends.” — John Mackey (CEO, Whole Foods Market)

“Mark Skousen is a great economist, great entrepreneur and great friend. His book brings history to life, with concise and incisive sketches of flesh and blood individuals. Read it!” — Steve Forbes

Routledge charges $54.95, plus shipping, but you can buy it directly from the author for only $35. Each copy is autographed, dated and mailed for no extra charge if mailed inside the United States.

To buy your copy, go to www.skousenbooks.com.

‘Turning the Tide’ in Las Vegas!

One of our goals is to reverse this dangerous trend in the size and scope of government, both here and abroad: 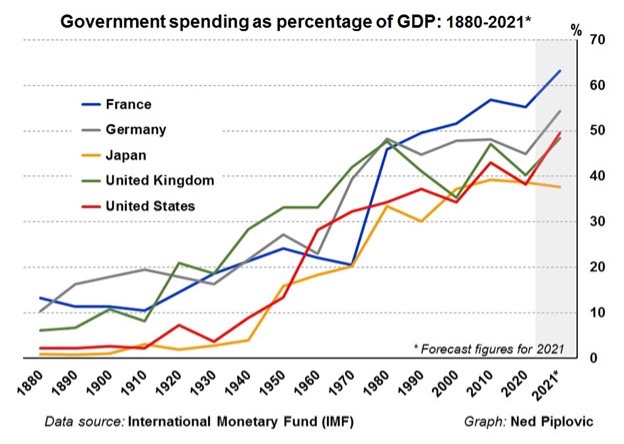 Our liberties are under attack, that’s for sure.

We have a great lineup of speakers, including the return of Steve Forbes, Grover Norquist, Steve Moore, John Fund and many other top geopolitical activists who are experts in turning the tide in politics and economic policy.

We just confirmed Glenn Greenwald, the American journalist famous for revealing U.S. global surveillance programs based on classified documents provided by Edward Snowden. You won’t want to miss his talk.

FreedomFest is Famous for Its Debates

We also have Ben Stein and Arthur B. Laffer. In the famous scene in “Ferris Bueller’s Day Off,” Ben Stein plays the boring teacher who refers to the Laffer Curve as “voodoo economics.” To watch that memorable one-minute scene, go to Voodoo Economics — YouTube.

In 2002, Ben Stein was our keynote speaker at FEEFest, the precursor to FreedomFest. Now, 20 years later, he will make his second appearance… and he has agreed to debate Arthur B. Laffer, one of the founders of supply-side economics and the inventor of the famous Laffer Curve. They will appear together on stage at FreedomFest 2022 to debate the question, “Should the Rich Pay More in Taxes? Is the Laffer Curve Voodoo Economics?”

After the debate, Ben Stein will host a luncheon on the topic, “Rich and Famous: My Life in Beverly Hills and Hollywood.”

‘Is God Making a Comeback?’

In 1966, Time Magazine ran a famous cover story, “Is God Dead?” According to Time, modern science had eliminated the need for religion to explain the natural world, and God took up less and less space in people’s daily lives. 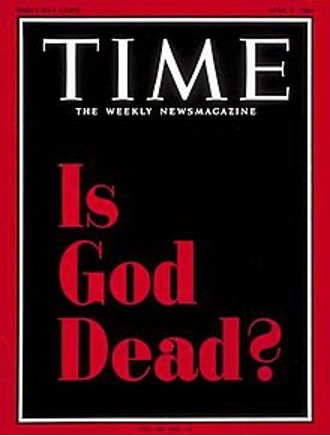 But now, religion is making a comeback, according to the New York Times bestselling author of the new book, “Is Atheism Dead?” Eric Metaxas provides new scientific and archeological evidence against the idea of a Creator-less universe. I’ve read it and find it compelling. 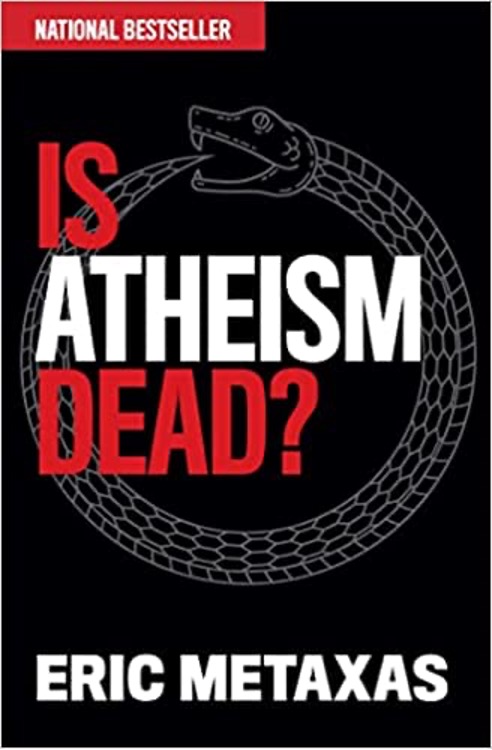 Eric Metaxas will be debating Michael Shermer, publisher of Skeptic magazine and author of “Why Darwin Matters” and other important books, on “Is God Making a Comeback?” I look forward to it.

After their debate, both will be autographing their books at the FreedomFest bookstore.

Use the code EAGLE to take advantage of our early bird special of $399 per person, and only $299 for guests (up to three guests). Register today!

Why We Left New York

Last year, we sold our home in New York and said goodbye to my favorite city in the United States. We had had enough of the lockdown, the loss of Broadway, the Lincoln Center and the university clubs. Crime was rising, and “Manhattanites” wanted out of the city.

It was time to move on.

I saw that Mark Ford of the Oxford Club wrote a column, “Goodbye Bill. I Won’t Miss You.”

He states in part:

“I’ve not lived there for 40 years, but in some ways, I still consider myself a New Yorker. Like most expatriates, I identify with everything that is great about the city. And there used to be so much. Lately, however, it has devolved in several critical respects. This is largely due to the woke politics of Bill de Blasio and a cast of cronies, including the infamous AOC. For example:

* New York has also lost many big and vibrant businesses due to higher taxes and soaring crime. And it has lost hundreds of restaurants and retail stores due to the COVID lockdown.

* Murders are up 50%. Rapes are up 25%. Even my wokest friends, loyal denizens of the city, feel it’s unsafe to take a walk at night.

* Plus, New York has become the dirtiest city in the country. Its infrastructure is crumbling. Its sanitation is Third World.

“But it can recover. The Big Apple has been rotten before. It was dirty and dangerous when I was in my teens. And it came back beautifully from that. Its best hope is its new mayor, Eric Adams. He’s got his work cut out for him. But as a former policeman, he seems to understand that the first priority in fighting crime is a belief in law and order. Whether he will actually do anything about that remains to be seen.”

Even Mayor Eric Adams is going to have a hard time. Alvin Bragg, the newly elected district attorney, has issued a memo entitled “Achieving Fairness and Safety.” His policy includes de-prosecuting entire categories of crimes and slashing sentences. They are a “recipe of violence and disorder,” according to the Manhattan Institute.

Looks like New York is going the way of San Francisco. What a pity.