A Better Alternative to ‘Left’ and ‘Right’ Politics

In today’s world of divisive rhetoric and hostile debates, it’s easy for the media and pundits to divide people into camps, such as “left” wing or “right” wing.

We see it all the time on cable TV, the internet and the print media. Often, it’s a smear tactic used to demonize people who have different political views than whoever is making the judgment. And once someone is labeled, thinking stops and emotional name calling begins.

There’s a lot of bad blood, and neither side seems interested in talking to each other anymore.

The left-right political spectrum is out of date and misleading. My friend Alex Green, chief investment strategist for the Oxford Club and a bestselling author, has a better approach. According to Alex, these days people either lean toward being “libertarian” or “authoritarian.” Libertarians want to make their own choices, while authoritarians want to impose their will on others.

We are seeing this distinction being played out in the past two years during the pandemic and lockdowns. Libertarians prefer democratic, decentralized decisions made by individuals, parents, businesses, teachers and local government. Authoritarians favor mandates coming from the top down under central control by the federal or state government.

Tom Palmer, senior fellow at the Cato Institute and a vice president at Atlas Network, has written a book with an appropriate title for today: 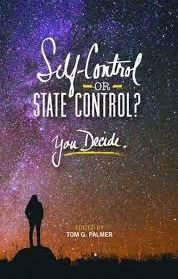 Lin Yutang, the great Chinese philosopher, wrote in “The Importance of Living” in 1937, “Clearly two opposite views of human dignity are possible: the one believing that a person who retains his freedom and individuality is the noblest type, and the other believing that a person who has completely lost independent judgment and surrendered all rights to private beliefs and opinions to the ruler or the state is the best and noblest being.”

Ben Franklin warned at the Constitutional Convention of 1787 that this “constant warfare between the governing and the governed” has in the past led to “occasioned convulsions, actual civil wars, ending in either dethroning of the princes or enslaving of the people.” Let’s hope it never comes to that.

Coming Together at FreedomFest

At my FreedomFest conference, we insist on civil discussions and debates. There’s a reason why we call it “the world’s largest gathering of free minds.” We expect everyone to have an open mind about differing views. Our approach has been highly successful. Last year, we had a record crowd of nearly 3,000 people. In our mock trial, we put the “Pandemic and the Lockdown on Trial,” and it was both educational and provocative. Everyone benefited from hearing both sides without rancor.

If we truly believe in individualism, then perhaps it’s time to treat each other as individuals, with unique views, rather than immediately labeling them conservative, liberal, progressive or socialist.

Unfortunately, the popular trend is to sort people into groups and classes. To quote Lin Yutang again: “We no longer think of a man as a man, but as a cog in a wheel, a member of a union or a class, a ‘capitalist’ to be denounced, or a ‘worker’ to be regarded as a comrade. We are no longer individuals, no longer men, but only classes.”

Sometimes I think that labels are just a lazy way to put people in political boxes, rather than focusing on the pros and cons of the issue at hand.

At FreedomFest, we focus on “best solutions” rather than labels. Check it out at www.freedomfest.com.

I was a long-time friend with the free-market economist Milton Friedman. He firmly believed that if everyone was given all the facts and an understanding of sound economics, 90% of the people would come to an agreement on a particular issue. In his way of thinking, his opponents were not evil, but just ignorant of the facts and correct theory.

Your editor spending time with Milton Friedman at his San Francisco apartment in 1999.

I have used this approach in teaching at Chapman University and in my lectures to other colleges and universities. For example, students are divided about the $15 minimum wage debate. Some favor it as a way to help the working poor; others believe it hurts the very people it’s supposed to help by causing unemployment, reduced hours or being replaced by machines.

I objectively do a cost-benefit analysis, showing how some people benefit and others are hurt by the government-imposed wage increase. Then I introduce some natural ways to raise wages without resorting to the law, pointing out that increased profits, productivity and education usually result in higher wages.

Students love this unemotional approach. After going through this economic analysis, most students reject the artificial means (minimum wage) in favor of natural ways to raise wages.

The Spectrum vs. the Totem Pole Approach

In my popular book “The Making of Modern Economics,” now in its 4th edition published by Routledge, I developed an alternative to the standard left-center-right political spectrum (see below), which I regard as misleading at best and divisive at worst.

Instead, I came up with what I call the Totem Pole approach: 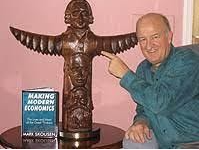 “The Totem Pole of Economics” by Jamie Sagui.

Here I have Adam Smith and his “system of natural liberty” at the top for maximum liberty and economic growth; Keynes is second — big government may be more stable than laissez-faire capitalism, but results in slower growth; and the low man on the totem pole is Karl Marx, offering minimal freedom and little or no growth in the economy.

Years ago, I stopped using the divisive and misleading “left” and “right” political labels, and now focus on individual issues and “best solutions” before judging economists up or down. Adam Smith and Karl Marx are not equals!

Making a Difference in the Classroom

As long-term subscribers know, I’ve made a career of our influencing and transforming the minds of our future generation into understanding how the real world works and what economic policies should be adopted to achieve peace, prosperity and liberty.

In 2018, Steve Forbes presented me with the Triple Crown in Economics for my role in theory, history and teaching. 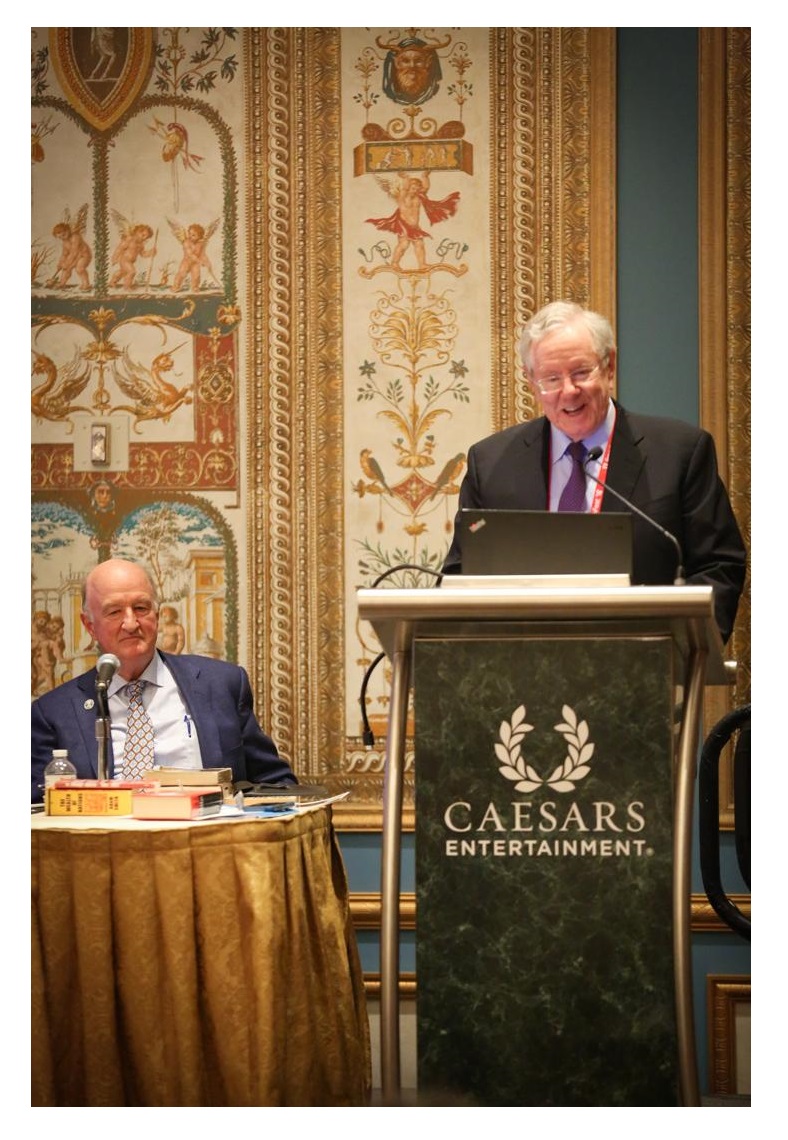 He stated, “Mark is a superb and highly original scholar. Just look at his textbook “Economic Logic,” now in its 5th edition, which demonstrates Mark’s ability to look at the whole economy, the real world and real people. This rigidity between micro- and macroeconomics is not for him. He realizes they’re all connected together. He began this book with a profit-loss income statement to demonstrate the dynamics of the real-world economy. No other textbook does that. He gets it.

“And extraordinarily, Mark’s book brings in many other disciplines to teach lessons of economics, underscoring crucial lessons, whether it is history, sociology, finance business or marketing management. He recognizes that this rigidity may be nice for departments created at universities. But, in the real world, it does not advance learning. They need to be combined together. In that sense, he goes back 200 years to before mathematicians took over economics. His output is voluminous, with numerous books and articles. And, what is so unusual, is that he combines mastery of math-laden fields with the ability to write clearly and directly in a manner that would have elicited cheers from Ernest Hemingway. Imagine, he gets to the point.

“So, you won’t win an economic argument with Mark by trying to outdo him with regression analysis, graphs and comprehensible equations. He’ll hit you right back. He’s a master of that.

“But, he’s unique with his fascination with history, with flesh and blood individuals. Read his concise and incisive sketches of numerous economists in “The Making of Modern Economics.” He brings history to life. People are interested in people. He recognizes that stories are highly instructive.” 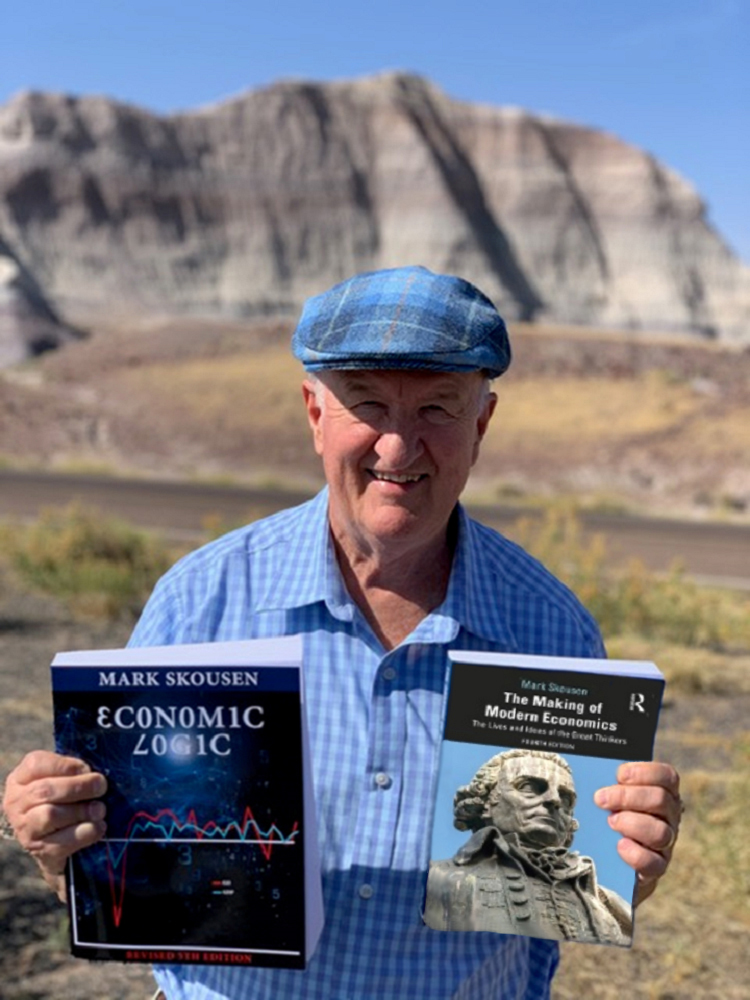 The 4th edition of “Making of Modern Economics” updates the dramatic story of economics with the challenges of modern monetary theory, the COVID-19 pandemic, climate change, minimum wage debates, the new socialists, and more.

Both books are available at a sizeable discount — half the retail price, only $35 each — if you buy them at www.skousenbooks.com. I sign each book and mail them at no additional charge if mailed inside the United States.

You Blew It! Guess Which City Has the Most Bridges in the World – and One Just Collapsed

It’s hard to believe, but Pittsburgh, Pennsylvania, has 446 bridges, the most of any city in the world, even more than Venice, Italy.

According to engineers, 40% are in poor condition and need upgrading. Last month, the Frick Park Bridge in Pittsburgh (named after Henry Clay Frick, the famous chairman of Carnegie Steel) collapsed.

President Joe Biden previously had been scheduled to visit Pittsburgh on the same day to tout his new $1.2 trillion “infrastructure” bill, and predicted, “I will fix them all.”

If fixing bridges and roads is Biden’s top priority, then why is it that only $24 billion (20%) of the infrastructure bill was assigned to roads and bridges? The remaining hundreds of billions go to mass transit, Amtrak, windmills and solar panels.

Every new upgrade and construction federal site will require union workers, resulting in an unnecessary 25-35% increase in the costs of building.